The southern Malay-Thais rank particularly low on key measures of inequality, a situation that helps to fuel the conflict in the deep South. (File photo)

In the spirit of Sustainable Development Goal 10, which seeks to reduce inequality, Thailand's first major national study on differences in development by ethnicity was recently published.

The research finds gross inequalities in development by ethnicity that serve to partially explain the 2010 political conflict and the conflict in the deep South. The study also challenges political parties to suggest solutions to the problems of the extreme inequality.

Thailand has a "high" level of human development on the UNDP Human Development Index, ranked at 83rd in the world from 189 in 2017. However, the wealth inequality in Thailand remains dire and is very high, with Thailand ranking 4th out of 213 territories for wealth inequality, according to Credit Suisse. The top 10% of Thais own 61% of all titled land, while the bottom 10% own just 0.1%. Additionally, approximately 8.8 million people are officially poor, according to the UNDP.

This inequality is evident along both regional and ethnic lines and is an underlying cause of ethno-political conflict, as seen in the 2010 uprising in Bangkok and the provinces by red-shirt protesters, which largely followed ethnic lines in terms of actors and locations.

Thai national development planning has historically been anti-poor. According to a 2012 World Bank report, the majority of Thailand's state expenditure, 72%, is spent in Bangkok, which is home to only 17% of the population, mainly Central Thais and assimilated Sino-Thais. In contrast, the Northeast has 34% of the population yet receives only 6% of expenditure. Almost all past research on inequality has been along individual or geographic lines as the Thai census is insufficiently detailed to provide for ethnic-based analysis.

The new study investigates the roots of a structural "ethnic penalty" for ethnic minorities by describing in detail an "ethnic gap" in Thai public policies concerning poverty and inequality.

It does this by introducing an innovative methodological solution. Using Thai government-approved data from the UNDP's human achievement index for Thailand, the Thai Office of the National Culture Commission's Ethnolinguistic Maps of Thailand report, and Thai National Statistical Office population and poverty data, scholars at the College of Local Administration at Khon Kaen University and the Political, Economic and Development Labs of Brigham Young University have compiled the country's first data set on between-group inequality by ethnicity.

Thailand's largest ethnic minority community, the Lao Thais -- the majority of northeasterners who are culturally Lao and speak Lao dialects -- rank particularly low on key measures, as do the Malay Thais -- the population which is concentrated in the deep South.

What makes this study especially pertinent, however, is the ability to break down exactly what areas each group lags behind on.

As expected, the Central Thais of Bangkok and the Central Plains have the highest overall human achievement index score. However, while they are top on education, income, employment, and transport & communications (such as the wealth-related measures), they are second to last on the housing and living environment index, driven by poor housing security, high crime levels, and a high carbon footprint. 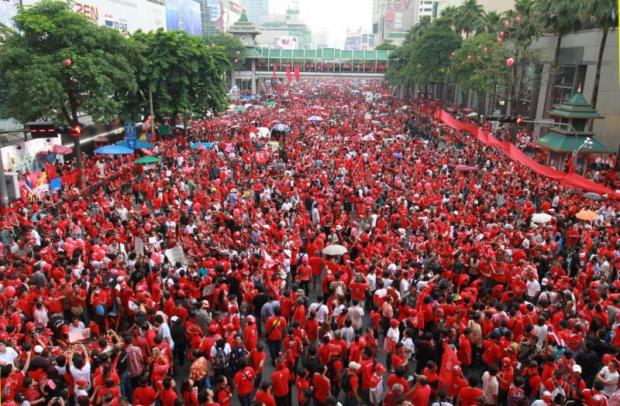 Red-shirt political protesters gather in the capital in September 2010. Thailand's inequality is an underlying cause of ethno-political conflicts. (Photo by Thiti Wannamontha)

The southern Thais -- the majority of southerners speaking Paktay dialects but excluding ethnic Malays -- rank second overall, but are top on the health measure. They rank third from last on family and community, driven by high crime rates and high working children rates.

Next, the Khon Mueang -- the majority of northerners, sometimes referred to as Lanna Thais -- rank third overall. They are middling on several measures.

What is disturbing is the low ranking of the ethnic Lao Thais. They actually rank closer to non-Thai groups overall than they do the first-ranked Thai groups. They only rank 10th in education and rank fourth from bottom on average IQ, significantly lower than all other main Thai groups. The Mon-Khmer Thais, Malay Thais and the Phuan are the three groups below the Lao Thais on average IQ. The Mon-Khmer are ethnically Khmer Thais concentrated in Buriram, Srisaket, and Surin, and the Phuan are the ethnic group spread out in small pockets over the Northeast and Central regions.

The Lao Thais are fourth from bottom on the Ordinary National Educational Test (O-Net) scores. Again, the Mon-Khmer Thais and Malay Thais are in the bottom three groups along with the Phuan on the O-Net scores.

The Lao Thais are also third from bottom on mean years of schooling, at 7.44, compared to 8.98 for the Central Thais and 8.41 for the southern Thais, though the Khon Mueang are also quite low at 7.63. The Mon-Khmer Thais and Malay Thais are in the bottom four again.

Average upper secondary enrollment is also significantly lower for the Lao Thais, at 61.7% (8th overall) compared to 81.3% for Central and 75.5% for the Khon Mueang. The southern Thais are also quite low on this measure too, at 67.9%. The Mon-Khmer Thais and Malay Thais are in the bottom three again, along with the Phuan.

The only upside for the Lao Thais is that they rank second on employment and housing and living environment.

The low rankings may also explain Malay Thais' disquiet with the military regime. However, the Malay Thais do rank top on health, driven by a top ranking on quality of life, which is composed of low rates of illness, disability, mental health, and unhealthy lifestyle. They also rank highest on housing and living environment, driven by a low carbon footprint and risk of flood as well as low crime rates. However, they rank second to last on participation.

This study provides key information and a methodology so that Thailand's political parties can craft more holistic development policies. Some policy suggestions that emerge from the study include Thailand's National Economic and Social Development Board and other national planners adopt targeted "ethno-development" to address the severe inequalities by ethnicity within the country.

Additionally, the new government should consider passing Thailand's draft National Language Policy and, in doing so, recognise all the country's ethnolinguistic groups. This could then be used to improve the accuracy of Thailand's census question on ethnicity.

Only by recognising and improving the status of Thailand's ethnic communities, and therefore promoting their social, economic, and political inclusion, will the country be able to avoid future ethnically-driven internal conflicts.