MCOT sanction must be reversed
Opinion

MCOT sanction must be reversed

The decision of the MCOT board to abruptly remove a veteran journalist from a live debate programme that was seen as opposing the military regime is deplorable. This is another example of the powers-that-be infringing on the freedom of the media. 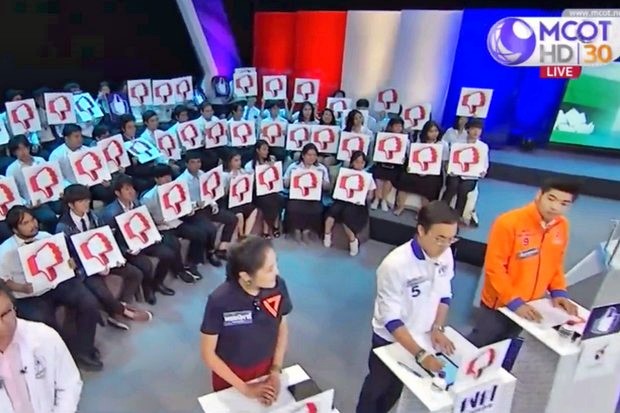 Results like this from young voters (to the question "Do you agree with Prime Minister and junta leader Gen Prayut Chan-o-cha’s decision not to debate his opponents?") displeased state power so much they removed the moderator of the programme. (Screen caps YouTube/TNAMCOT)

Journalist Orawan Choodee confirmed in a Facebook post the lightning order that pulled her from the show which she said resulted directly from a Feb 28 debate, titled "New People, New Politics", on the Modern 9 channel.

According to her post, which was later removed, the board of the state-owned MCOT accused her of "being biased" and asking the participants leading questions -- a charge she staunchly denied. Orawan, who co-hosted the programme with sharp-tongued radio host Veera Theerapat, insisted she performed her duty with professionalism.

The board's decision drew public criticism yesterday and moral support poured in for the well-respected journalist, while views of the programme soared.

The broadcasters union vowed to take action. Suwit Mingmol, president of the union, said he is looking into the exact reasons that led to the MCOT board decision.

Calling for a review, the union leader insisted the 90-min programme was praised by the majority of its viewers and was professionally ethical.

The "New People, New Politics" episode, the second in the Election War 62 show saw 10 novice politicians from 10 parties join a live debate; the first which took place on Feb 21 was a debate among leaders and top figures from four parties, namely the Democrats, Future Forward, Palang Pracharath and Pheu Thai. 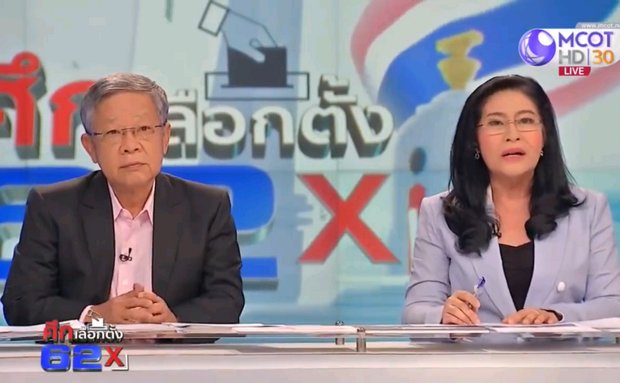 Veteran news reporters Veera Theerapat and Orawan Krimviratkul hosted 'Election War 62' on Feb 28. The next day, Ms Orawan was sacked from the show.

The Feb 28 show was observed by 100 first-time voters, representing 16 universities across the country. Each politician was required to engage in a short debate on four crucial questions, while participants were asked to vote with "like" and "dislike" signs.

The young participants overwhelmingly disapproved of the stances of the regime and/or the prime minister on the four topics, especially the role of the 250 senators in voting for a prime minister, which is a pain in the neck for the powers-that-be.

Some observers have linked a retired army man, a cadet school classmate of Gen Prayut's, who sits in the board to Orawan's removal.

Obviously, it's not a wise decision and those who were behind it should be aware that it may backfire as it may upset first-time voters who form a sizable group accounting for more than eight million. A clip of the Feb 28 show yesterday drew more than 142,000 views.

The MCOT board has yet to explain its decision. The unfortunate incident can be interpreted as the powers-that-be's urge to dominate politics further despite promises to return the country to democracy, which have proven empty if not hypocritical.

It also demonstrates the failure in the country's media reform as the state still wields an unjustifiable level of control over some outlets. This means reform advocates are obliged to work harder to free journalists of the state muzzle.

Journalistic autonomy is key to free and fair elections. After nearly eight years of a political vacuum without an election, the country deserves better.

Violating media freedom is not acceptable. The MCOT board must allow the veteran journalist to return to a role where she benefits the country and its democracy.

If not, the board, as well as the regime it seeks to protect, must accept the inevitable backlash.

NOTE: The full debate that resulted in the sacking of Ms Orawan is available on YouTube.