Shortly after it was appointed by the new military regime in 2014, the National Legislative Assembly proposed a law that would criminalise torture and the government murders known as "enforced disappearances". Today, as it properly winds down to hand over to an elected legislature, the NLA is still considering the same bill. It is unlikely to pass before the election officially ends military-directed rule.

The refusal to ban abuses and murders that are illegal in most countries and by international law is a shameful blot. Both the regime and its appointed parliament share that shame. The NLA often repeats that it is proud to have enacted 419 new laws in the past four and a half years, and counting. Some were arbitrary, unneeded, unwanted and foisted on the country. A tiny few were urgent and necessary.

The pending and apparently dead Torture and Enforced Disappearance Prevention and Suppression Bill is one of the latter. It would put Thailand on the list of civilised nations that forbid mistreatment of anyone taken into state custody. Virtually all right-thinking people in civilised countries agree that ensuring and protecting the well-being of detainees, prisoners and even convicts is a primary responsibility of government and security forces.

For far too long, both the police and military have been ambivalent about this responsibility. To this day, security officers believe that the ends of getting a "confession" or other information justify the means. In this atmosphere, if it requires violence right up to the death of detainees in order to get the answers desired, that is acceptable.

This is the lie of the torturer. It is almost always possible to beat answers from detained persons. What is most uncommon is to determine truth. Torture victims learn early in their sessions of sadism what answers the torturers want. To stop the torture, they will provide those answers. That is why so many "confessions" obtained by police and military officers are thrown out of court. Judges know, as does the public, what happens to prisoners in so-called interrogation sessions. 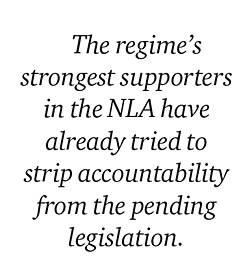 Thailand has never had a law against torture. It has never legislated against the detestable crime of disappearing -- murdering and hiding the bodies -- critics and activists who have not broken the law. The current regime under Prime Minister Prayut Chan-o-cha clearly doesn't want one. The reason is well known. Not only would torturers and "men in black" be brought to justice, so would their superiors.

The regime's strongest supporters in the NLA have already tried to strip accountability from the pending legislation. Section 32 would currently punish officers in "direct control" of torturers or killers. That would eliminate any action against the men or women at the top of the violence orders, the direct opposite of the public's support for this measure.

The NLA could bring some honour to its long and expensive term by passing the law against torture and enforced disappearance. Despite the hundreds of bills it has enacted, this one is probably going to define whether Gen Prayut's NLA is remembered kindly or condemned.