In less than two weeks, Thailand will hold a general election -- the first time in more than five years.

As with previous elections, the race has intensified as the election date has come closer. Political parties have been launching fresh strategies to attract voters and, at the same time, to block their rivals' bids in the the final stretch of the contest.

What we have recently seen in the last leg ahead of the March 24 election is a new look for Prime Minister Prayut Chan-o-cha, the prime ministerial candidate of the Palang Pracharath Party (PPRP), which appears to be his re-branding strategy to show a fresh image of himself.

Dressed casually in trendy clothing, Gen Prayut looks relaxed and friendly in a series of new photos which have been released on social media.

The photos seems to be an attempt to re-brand Gen Prayut. So, is the prime minister actually not the same person people have perceived him to be for almost five years?

I wonder who came up with this campaign strategy for Gen Prayut and why they think it will be effective.

It seems like Gen Prayut and his campaign team are trying to erase the image of the conservative, aggressive and short-tempered man from the memory of the people and replace it with a smart, fashionable and warm-hearted guy whom they have seen on social media for less than 15 days.

In the 4.0 era, why do they think that voters can be persuaded by the simple trick of changing one's look and clothing style?

Instead of introducing a new look in the two weeks leading up to the election, would it not have been better if Gen Prayut agreed to participate in the political debates? Such debates have helped reflect the attitudes, ideas and visions of those who have proposed themselves as the next prime ministers of the country. They are an effective way to show people the true colours of the prime ministerial candidates.

Gen Prayut has ignored this channel, seemingly believing that his new look will attract more interest and support from voters than his visions and ideas, which could have been reflected during the election debates if he had participated in them.

Unfortunately, this strategy has not boosted support for him, neither among the electorate nor key politicians. It also does not seem to have given him a better chance of returning as a prime minister for a second term.

On the contrary, Gen Prayut has become more isolated in recent days.

Abhisit Vejjajiva, the Democrat Party's leader, dropped a bombshell on Sunday when he said that his party would not support Gen Prayut in his bid to return as prime minister. That means that after the election, if the Democrats lead the formation of a coalition government, Mr Abhisit will be proposed as a prime minister.

With his party only expected to win the second highest number of MP seats, Gen Prayut needs to take Mr Abhisit's remarks seriously. Without the support of the Democrats, Gen Prayut's chances of returning to power look slim despite the fact that he would likely secure support from 250 senators whom he would handpick if he became premier.

Generally, a political party needs a majority, or more than 250 MPs seats out of 500, in order to form a government after the election. Due to the new election system, no party is expected to win a majority in this election. As a result, political parties will compete to form a coalition government.

For political observers, this election has been a race between pro- and anti-regime parties. The pro-Prayut camp has been led by the PPRP while the anti-military camp, many of whom are pro-Thaksin Shinawatra parties, has been led by Pheu Thai.

The Democrats had previously been expected to align themselves with the pro-Prayut side, but with Mr Abhisit's recent remarks, the Democrat Party has emerged as a third group to compete with these two arch-rivals.

Mr Abhisit said he was confident that the Democrats would win more than 100 MP seats. If that happens, the party will have a strong chance of leading a coalition of political parties to form a government.

He may not support Gen Prayut, but Mr Abhisit has not ruled out the possibility of teaming up with the PPRP to form a government if the latter can accept his condition of a no-Prayut prime ministerial nomination.

Still, Mr Abhisit only has a small chance of becoming premier again. Under the constitution, he needs more than 375 votes from the Lower and Upper Houses to win a prime ministerial vote. The 250 senators, of course, will not vote for Mr Abhisit but most likely for Gen Prayut. As a result, if the Democrats get 100 MP seats as expected, Mr Abhisit will still need more than 275 votes from other parties to make his dream come true. 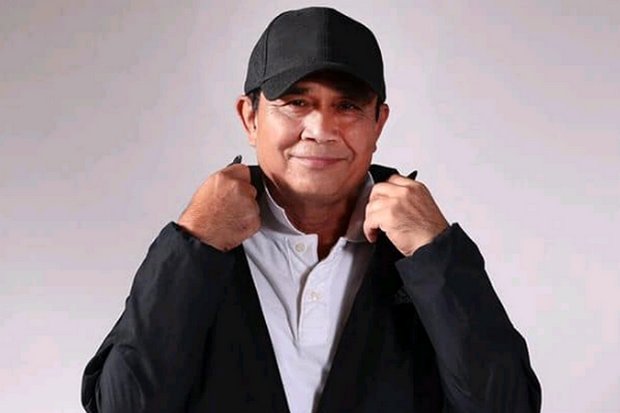 Particularly popular with internet trolls and satirists is this photo, described variously by commenters as the general's new hipster or gangsta look.

It will not be easy for Gen Prayut to win a prime ministerial vote without the support of the Democrats. He will need a total of 126 MP votes in addition to the 250 from the senators.

The PPRP, which nominated Gen Prayut, is expected to win more than 70 MPs, and will need help from medium-sized parties, especially Bhumjaithai and Chart Thai Pattana. Unfortunately for the PPRP though, Bhumjaithai leader Anutin Charnvirakul has said that a prime minister "must come from the will of MPs" who represent the Thai people, not from the votes of appointed senators.

This implies he will not support Gen Prayut.

In addition, it is believed that after the election, the senators will face public pressure not to act as a rubber stamp for the junta and be required to exercise their "free vote" for the premiership.

In the event the parliamentary voting process fails to get a prime minister from political parties' listed candidates, bringing in an "outsider" premier might be on the agenda.

While it is difficult to predict the result of the election, it is easy to see that the image re-branding of Gen Prayut will certainly not help him in his bid to return as prime minister.

The share price of Central Retail Corporation Plc ends in the red on the first day of trading Thailand's largest-ever IPO.