Fanning flames of hate speech will end in tears
Opinion

Fanning flames of hate speech will end in tears

In a press briefing that was staged to stress his intent to denounce hate speech, army chief Apirat Kongsompong on Tuesday actually fanned the flames of hatred against self-proclaimed "pro-democracy" political parties and their members. 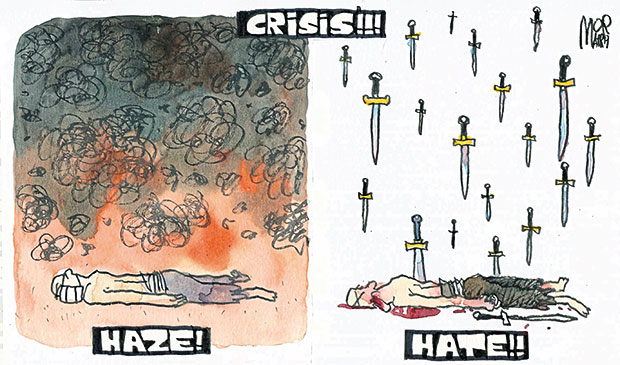 He rebuked the emerging political discourse of the self-proclaimed pro-democracy camp that pits democracy against dictatorship as an effort to divide the people following the general election. He went as far as warning them to not try to change the constitutional monarchy system, branding some of them as "extreme and pretentious" leftists.

In fact, many people -- including myself -- do not consider the democracy-versus-dictatorship rhetoric as a form of hate speech, but a factual narrative that illustrates the political preferences of both camps. It's like defining the Democrats and Republicans in the United States. It shows there is pluralism in democracy.

Far from being a message of peace and love, Gen Apirat's controversial remarks have instead exacerbated political crusades on social media against the two key leaders of the pro-democracy Future Forward Party (FFP) -- Thanathorn Juangroongruangkit and Piyabutr Saengkanokkul.

The FFP in particular, has become a target of hate speech because of its progressive policies, such as its pledges to reduce the role of the military in politics, revise the constitution, remove the 2014 coup-installed legal mechanisms, and do away with conscription.

Earlier, an architecture lecturer at a university posted a message on Facebook that branded the party's supporters as young people who disrespect the older generation. But the proof that he cited is merely a cornucopia of nonsensical comments he gathered from Facebook. Unfortunately, his statement was taken up by a major media outlet, which treated it as if it were factual news, when it was in fact, pure hate speech.

Before the election, there had been a series of efforts to try and paint an image of Mr Thanathorn and Mr Piyabutr as a threat to the country's high institution by using some parts of their statements made many years ago.

In the past week, the attacks against Mr Piyabutr have become more intense. There have been several video clips and pictures shared on social media, which can only be considered at best, as half-true, about a lecture he gave back in 2013 when he was a lecturer at Thammasat University on the legal principles of democracy to explain why monarchs in general should be "above politics".

However, those videos were doctored to frame the messages in such a way that made it seem as if he was specifically talking about the Thai monarchy, which he said is "misleading". The clips were also edited to make them look as if the lectures took place recently.

In Tuesday's press briefing, Gen Apirat lashed out at those who studied abroad -- warning them to not try to adopt Western leftist ideologies in order to change Thailand's democratic system. Even without naming any names, it is generally understood he was mainly referring to Mr Piyubutr, who obtained his master's and doctorate degrees in France.

Gen Apirat also re-emphasised a message delivered a day before by Prime Minister Prayut Chan-o-cha, who said publicly that a group of people are trying to plant the wrong idea in the minds of the public with the intention of causing chaos and threatening the country's core pillars, including the high institution. He also warned people to be cautious of what they read on the internet.

What the public should have been told instead, is to take his and Gen Apirat's highly charged political messages with a grain of salt.

Immediately after Gen Apirat's speech, an online petition was launched to prevent Mr Piyabutr from taking up an MP post, as he was accused of being an "imminent threat" to the institution. The campaign, which had garnered more than 10,000 signatures as of yesterday, may not have much impact on his post in parliament -- but it risks spreading the flames of hatred to even more people.

The two senior military leaders should have tried to curb the spread of hate speech instead of exacerbating it. They should have learned from history. In the lead up to the student massacre in October 1976, hate speech in the form of state propaganda was also used to instigate hatred against student and political activists. Similar tactics were employed against ousted premier Thaksin Shinawatra, which subsequently became the core of the conflict in Thailand's political scene that has spanned over a decade.

With their ongoing crusade against the FFP leaders, it is becoming obvious that we cannot rely on the two leaders to be the ones to put an end to hate speech, because they have been committing it themselves.