A boy catches fish during high tide on Ghoramara Island, India, Sept 8, 2018. Ghoramara Island, part of the Sundarbans delta on the Bay of Bengal, has nearly halved in size over the past two decades, according to village elders. (Reuters file photo)

Doubtless it sounds crazy to anyone who has watched a sandcastle crumble as the tide washes in but the key to stopping the world's densely populated deltas from sinking beneath the waves is sand. Or rather sediment: the combination of gravel, sand, silt and clay that large rivers carry down to the sea and deposit on deltas. Sediment that constantly and naturally replenishes deltas, keeping them -- and all the people, fields, industries, cities and wildlife that rely on them -- above the water.

While scientifically proven, this surprising fact has struggled to gain much traction outside the small world of geomorphologists -- like me. Instead, communities, cities and countries have continued to put their faith in concrete solutions to try and stop floods, saltwater intrusions and erosion, and reduce the impact of extreme weather events. But these efforts always end up being little more than short term solutions because they are a response to the symptoms, not a cure for the root causes of the crises facing deltas across the world.

So it is extremely significant that the recent authoritative IPCC Special Report on Oceans and Cryosphere in a Changing Climate specifically refers to the important role river sediment plays in replenishing deltas and counteracting land subsidence. And stabilising deltas is becoming ever more urgent. The report predicts that hundreds of millions of people in low lying areas could be at risk from climate change, while acknowledging that the ground is already sinking beneath the streets and skyscrapers of many of the mega-cities sprawling across Asian deltas -- including Bangkok, Ho Chi Minh City and Shanghai. 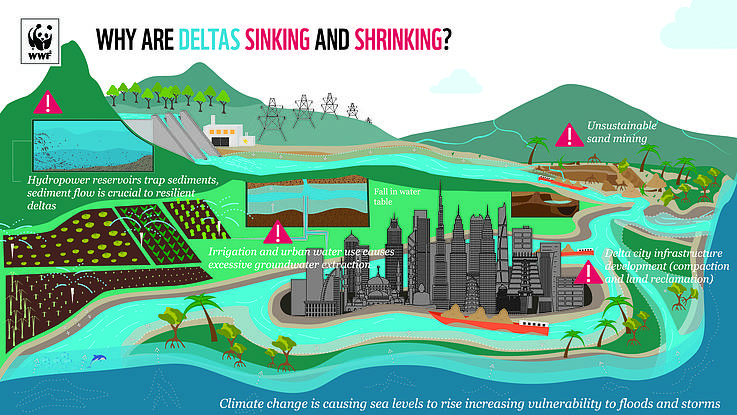 And we know why. The amount of sediment flowing along most major rivers has been drastically reduced over recent decades, trapped behind an ever-increasing number of hydropower dams and extracted by accelerating demand for sand and gravel for construction and land reclamation. As with CO2 emissions, there is a lengthy time-lag between changes in sediment supply and the impact on deltas. And also, like CO2 emissions, we might have already unknowingly passed some dangerous thresholds.

So what to do? That's what over 100 experts from around the world grappled with in Bangkok last week at a Regional Forum on Building Resilient Asian Deltas. One answer is already crystal clear. We need to take urgent steps to avoid any further reduction in sediment loads: critically, this means opting for solar and wind projects rather than new hydropower dams on free-flowing rivers and ensuring that sand mining is regulated and sustainable.

But surprisingly, the report does not take the obvious next step: recommending that efforts are made to ensure the natural processes of transport and deposition of sediment that underpin the stability of Asia's deltas -- and the societies, economies and ecosystems that depend on them -- are protected or restored. Instead, the report falls back on responses that do not measure up to the challenge: more hard infrastructure, moving people away from rapidly eroding shorelines, and expansion of mangrove forests to provide natural protection against storms and sea level rise. 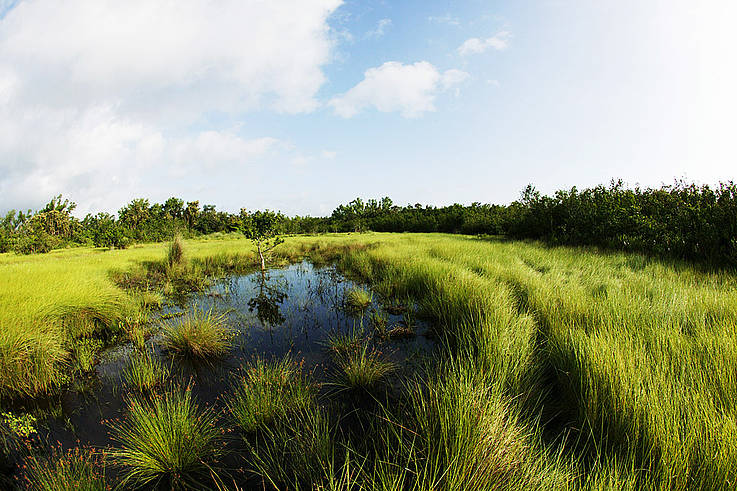 All these have a part to play because the complex crisis facing our deltas requires a concerted, multi-faceted approach. But they are just part of the solution. And they are doomed to failure unless they are supported by sediment flow in rivers. Let's take just one example: planting mangroves to act as buffers and help coastal areas adapt to climate change. There is no doubt that they improve resilience: the issue is for how long because mangroves have an Achilles Heal. Guess what? Sediment.

Without enough new sediment, mangroves in deltas and estuaries (representing over 60% of all mangroves on earth) cannot thrive, let alone successfully contribute to coastal protection. The extent to which mangroves can be conserved or replanted fundamentally depends on sediment supply. Many mangrove rehabilitation or restoration projects -- often implemented at a considerable cost -- unfortunately overlook this fundamental criterion and will therefore fail to achieve their long-term goals.

It is now clear that Asian deltas are going to be hit very soon by the worsening impacts of climate change, and very hard. Existing adaptation plans and levels of investment fall far short of what is necessary. We need a transformative, new approach to address these complex challenges at scale: the Resilient Asian Deltas initiative. 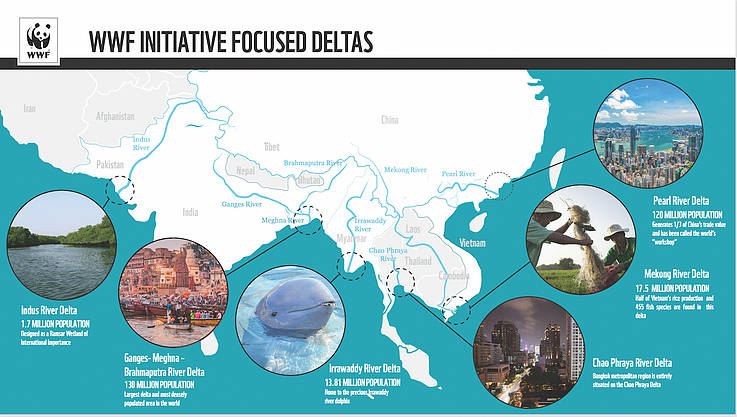 Driven by WWF and the Dutch government and with support from World Economic Forum, this initiative aims to increase the ability of Asia's deltas to withstand these multiple threats and so help stop the deltas of the Chao Phraya, Indus, Ganges, Irrawaddy, Mekong, Pearl and Yangtze from sinking and shrinking.

The initiative will focus on the root causes, building political will and financial support for nature-based initiatives to address systemic threats in the deltas and also, critically, upstream. It will take us back to the rivers -- ensuring that we start valuing them for more than just the water that flows along them but also for the sediment they carry: recognising that keeping them healthy, free-flowing and full of sediment is a priceless adaptation strategy.

Because back at the beach, what do you do when the sea starts lapping at the edges of your sandcastle. You dig a trench to divert the water. Then build a wall to block it. All to no avail. The only way to keep your precious mound of sand above the seas is to keep bringing sand from further up the beach. Just like healthy rivers do…