Health personnel from Prince of Songkla Hospital send off colleagues who are to be dispatched at a field hospital in Phuket this week.

While the battle against the coronavirus outbreak is both drawn-out and multi-faceted, experts can draw on the intersection of mathematics and biology to arrive at specific simulations and projections.

As someone who worked on computational engineering for over four decades, I used a simple mathematical ratio of cumulative Covid-19 infections between two points seven day apart, referred to as the Seventh-Day Amplification Factor (A7). A three-day rolling average was used at both ends to eliminate daily fluctuations. This A7 can be used to monitor current trends, the effectiveness of the state intervention and to forecast the end of the outbreak. It is shown to be qualitatively related to those asymptomatic infected persons mingling in society, known as "silent patients". In the absence of mass testing such as in Thailand, it is critical to gauge the existence of these silent patients, and to inform the public that social distancing is still necessary.

A lot of good news has been coming out of both Thailand and the US, while India needs to persist with social distancing. Japan and Singapore, meanwhile, may actually be witnessing a reversal.

Theoretically, if the authorities can test all citizens and quarantine the infected ones, there will be no new infections. The second-best intervention would be to identify the epicentre of the outbreak and have it shut down swiftly, similar to what was done in China and South Korea. But this has to be implemented at the earliest stages of the outbreak. 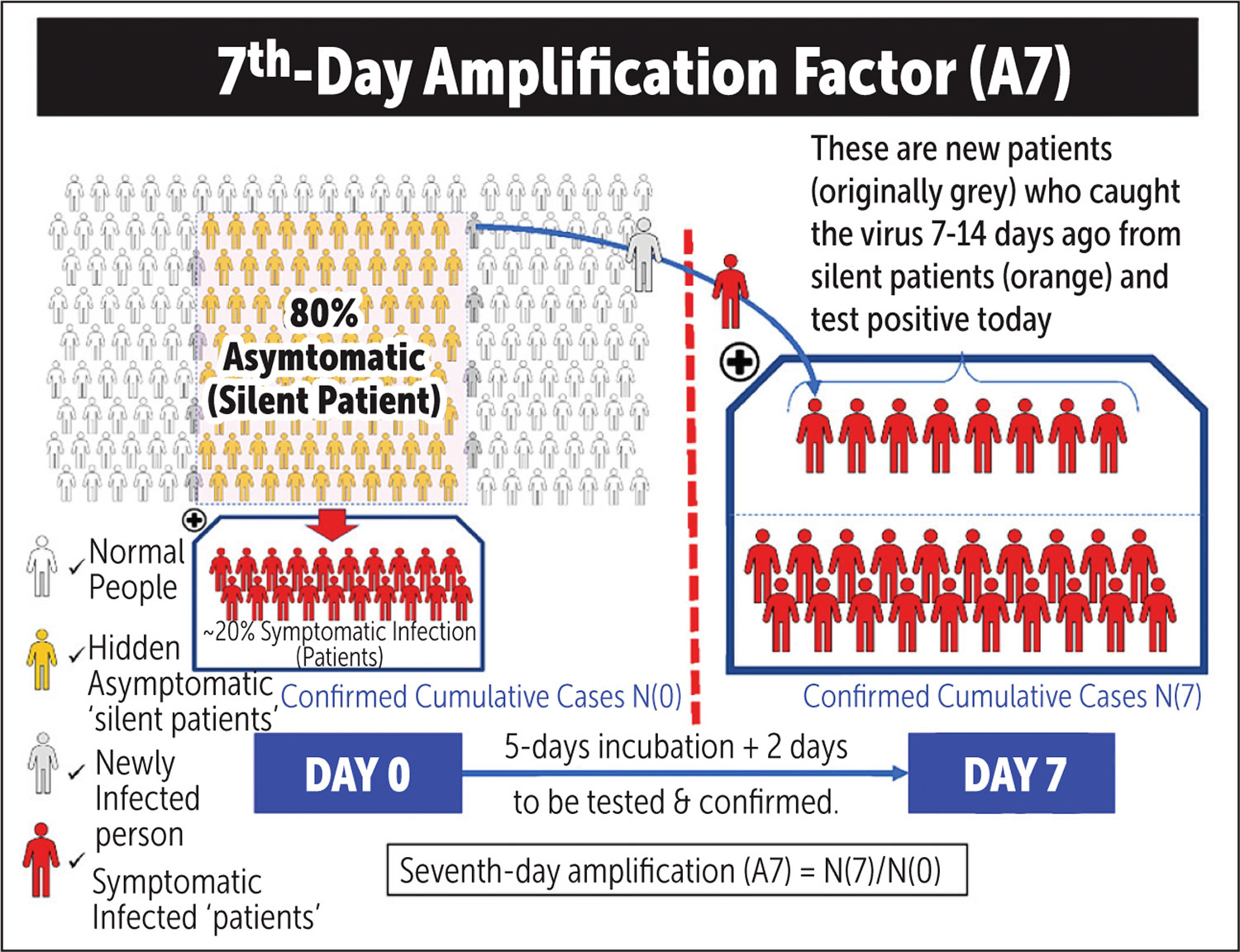 In Thailand, the first case was reported on Jan 13, which implies that neither the first nor the second options were available. Thus, the only measure that could mitigate the spread of the virus was "social distancing," and the best available option for implementing social distancing is to stay at home. By everyone adhering to social distancing, the "silent patients" can be automatically separated from the innocent individuals and prevented from unknowingly transmitting the disease.

But government intervention is required in order to enforce country-wide social distancing. Thailand's first major such intervention occurred on March 18, when the government announced significant restrictions on educational institutions, marketplaces and international travel, among others.

But what exactly are the implications of Seventh-Day Amplification?

The answer is relatively simple.

In Figure 1, new patients who test positive today must have caught the virus at least seven days ago (given five days of incubation and two days for testing). These Day-7 (new) patients were therefore infected by Day-0 silent carriers and not by Day-0 patients since they were already quarantined.

These "silent patients" represent roughly 80% of all infected cases, or about four times the number of Day-0 patients. Many of these "silent patients" may have already recovered, and thus only active ones can transmit the virus. If we monitor the ratio of total infected cases today over that of seven days ago, we arrive at the number of new patients confirmed over the last week compared to Day 0. We call this ratio "the 7th-day Amplification Factor," or A7.

A value greater than 1.0 indicates that many transmissions are still occurring, and this implies that many "silent patients" were still out and about seven days ago. By contrast, a perfect A7 = 1.0 ratio implies no transmission over the week, and therefore no more active "silent patients" in society. A long string of values of 1.0 are still necessary to ensure a steady state before declaring a final victory (as in the case of China). 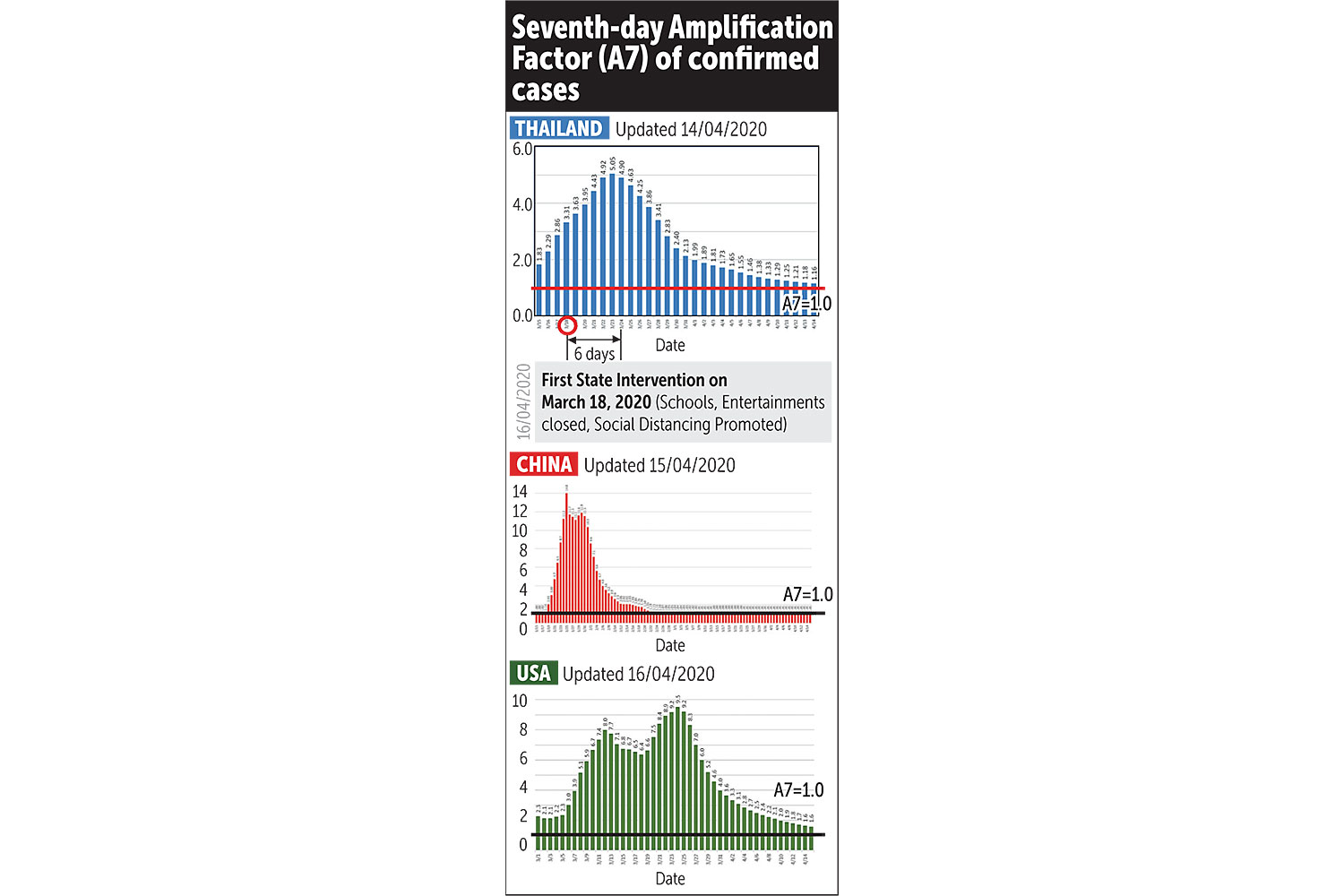 The best use of an A7 chart is to confirm the effectiveness of measures taken as well as to estimate the end of the outbreak. For example (Figure 2), in Thailand, the rapid decline of A7 after March 24 confirms the effectiveness of the March 18 decision to close educational institutions, shopping centres and places of entertainment.

Additionally, based on the present trend, we can roughly predict that A7 will hit 1.0 around April 30 unless we witness an unfortunate episode of a super-spreader.

In China, the A7 value dropped to nearly 1.0 very quickly thanks to stringent measures being imposed at the onset of the outbreak. In China, although the A7 value did cross 10, following the strict lockdown of Wuhan and Hubei province, the A7 value declined sharply, eventually falling to 1.01 on March 4. Wuhan would later reopen on April 8.

If current measures are not effective, the graph will display a rebound, as in the cases of Japan and Singapore, both of which are moving toward imposing more stringent measures.

The case of the US is very interesting. The total number of confirmed infections is the world's highest (560,433), partly because of its mishandling of the problem in the earlier stages.

Despite the high numbers of cases and deaths, however, the news for the US is good since the A7 value seems to have slowed over the preceding two weeks, falling to 2.0 on April 10.

Another question that is often asked has to do with the disparity in Covid-19 testing in different countries.

For example, Thailand reported on April 9 a total of 30,542 tests compared with 494,711 in South Korea, or 0.44 tests per thousand compared to 9.66 in South Korea. As a result of this vast disparity, Thailand therefore needs to deploy a different strategy than South Korea.

We can easily understand that a country with lower levels of testing will likely have more "silent patients" hidden in society.

Prof Worsak Kanok-Nukulchai, a Fellow of the Academy of Science, Royal Society of Thailand, is Executive Director of the Chulalongkorn School of Integrated Innovation.