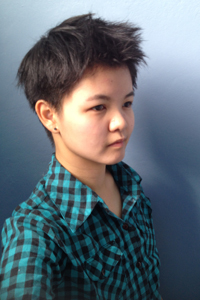 If a student's hair could talk, every single strand would probably ask: "Why are you so obsessed with me?" in its best Regina George impression.

But to whom is this question directed to? The system, the educators, the institutions, and definitely, the Ministry of Education itself, which announced back in May that both male and female students can keep reasonably long hair but without fancy stylings like curling or colouring. This is actually written in the Royal Gazette.

However, many have turned a blind eye to this announcement. For the past few months, news has periodically popped up that teachers have been violating the order and are still punishing students for their "wrong" hairstyle. One of the most recent cases took place in Si Sa Ket province where a mother complained on social media about her daughter's hair being forcibly cut in public by a teacher. From the pictures, her hair was originally chin-length. Yet, a portion of it was (badly) reduced to earlobe-length under the teacher's scissors. This infamous earlobe style has long been enforced as the correct and ideal female student hairstyle at many Thai schools for decades. For boys, the ideal is a super-short style that borderlines a military cut.

Last week, the news reported that the mother in question had decided to let her daughter quit that school. Following her post on social media, the mother has been bombarded with insults and hate speech with many people criticising her for humiliating the school, the province, as well as asking why her daughter wasn't following the school's rule (completely ignoring the fact that it contradicts the Royal Gazette) in the first place. Due to the family's concern and fear that the daughter could be bullied, they decided it was best to just leave.

This, of course, has put the Ministry of Education in a difficult position. Earlier this month, young activists from the Bad Student group also visited the ministry's office to ask for clarity about the rule, citing that these cases of punishment have violated the rights of students and negatively affected their psychological well-being.

As a result, the ministry has announced that it will send a memo to schools across the country for them to adhere to the rules announced in May as well as to refrain from physically punishing students (that means no hitting or cutting their hair). While it's better than nothing, it's also too little, too late. The damage caused to this girl, her family and countless other students has already been done. Schools are no longer a place for wisdom and knowledge but rather of humiliation and fear.

Unfortunately, not everyone supports the new hair rule as they are satisfied with this system of oppression. On social media, comments (you guessed it -- from adults) are asking why the mother is taking her daughter's side and why the teacher should apologise, saying it badly affects the authority of teachers and the school. Others feel children can now do no wrong and that they are too sensitive over little things. As their reasoning goes, if students can't follow this simple rule, how are they going to go out and face other challenges in the world? It should be noted that these reasons are similar to the flawed logic people often give to hazing and Sotus, which has a proven track record of oppression, abuse of power and seniority.

What's the correlation between the style of our hair and our performance in education anyway? Age-old logics have said we must keep to this very same thing and look and wear the same in order to be equal. We're supposed to eliminate distractions, like fancy hair and clothes and just focus on the study. That's how you can be a good student in this country. Bow down, follow instructions and don't ask to be yourself. Freedom of expression and rights over your own body and hairstyle? That's out of the question.

Thai schools are obsessed with order and discipline whether it's the hairstyle, uniforms, bows, socks, shoes, and more. Everything has to be in order and no one should dare to stray from it if they don't want to be punished. And, my, is it difficult to thrive in a system that is reluctant to allow people to think for themselves? I still remember having my hair and even my nails checked by teachers roughly 20 years ago. And if anyone of us were to break the hair rule, we'd get hit by a stick on the palm of our hand. Some must have gotten their hair forcibly cut, too, but that memory is pretty hazy. What difference has two decades made? Apparently, not much. And it will never change if we don't do anything about it.

Melalin Mahavongtrakul is a feature writer for the Life section of the Bangkok Post.

Feature writer of the Life section

Melalin Mahavongtrakul is a feature writer of the Life section of the Bangkok Post.