The frustration against the status quo can be expressed in several ways. If you're a hip-hop artist, you can rap and rhyme about it in a viral music video. If you no longer give a damn, you can put a certain uncle on blast in your Facebook post and mention his official page (you know who you are). Even if you're just a bystander, you can't dodge political illustrations and memes on your newsfeed.

But perhaps, one form of expression that hasn't been talked about enough is political art toys. My Facebook vortex has led me to Thai artists and toy designers who have taken a funny jab at the state of things through their amusing creations. Here are a few toys that aren't toying around with their political expression, as well as my analysis of the idea behind their designs.

GH Art Toy Studio (bit.ly/372Zudq) kills two birds with one stone, making two references in one doll whose face looks very familiar. The Thai toy studio, which specialises in hand-carved sculptures, marked the seventh anniversary of PM Prayut Chan-o-cha being in power by releasing a bust whose body resembles Nanno from Netflix's Girl From Nowhere but with the PM's face. The sculpture is named Naan-no, an obvious play on the character's name, and translated into English as "so long (time)". 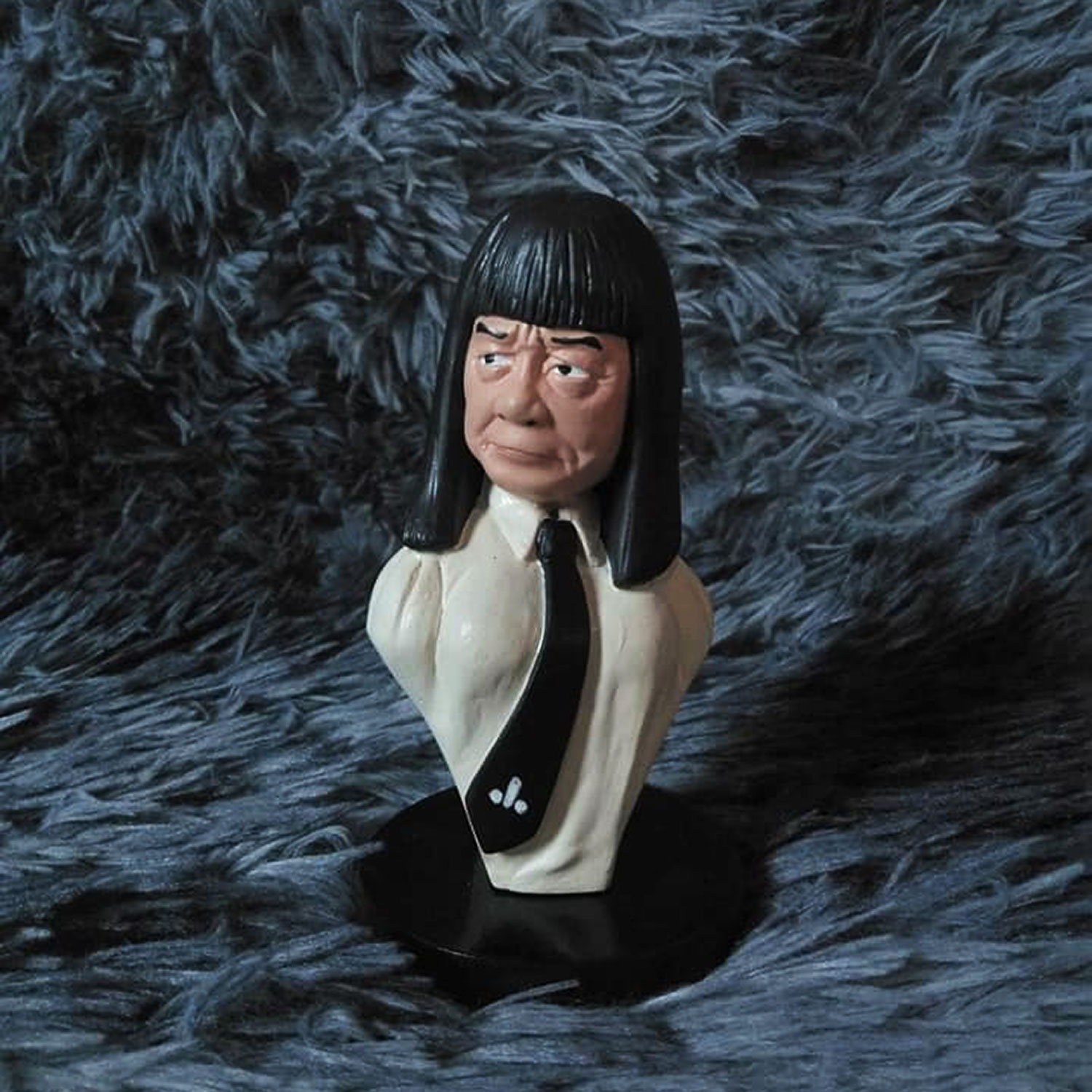 How does a fictional character link to our premier? Nanno brings chaos to every school she attends, according to the Girl From Nowhere's synopsis. 'Nuff said. Look closer. Is Naan-no flipping the bird or making a three-finger salute with a logo on her tie? The studio previously introduced another sculpture that took inspiration from Japanese anime Attack On Titan but it's too hot to be published here. Guru may go up in flames.

Funny Model Club (fb.com/funnymodelclub) went viral when they first introduced an "unclised" (uncle and -ise suffix) version of Pinocchio and Jiminy Cricket last June. Their design pays an obvious homage to Disney's 1940 animated film. Although the toy designer tries to be vague by dubbing the pair "Angry Wood Doll & Sleeping Cricket", we all know which two famous uncles are being made fun of. The added irony, which I can't tell is intentional or not, is that the cricket is the deuteragonist, who guides the boy to stay on the right path. But in the toy's version, the cricket appears to be sleepy. 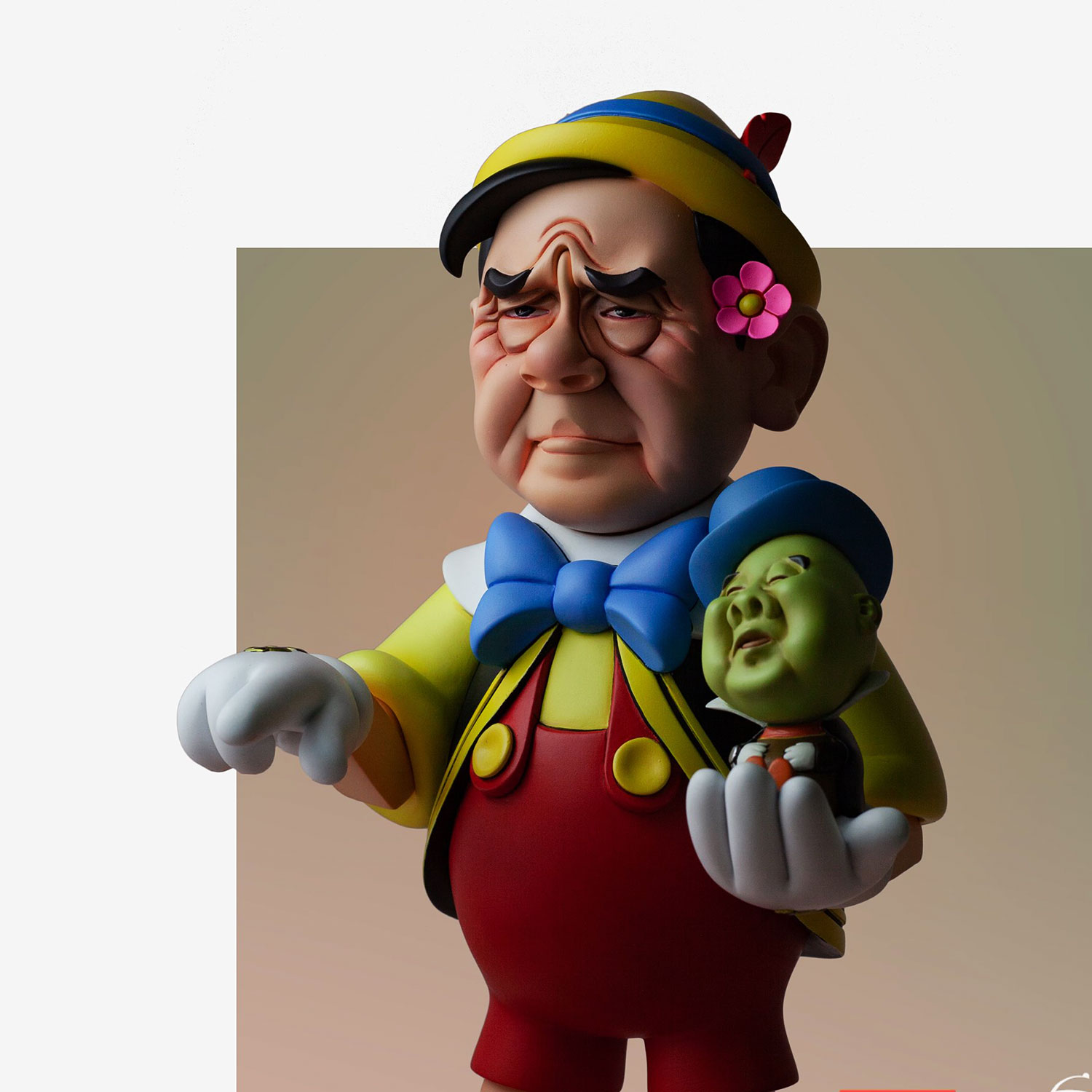 Fat Lane Toys (fb.com/FatlaneToys) unveiled a Thai parody of The Flintstones besties, Fred and Barney, in late March. The Stone Age -- and I use the word strictly as a modifier with no other connotation here -- uncles are made of resin and named The Lovely Uncle. Thai Fred is shown to be licking his lips after eating a big meat drumstick until only the white bone in the shape of Thailand's map is left. Make of that what you will. Thai Barney is holding an hourglass with the word 'Whose?' on it and sleeps standing up. Again, make of that what you will. 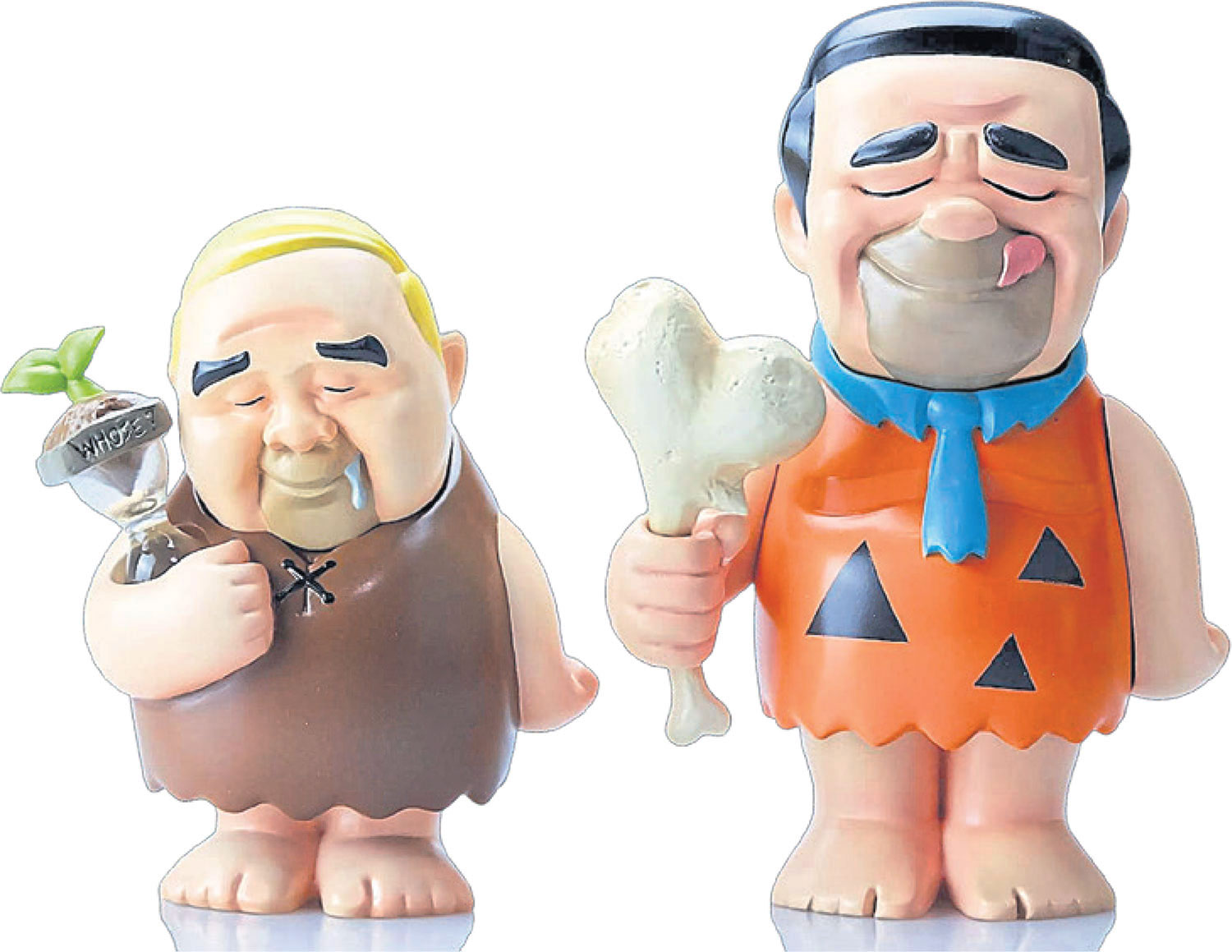 Woodcraving by Mod X (bit.ly/372Vd9T) comments on the untimely plan to buy submarines while the country is facing a big crisis in the form of a spirit holding a submarine. It's obvious that he takes inspiration for this wood-carved doll from the Faceless ghost of Spirited Away. The fact that the gold watch on him reminds you of a certain uncle is purely coincidental, I'm sure. 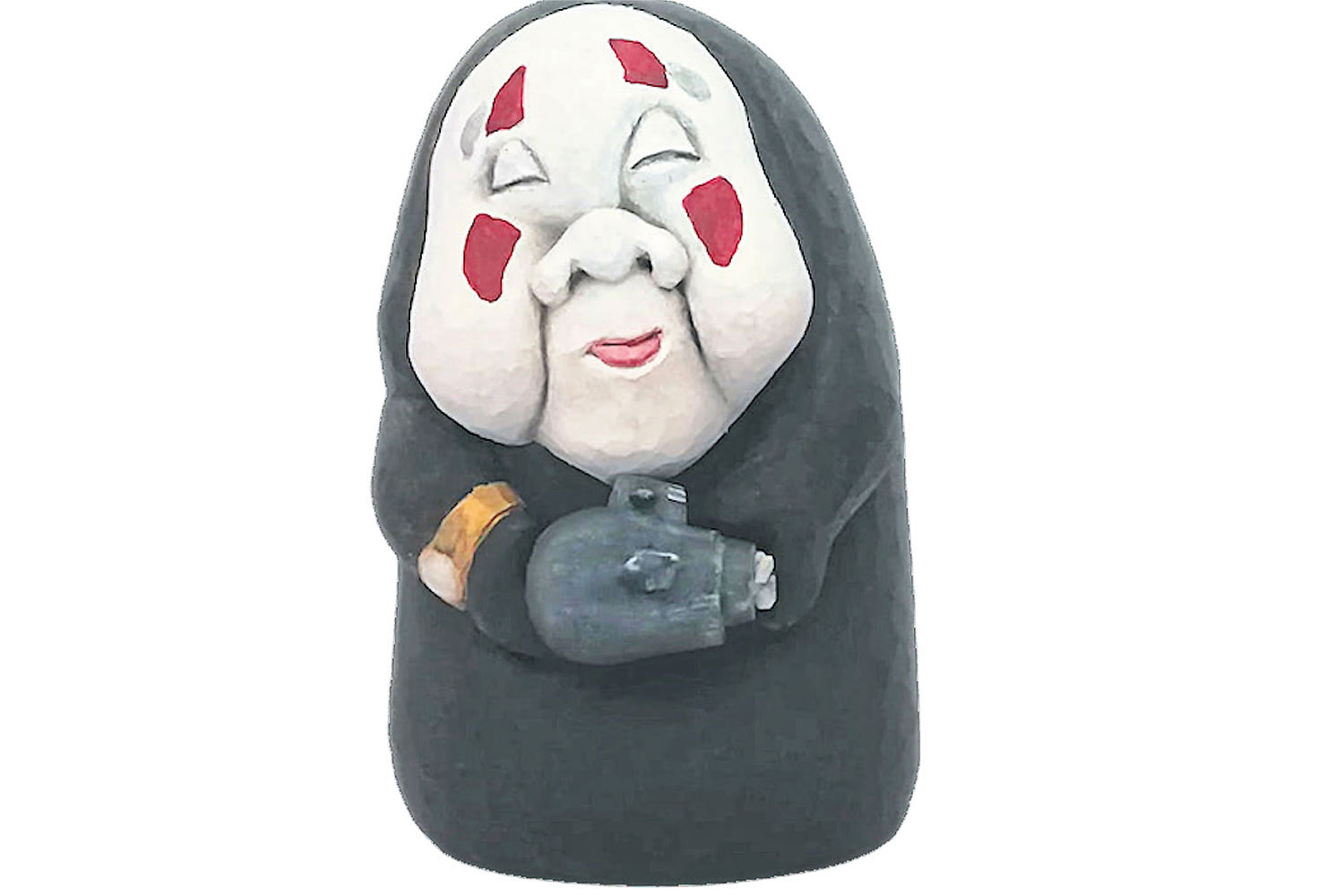 Chanathip Chuenbumroong (fb.com/chanathip.chuenbumroong) unveiled a wood-carved sculpture titled Game Changer in June. He took inspiration from Banksy's painting of the same name. The original painting, which the elusive artist donated to the Southampton General Hospital last year, shows a boy playing with a nurse doll, who wears a superhero cape. Chanathip gave a tangible form to the doll in the painting to remind us all who are the real heroes right now. Oh, the feels. 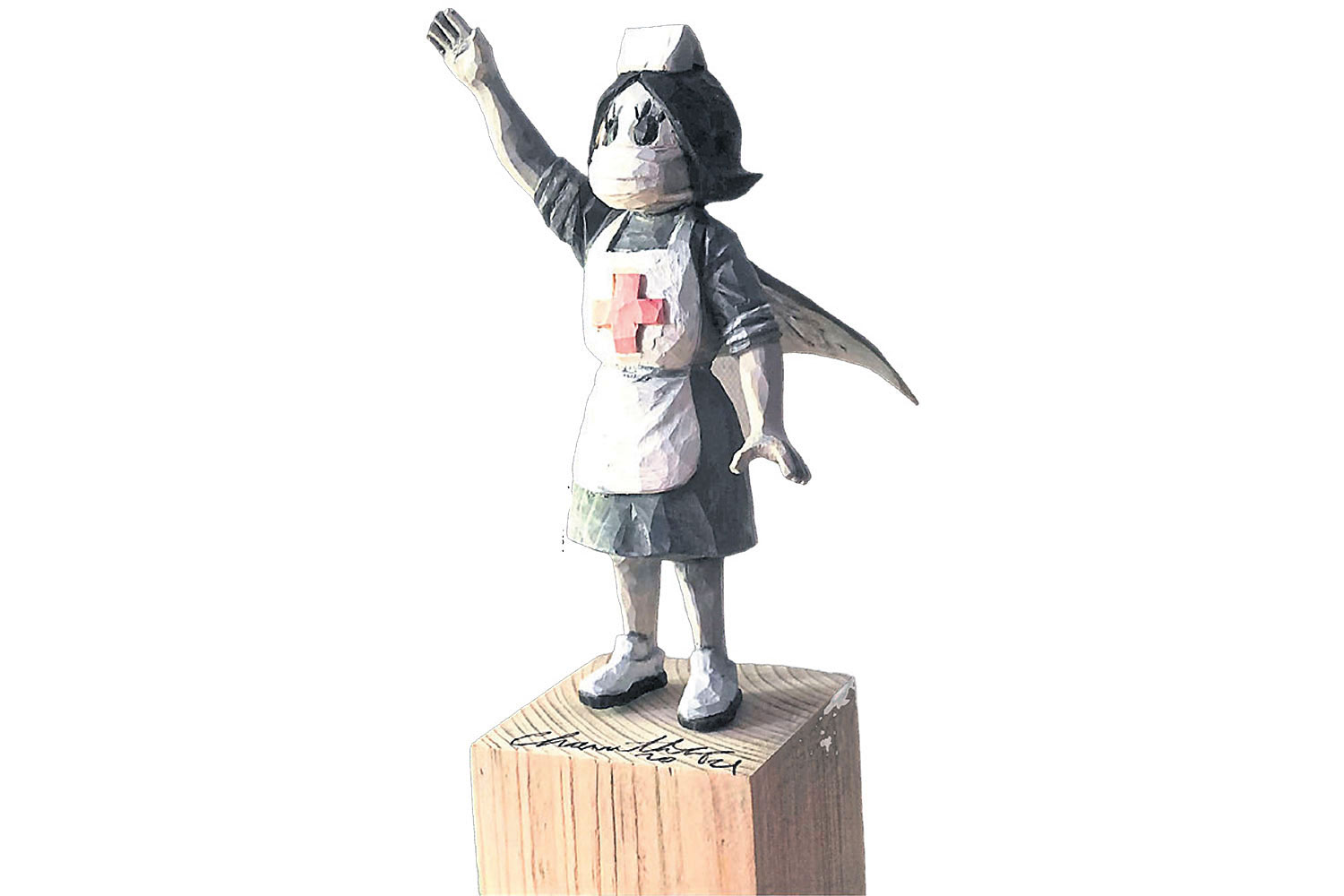