A file photo from March 2019 shows Prime Minister Gen Prayut Chan-o-cha in his heydey. As head of the junta government, he is shown here campaigning before a supportive crowd for the national elections. afp

That is not surprising despite a rumour that made the rounds among reporters in parliament that some dissident MPs of the Palang Pracharath Party, led by Deputy Agriculture Minister Thammanat Prompow, may try to unseat him.

The rumour proved to be hot air like the one that led Pheu Thai MP Visarn Techathirawat to cry wolf during the debate in parliament on Friday that a group of MPs were huddled in a meeting with the prime minister on the third floor of parliament to receive a cash handout of 5 million baht each, in exchange for their votes of confidence on Saturday.

The bags which were seen being carried on trolleys by the prime minister's aides turned out to contain documents, not cash.

A Move Forward MP, Nattha Boonchai-insawat, appeared to be duped as well when a picture he displayed during the debate, purportedly showing a group of army officers receiving allowances for special services in information operations (IO), an unpopular policy itself, turned out to be outdated and quite possibly fake.

Both MPs, as a result, are expected to face legal action.

If the prime minister was disappointed, he didn't show it. But he was left badly bruised as opposition MPs, one after the other, kept hammering him for his utter failure in his handling of the Covid-19 pandemic.

They also reminded him he was responsible for the deaths of more than 10,000 people from the Covid disease. 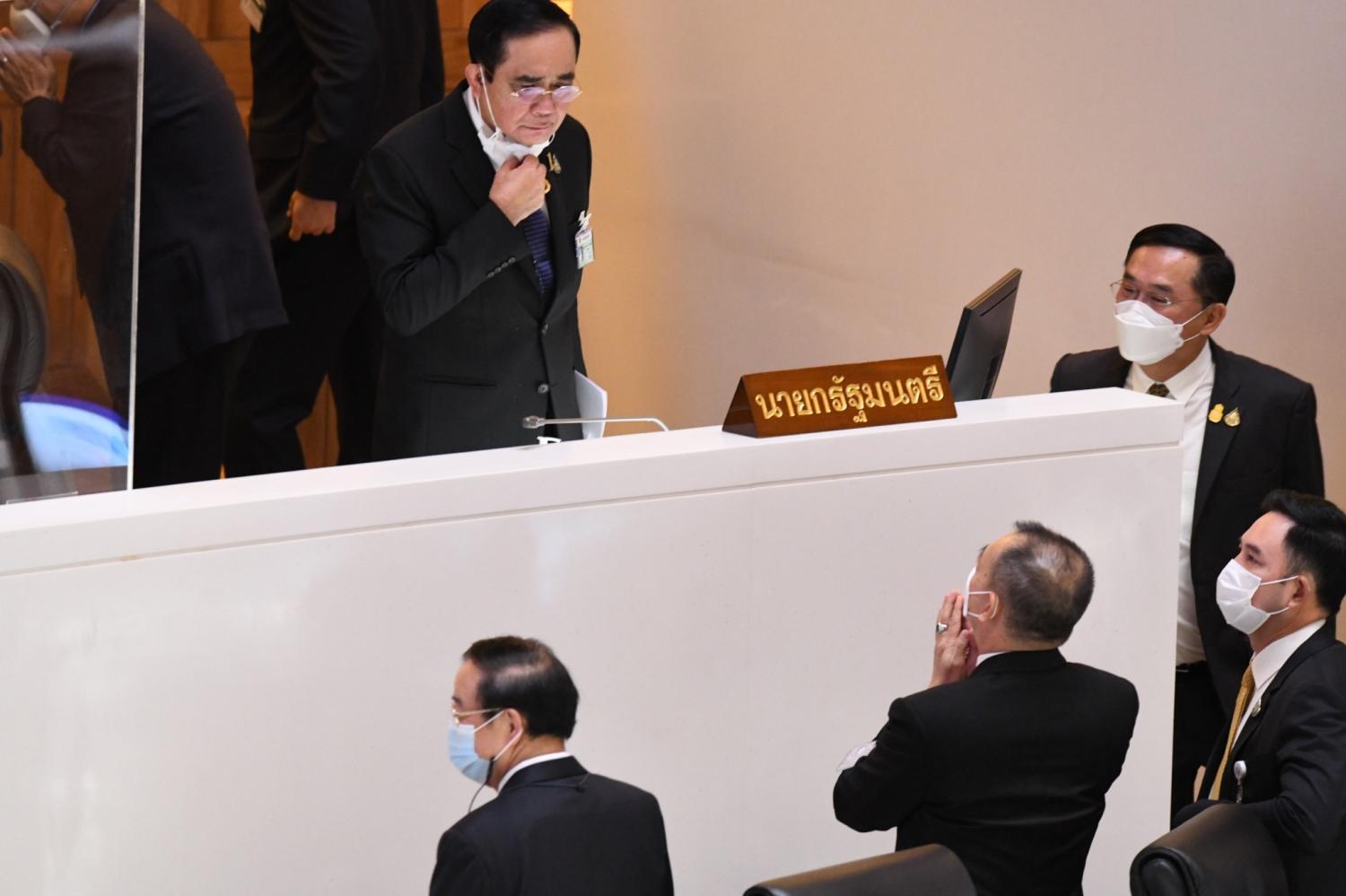 Prime Minister Prayut Chan-o-cha chatting with MPs on Saturday after the censure debate. courtesy of parliament

The prime minister was repeatedly accused of "trading in death" by opposition MPs to the extent that he rose up to defend himself that the allegation was very unfair.

Unfortunately, not many came to his rescue as he bore the brunt of the opposition's attacks for the simple fact that he is the sole person in charge of handling all aspects of the fight against the virus. He might have felt lonely even among government MPs. But then, who was to blame if not himself.

A non-elected representative, Prime Minister Prayut might have wanted to follow in the footsteps of the late Gen Prem Tinsulanonda, who was given the premiership on a plate and as such could distance himself from the government MPs as he considered himself a non-politician.

But alas for his own chances of political survival, Prime Minister Prayut does not have the charisma of Gen Prem.

This time around, he survives the censure debate. But next time he may not be lucky as he is being seen as a liability for his repeated bungling in the government's handling of the pandemic, from the procurement of vaccines and rapid antigen test kits, to shortages of vaccines to wrong decisions and misjudgment of the situation in general.

Although many regard him as unfit to lead the country under the present circumstances, the opposition itself is too fractured and weak to force his departure. Nor are the various protest groups which are leaderless and do not have the support of the workers, especially in Bangkok, able to accomplish much.

The street protests launched by young protesters prone to violence, like those who gather at the Din Daeng intersection and clash with the police, have alienated many in the capital who prefer peaceful protests.

The huge protest at the Pathumwan intersection in October last year is a thing of the past as recent protests have drawn smaller crowds to the extent that one protest leader, Sombat Boonngarm-anong, has resorted to a new approach, so-called car mob protests.

Protesters can now come together in cars and motorcycles, which occupy more space, giving the false impression of a big protest.

These groups must rethink their approach and aim to win the support of workers in Bangkok if their protests are to pack the punch of the past and unsettle the government. Violent protests will simply drive people away.

For the time being, we may have to put up with Prime Minister Prayut although many despise him and want him to go.

The prime minister will try to hang on if he can, but for many, his political future is now over. He was undone by his own errors in managing the Covid virus, even if he can't see it or won't acknowledge it. Whether his government can rise above the mess to perform well at the next election as his MPs must hope is still an open question.