Have you been back to the cinema as yet? As I'm browsing through movies for my first flick to celebrate multiplexes reopening (I went with Shang-Chi because duh!), I can't help but notice the difference between Thai posters of Hollywood movies today compared to those from bygone years. While Thai posters of blockbusters today stay faithful by transliterating its English title with Thai letters and translating its subtitle almost verbatim (eg Shang-Chi With Mysterious Legends of Ten Rings), the vintage counterparts are more-is-more and over explained. Not only do they feature different designs that are re-created by talented Thai artists along with Thai titles that have nothing to do with the original titles but also spew several visual spoilers. Here are a few Thai posters of Hollywood movies with crazy titles and taglines for your entertainment.

P.S. As I discuss these posters, key plot moments will be brought up so spoiler alert.

P.P.S. Most of them happen to be horror movies so this article may double as a to-watch list for Halloween. 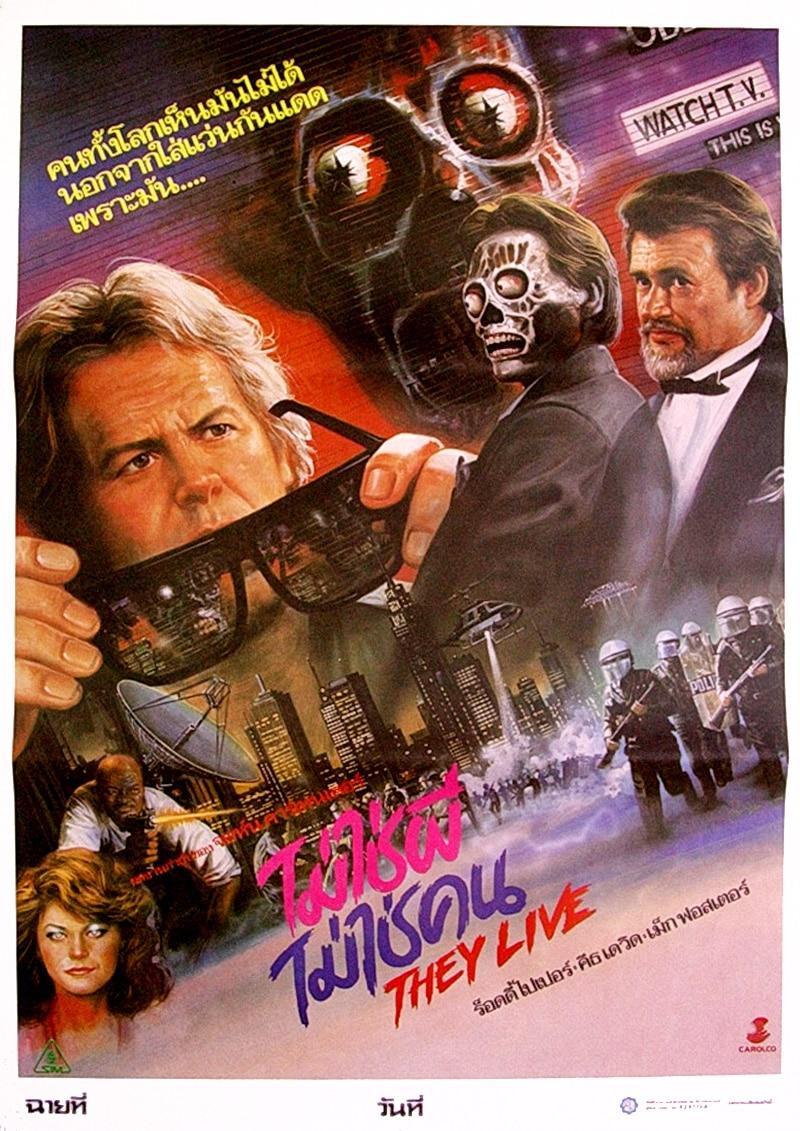 John Carpenter's cult movie They Live is Neither Ghosts Nor Humans in Thai. The tagline reads, "No one on the Earth can see them unless they wear these sunglasses because they are...". The Thai poster gives away outright the main plot of humans being subliminally controlled by aliens, who look kinda like flayed humans, and the only device to detect who's one of us (or them) is these special sunglasses. The original poster only hints at the significance of these sunglasses but the Thai poster screams that at you.

Another cult classic from Carpenter is 1982's The Thing. In Thai, it is The Thing That Devours The World and features the tagline: "If it's with a human, it becomes the human. If it's with an animal, it becomes the animal. It kills everything nearby." The tagline simply explains the modus operandi of a mysterious extraterrestrial being that assimilates any living being that it comes into contact in a horrendous way. The Thing's goal seems to be taking over the world by being the only thing. 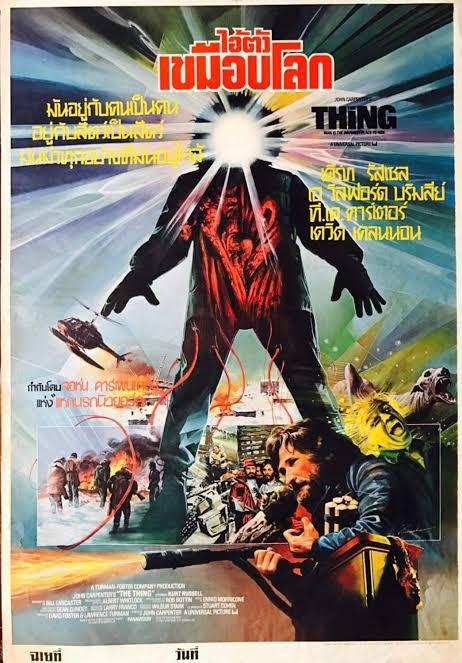 Stuart Gordon's Re-animator goes not-so-subtly by A Man Who Changes Another Man's Head in Thai and if you look closely, you'll notice that the word khon at the end of the Thai title is turned upside down. The tagline reads, "This man has two heads. One on his shoulders since birth. The other on the table!". It isn't far from the original one which goes, "Herbert West has a good head on his shoulders... and another one on his desk." However, if you look up the original poster, you'll see how the Thai version goes extra gory, clearly showing the head-in-the-tray moment, a bottle of glow-in-the-dark reagent and more bloody moments on the left corner. 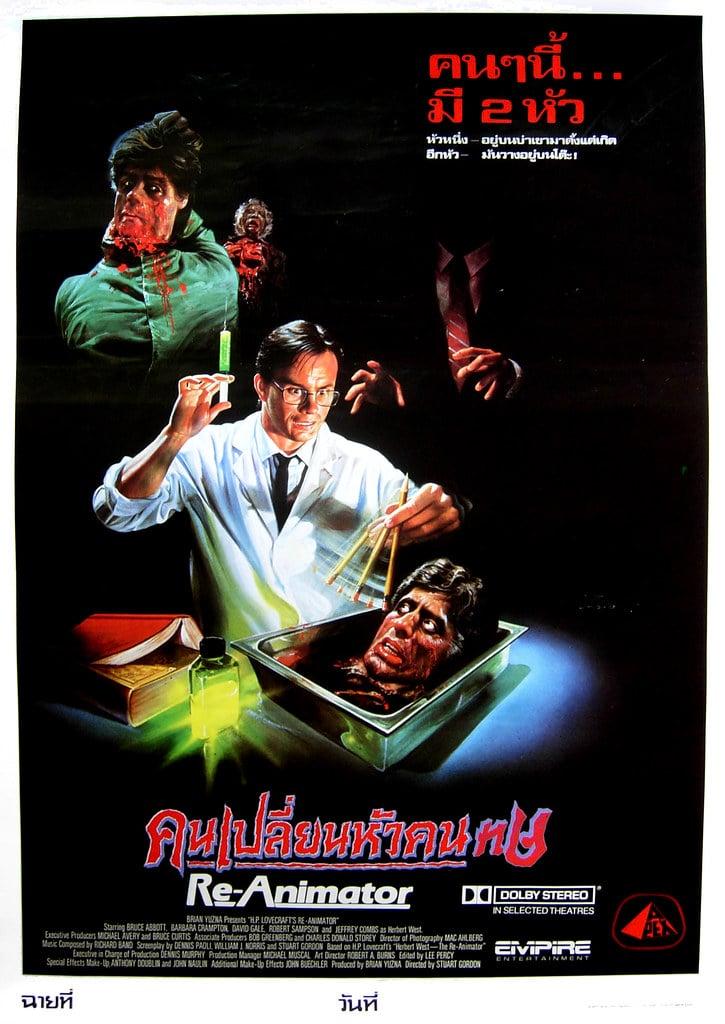 Roger Spottiswoode's Terror Train is rather misleadingly named Demon Train in Thai. With that title, you would expect supernatural elements to the plot but Terror Train is basically a slasher film set on a train. Uni students host a costume NYE party on a train (as you do) and a serial killer is also onboard to get them. This Canadian film wins the Longest Tagline with Most Exclamation Marks from me. It goes, "It comes with the wheels! It pops up through the windows! It shows up in the toilet! It springs up for an endless hunting spree! Wanna run away from it? Fat chance -- Why? The train is moving, duh!" Succinct, this is not. The Thai copywriter was inspired by the whole train concept, perhaps. 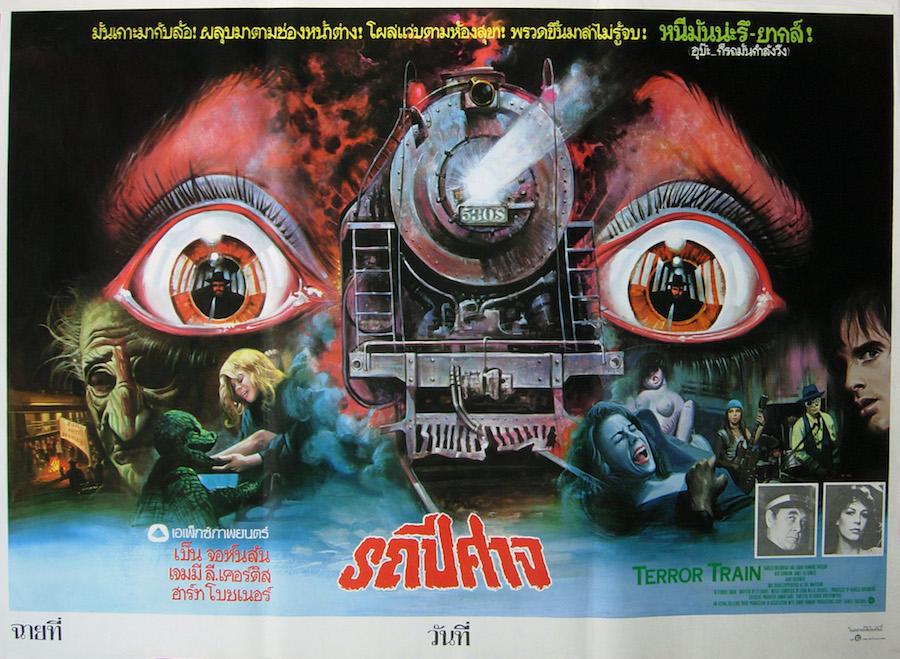 Unbelievably, Am I Wrong For Not Being Human? is the Thai name of Avi Nesher's Timebomb. The original tagline goes, "Eddy Kay was trained to kill, ordered to destroy, programmed to forget. Now, the most dangerous man alive is about to explode." It sounds like it comes from an omniscient narrator in a crisp tone, befitting a sci-fi action film but somehow its Thai tagline reads like a self-pity soliloquy, befitting an existential drama. It reads, "Humans don't want me to be humans. I was trained to kill and programmed to destroy... and completely forget about it. I'm not wrong for not being human, am I?" The translator perhaps over-sympathise with the protagonist, who discovers he's was part of a secret government programme to create assassins. 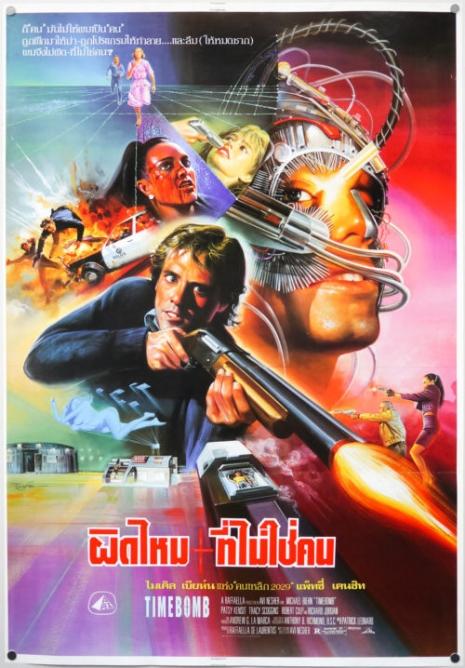 Given today's sensitivities, the Thai poster of 1985's The Last Dragon won't see the light of day due to the very racially insensitive Thai title which is "Bl***** the Kung Fu Master: You're So Great That I Love You". The tagline also refers to Taimak, the male lead, as the Black Dragon. I know we're bound to find fault whenever we judge things for the past with today's values or standards but this poster wasn't that long ago. Trying to be condescending and cute at the same time? WTH! 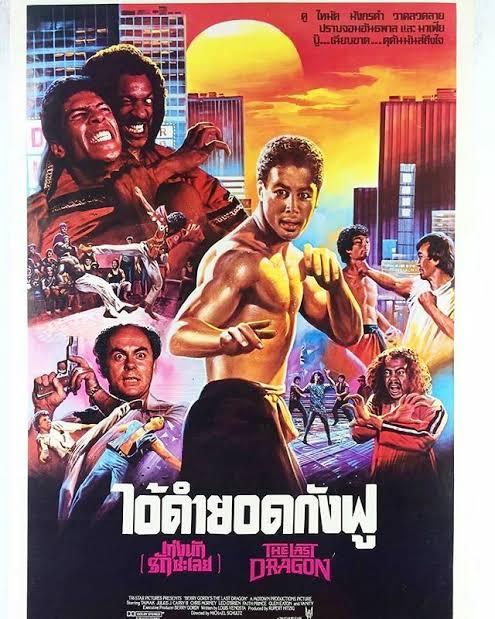