Despite the fact that a majority of the Thai population claim to be Buddhists, they go all out to celebrate Jesus Christ's birthday every year. Even though they may not be aware that it's his birthday and Xmas isn't even an official holiday despite all the lights and Christmas trees that pop up across the country. I've gone down Bangkok Post's archive (Xmas pun intended) to present a few quirky and local twists on the worldwide holiday. While they may not be unique to Thailand, they are definitely memorable. Merry Christmas, everyone! 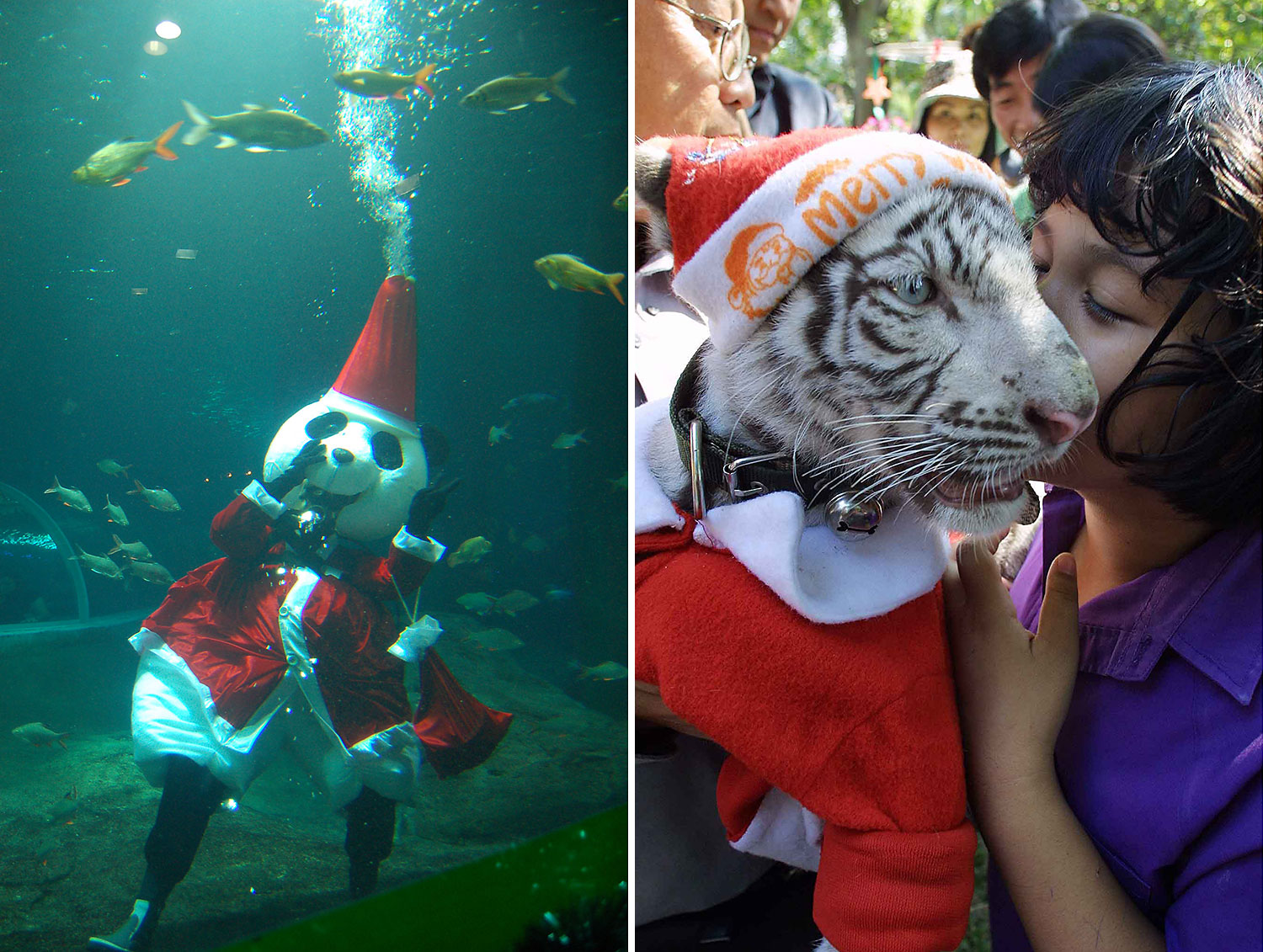 While I do not know the origins of dressing up animals as Santa Claus as a way to commemorate Xmas, Thai zoos seem to be fond of this tradition when Dec 25 comes around. The now-defunct Dusit Zoo used to dress up camels, elephants, monkeys and white tigers as Father Christmas. Not sure how Peta feels about this practice but they all looked very cute. An honourable mention must be made for Chiang Mai Zoo Aquarium because, while aquariums usually use divers dressed as Santa to spread joy this time of the year, they went above that in 2009 by using a diver in their panda mascot costume dressed as Santa Claus as part of a promotion for their Xmas festival. Very cumbersome but definitely cute.

Besides all of the Xmas decorations and trees that have popped up at hotels and malls across the country, there have been a few unique creations that are worth mentioning. In 2003, Thai style house made from gingerbread was displayed at the Hilton Hua Hin Resort & Spa Hotel. In 2007, a house made from gingerbread was on display at The Nai Lert Park Hotel. A life-size gingerbread house, anyone? In 2008, a giant Christmas tree made of candy canes was created at a hotel in Bangkok. The 6m-high and 3m-wide giant Christmas tree was made of 52,009 candy canes. 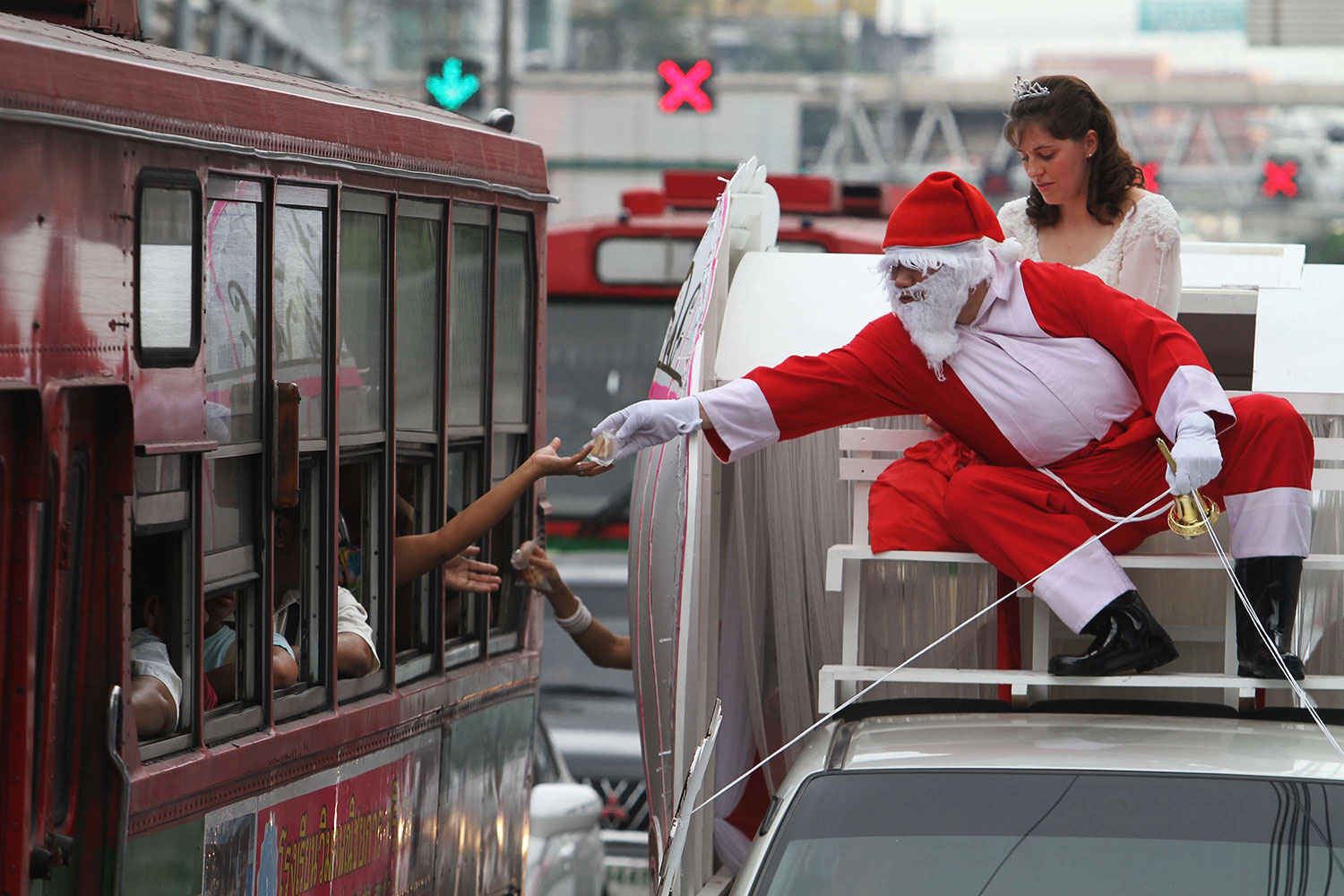 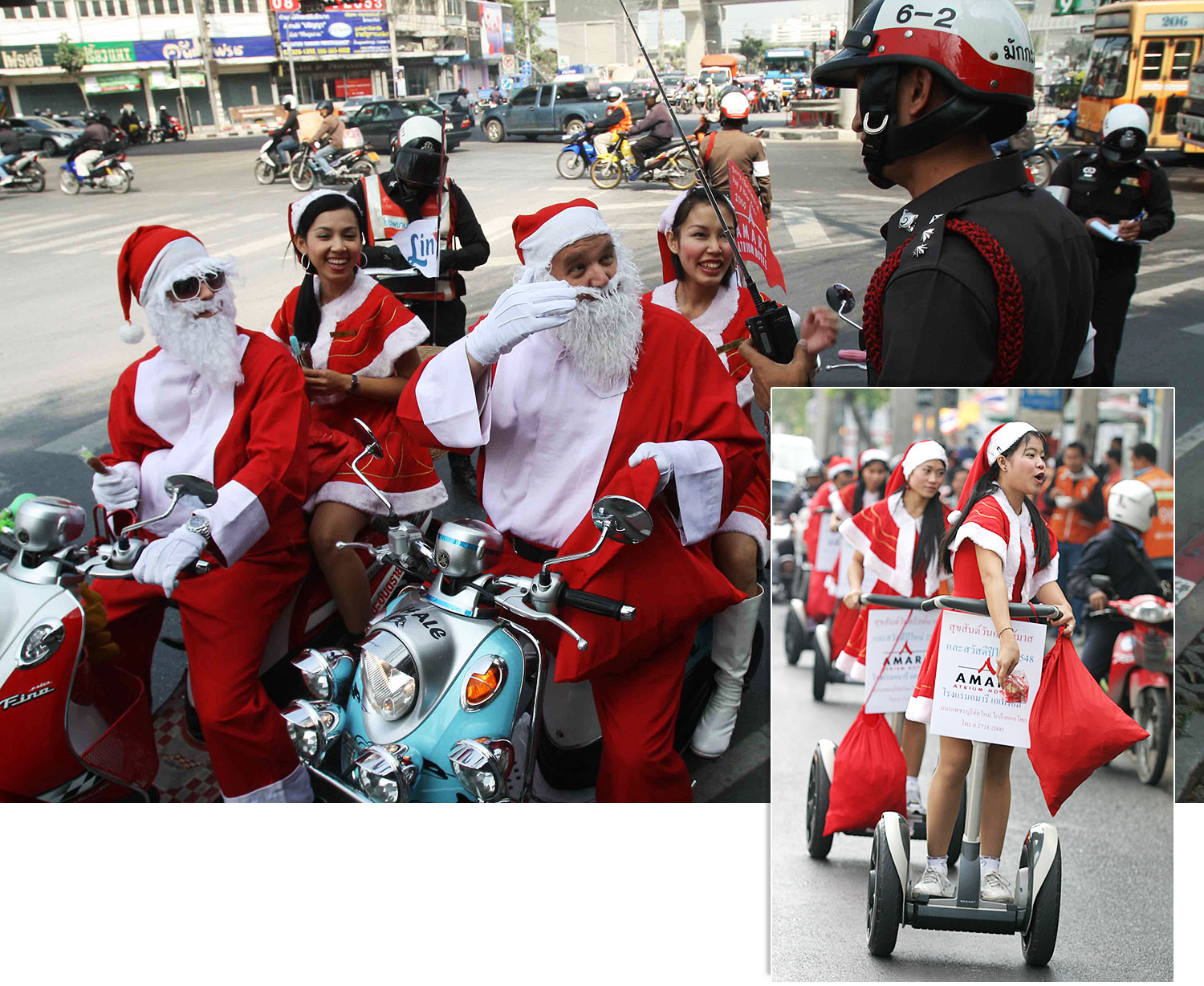 Hotel representatives dressing up as Santa and his elves to give gifts to people on the streets of Bangkok is part of Thai-style Xmas tradition. Over the years, choices of vehicles for these band of merrymakers have varied from Segways to scooters to pickups. A good way to get your hotel's name out to people while spreading joy and go, "Ho ho ho" without offending anyone. Not sure how the traffic police feel about it, though. Prepare to be fined for not wearing a crash helmet should you attempt the same feat. 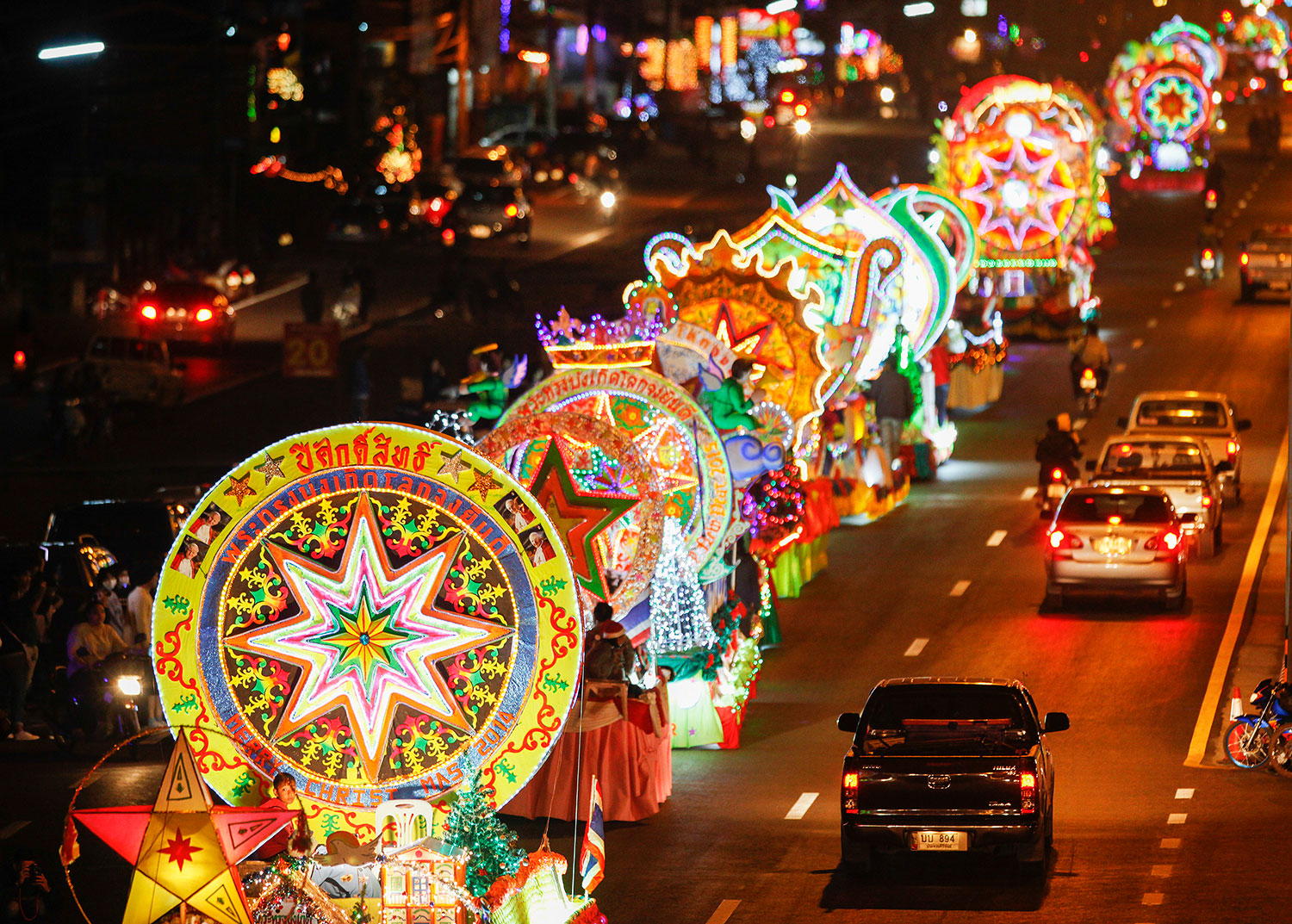 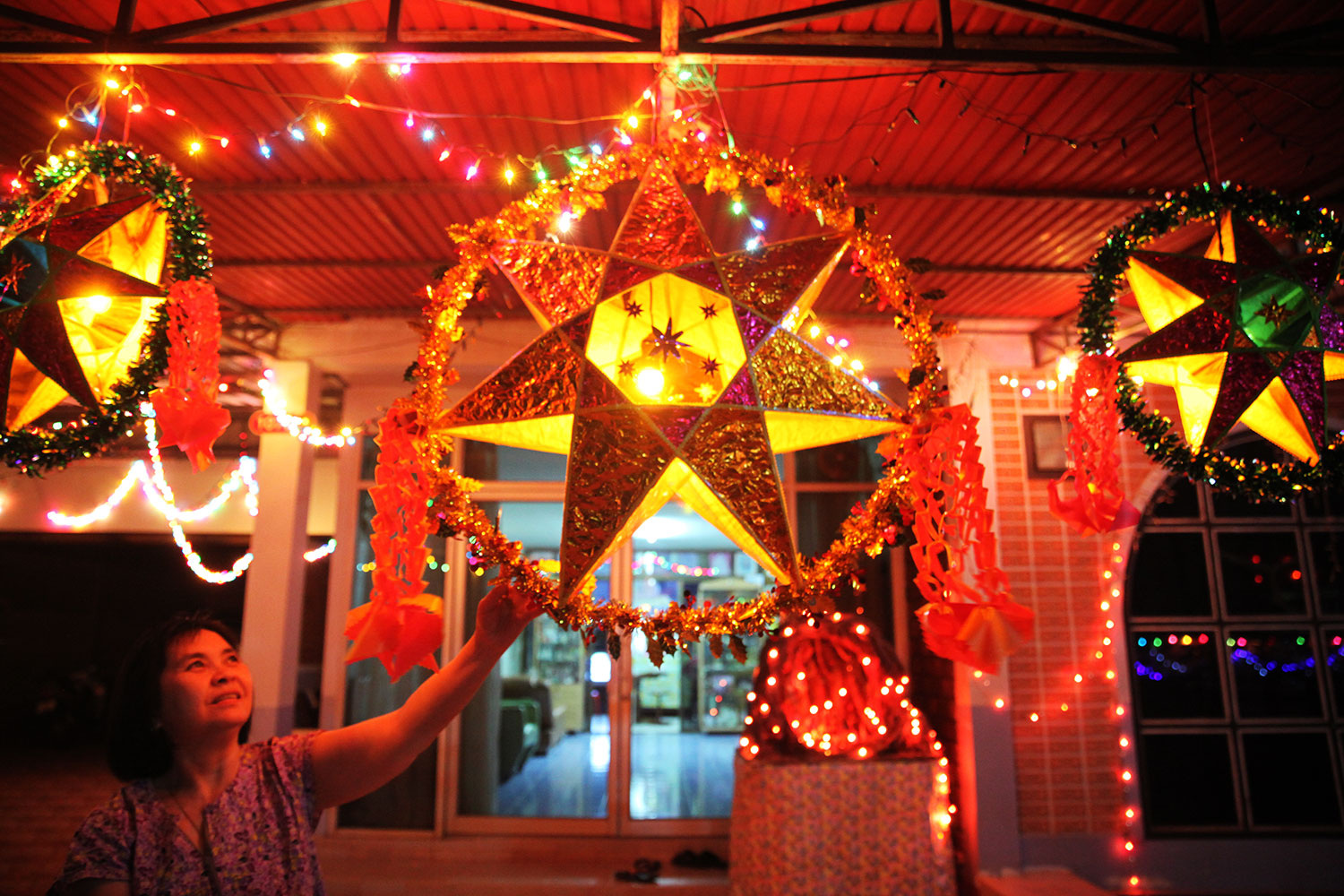 The Christian community of Ban Ta Rae in Sakon Nakhon's Muang district takes part in the annual Christmas Star Procession as part of their celebrations. The locals also decorate their houses with colourful lighting in preparation for the procession. They also make Christmas stars for sale. The star represents the Star of Bethlehem that guided the Wise Men to the manger where Christ was born. The more you know.