Former first lady Imelda Marcos, second left, holds hands with her son, the new Philippine President Ferdinand Marcos Jr, second right, as they stand with family members after he took his oath of office, during the inauguration ceremony at the National Museum in Manila on June 30. (Photo: AFP)

Newly elected Philippine President Ferdinand Marcos Jr met with Deputy Prime Minister and Foreign Minister Don Pramudwinai soon after being sworn in. It was his first meeting with a dignitary from Asean though he had earlier met with representatives from the US, China and Japan. Suddenly, the old flame of friendship between Thailand and the Philippines was being rekindled.

It was supposed to be a 15-minute courtesy call but turned out to be a hefty discussion session lasting 35 minutes. The two talked about food security in the Philippines, Asean affairs and the crisis in Myanmar, as well as prospects for Thailand and Philippine relations. They even found time for a little nostalgia, reminiscing about the visit of the late King Bhumibol Adulyadej the Great and Queen Sirikit the Queen Mother to Manila in July 1963 even though the invitation came from the late president Diosdado Macapagal. Five years later, President Ferdinand Marcos made a three-day state visit to Bangkok in June 1968. King Bhumibol presented an honorary degree of law to the president. Now his son has told Mr Don that he will be attending the Apec 2022 leaders' meeting in November in Bangkok.

The inaugural encounter was a good one as the new president, popularly known as Bongbong, said his country would import more rice from Thailand due to growing domestic demand. That's good news for Thai farmers and rice exporters. The Prayut government has to decide as soon as possible whether the rice deal will be done under the so-called government-to-government scheme or through solely private agreements. In the past, such deals were regulated by the government to guarantee the export price. That was when Thailand was the world's No.1 rice producer and exporter. Now, India and Vietnam are two major rice growers with competitive export prices. However, later on, Manila changed the procurement system and relied on the market mechanism. It is likely that the Thai government will respond positively to Bongbong's appeal.

During the meeting, the new president also touched on the negative impacts of the Russian-Ukraine war, which have affected countries around the world. The five-month war has already caused food crises. Due to time constraints, both sides agreed that there will be a new round of the Joint Commission on Bilateral Cooperation early next year after a gap of nine years.

Lest we forgot, the Philippines was the first country in Southeast Asia to sign a trade cooperation agreement with Thailand back in 1949. But bilateral trade volume was not impressive reaching only US$10.8 billion (385 billion baht) in 2020, where Thailand has enjoyed a trade surplus. Thai exports are mainly computer parts, electronic circuits and products, cosmetics and edible oil. 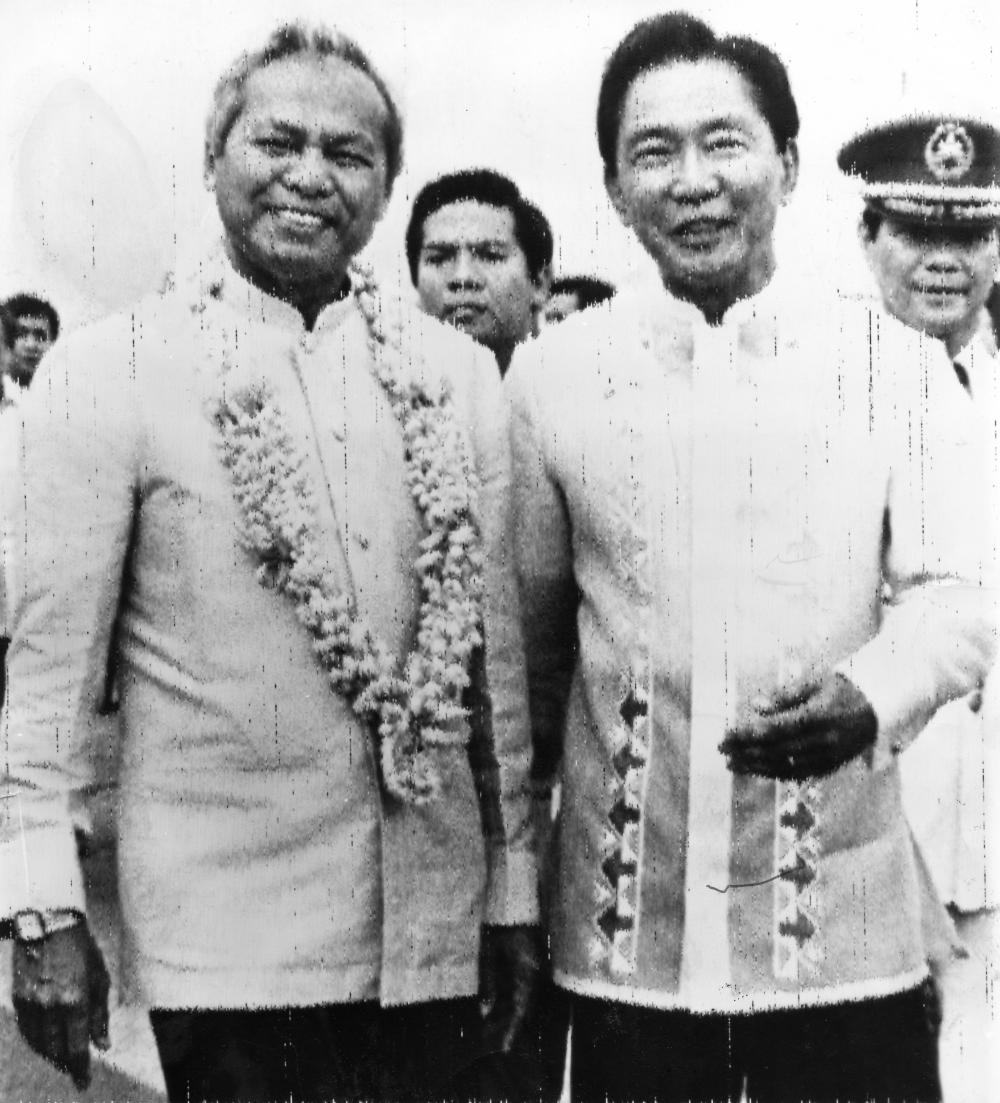 The late former Thai prime minister Prem Tinsulanonda, left, is seen during his Asean country tour in 1980 with the late former Philippine president Ferdinand Marcos in the Philippines. Bangkok Post

It is hoped that upcoming rice exports will augment the trade volume. Dusit Thani Group, Charoen Pokphand, and Ital-Thai are big investors in the Philippines amounting to US$238 million, while Filipino investors such as San Miguel and Monte Nissan, putting in US$520 million, focus on beverages and consumer goods.

During the Cold War, Thailand and the Philippines were considered buddies in arms. They were strongly anti-communist and sided with the US as its allies. They were members under the Southeast Asia Treaty Organization, popularly known as the Manila Pact. Albeit the military pact is now defunct, its offshoot, the Thanat-Rusk Communique of 1962, remains intact. From 1950-1953, their soldiers fought alongside each other in the Korean war as part of the international peacekeeping force. Thailand and the Philippines were the only two Southeast Asian countries to dispatch troops to the war. Both sides suffered a total of 1,368 casualties including 116 Filipino soldiers killed. Today, the two countries' miniature flags can still be seen in the truce village of Panmunjom at the dividing line between North and South.

But truth be told, beyond that nobody has had anything to say about the Thailand-Philippines relations for ages, except on the Asean circuit. One simple reason is that the two countries have no mutual problems. To the Thais, the Filipinos are a reflection of themselves, friendly and easy going, and fond of parties. They are day-to-day survivalists. To the Filipinos, Thais are like twin brothers raised by different partners who speak Thai. Lo and behold, among us, we cannot tell the difference until we open our mouths and speak.

The golden years of Thai-Philippines relations ran from the 1950s to the 1980s, a time when the two countries were in the process of pump-priming economic development and progress amidst the mounting communist threat. Their efforts to improve the standard of living and promote social stability and poverty eradication as a means to fight communism were well documented. Throughout this period, under the US security and development umbrella, both countries cooperated closely in all fields both in agriculture and technical development.

In the mid-1980s, the Filipinos dominated the middle-level managerial positions in both local and Western companies in Thailand. Today, Filipino technical and managerial skills are still in demand as their forebears have left memorable legacies in the Thai business community. Furthermore, at present around 30,000 Filipinos are working in Thailand, mainly as English teacher, nurses, managers, among others. Only 2,000 Thais reside in the Philippines mostly as students and expats working for Thai and foreign companies.

For decades, Filipino crooners pleased the Thai and foreign crowd in five-star hotels, restaurants and bars. Some of them became mega-stars such as Christina Aguilar. In 1951, Little Home Bakery opened and introduced Filipino bakery items to Thais. In those days ma-yong-ness, as the Thais called the creamy mayonnaise, from the Philippines, used to be a must buy gift from the Philippines. Today, it is dried mango and cold-press coconut oil.

With Bongbong in charge, the trajectory of Thailand-Philippine relations is bright and will involve more engagement. Judging by the brief conversation Mr Don had with the president, the Philippines will reach out to mainland Southeast Asia as never before. During the administrations after Marcos Senior, the Philippines has identified itself as an archipelagic Asean member and tended to act and think unilaterally. It is hoped that from now on, the Philippines will reach out more to continental Asean members, which are a good source of food security.

At a different meeting between Thai and Filipino senior officials, both sides were on the same page on all issues related to great powers' relations, supporting multilateralism, peaceful settlement of regional issues, among others. Most interesting was the discussion on the situation in Myanmar. With the current administration, Manila's views towards Myanmar will be less bombastic. After all, Teodoro Locsin, who was well known for outrageous comments on foreign policy issues, is no longer foreign minister. The new foreign minister, Enrique Manalo, who served as the UN permanent representative, knows the region well. He will support the Asean effort to ensure the full implementation of its five-point consensus.

In the coming months, Thailand and the Philippines will become more strategically engaged. Most importantly, their cooperative schemes would be diversified as never before. Under this circumstance, the speed of Gen Prayut's decision on the rice deal will serve as a barometer of how Thailand is recalibrating its ties with its old pal.

Fountains in Tehran appeared to be pouring blood on Friday after an artist turned their waters red to reflect a deadly crackdown amid weeks of protests in Iran sparked by the death in custody of Mahsa Amini.