Blasts from the past with Thai film posters
Opinion

Blasts from the past with Thai film posters

Thai posters of Hollywood films have rightfully gained something of a cult following (movie pun intended). They are an art form in their own right since Thai artists took the liberty of creating local versions of famous Hollywood films and reimagined them in a new light by hand, often adding key moments from the plot almost to the point of revealing spoilers as opposed to the subtle approach of their originals, which depicted just enough to pique your curiosity.

As a bilingual Thai, these localised posters become even more fascinating as local film distributors try to entice moviegoers with bombastic copywriting through Thai titles and taglines (that sometimes deviate from their original to a humorous effect). Here are a few blasts from the past. Soft spoilers alert is now in effect. Also, if horror films aren't your thing, you may find these posters unsettling.

A Nightmare On Elm Street's original poster is terrifying enough with Freddy Krueger's claws hovering over the protagonist, but the Thai version upped the gore game with more bloody moments, including the ceiling kill that gave me an actual nightmare when I watched it eons ago. The supernatural slasher film's Thai three-syllable title translates to "Devouring Fingers", which is succinct and more effective in catching the attention of Thai moviegoers than a nightmare on a street in a foreign land. The Thai tagline also has nothing to do with the original, which goes, "If Nancy doesn't wake up screaming, she won't wake up at all." It's definitely more ominous than the Thai counterpart, which cheekily goes, "Do you want more fingers? Here they are!" What?! 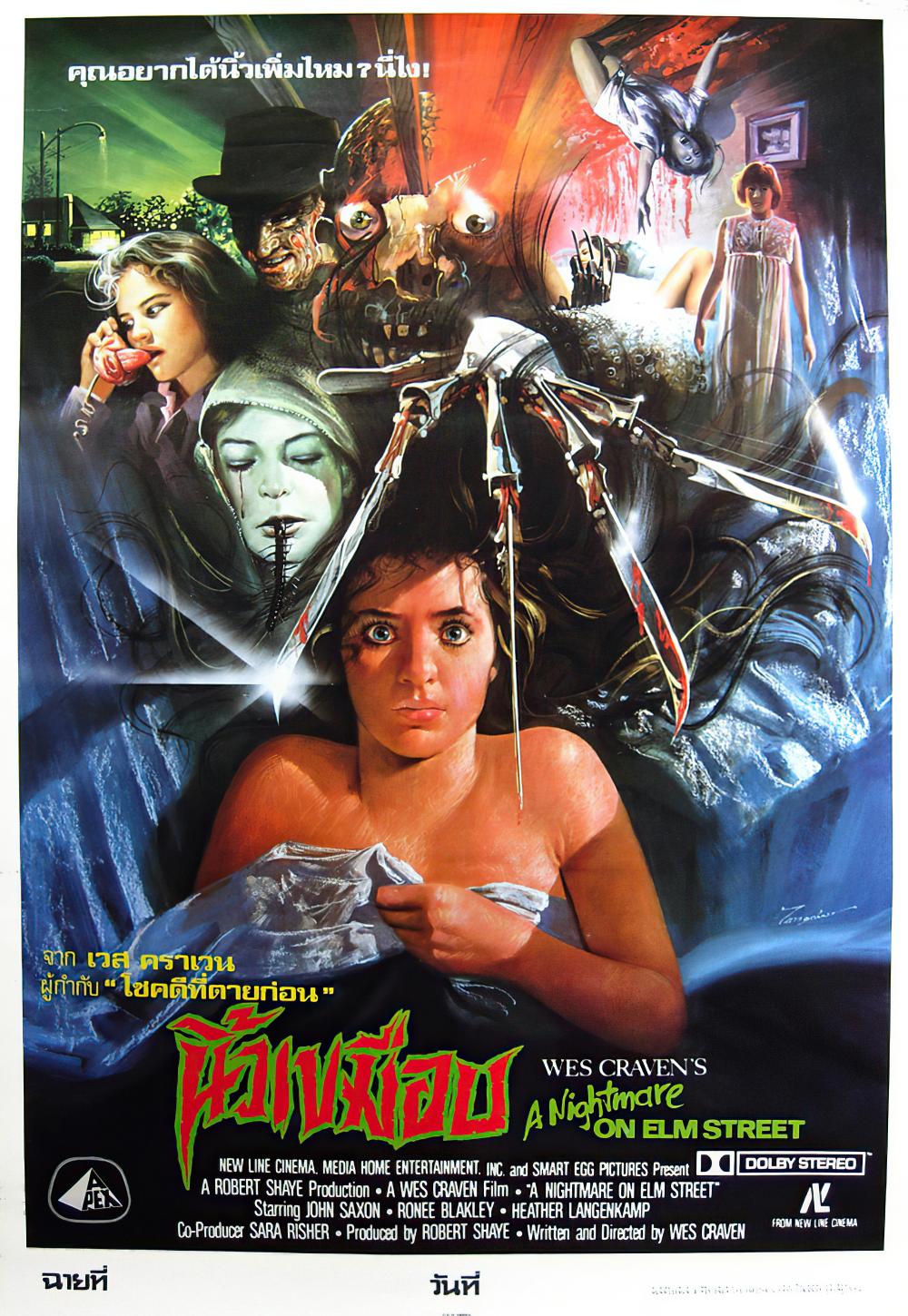 Canadian sci-fi horror Scanners' Thai title is simply its transliteration with Thai letters. A good call since if we were to go the usual route of overexplaining we may get "People who can make your head explode with their mind." The Thai poster is much louder and more colourful, and features that head-explosion scene that really sticks in your head. 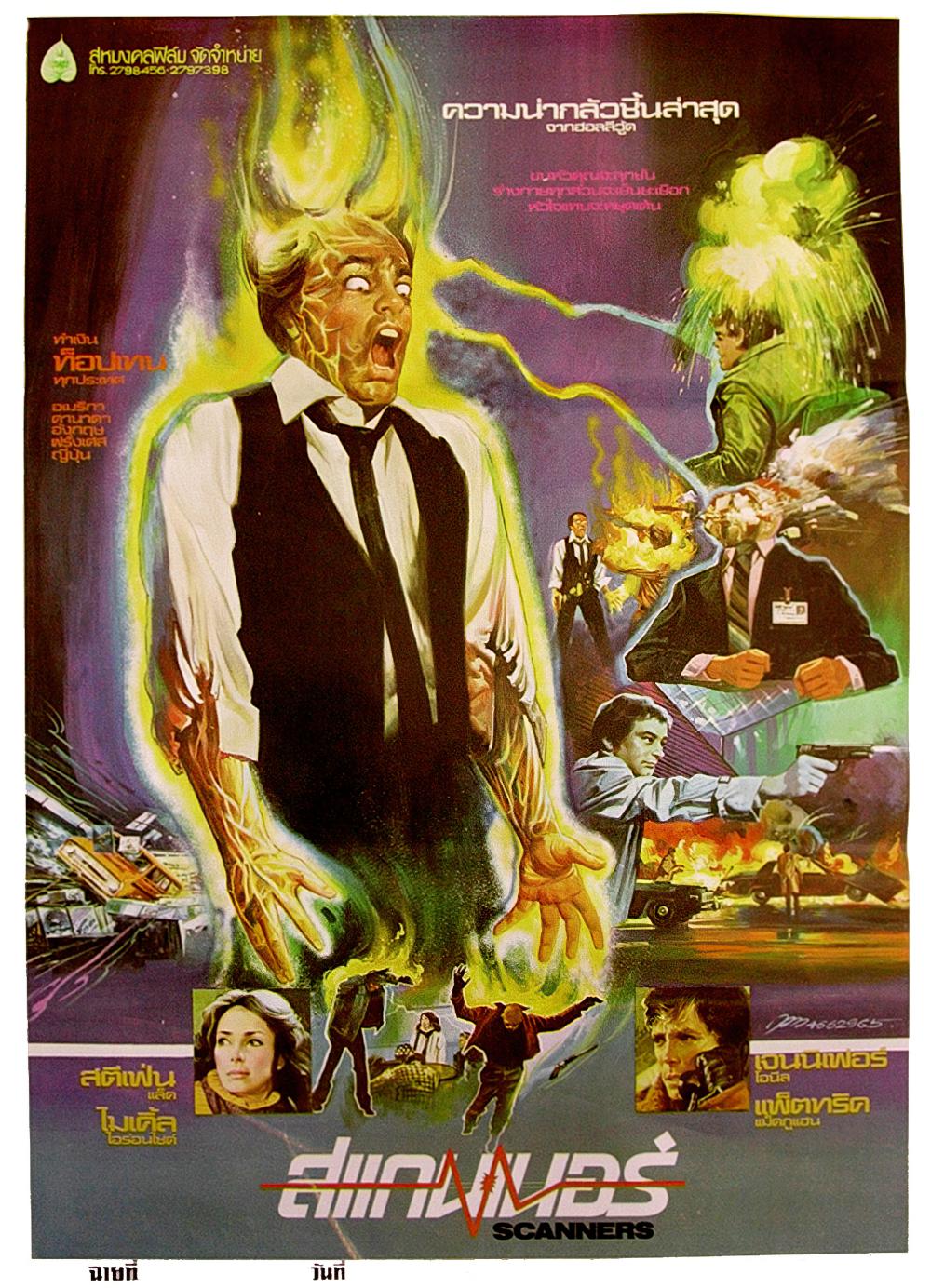 The creator of the Thai poster of the 1980 horror film Death Ship took the liberty of almost reimagining the original. While the ship with a ghostly face is kept, a skeletal hand reaching for the viewer is added along with the emotional faces of the cast. If that doesn't stray far from the original poster enough, the Thai tagline contains a spoiler in parenthesis. It reads, "It roams every ocean and crashes into every ship (just because it's fully loaded with Nazi demons!)" when the original tagline goes, "Those who survive the ghost ship are better off dead!". To make sure that no one misses this spoiler, Adolf Hitler himself made a cameo appearance on the Thai poster, too. 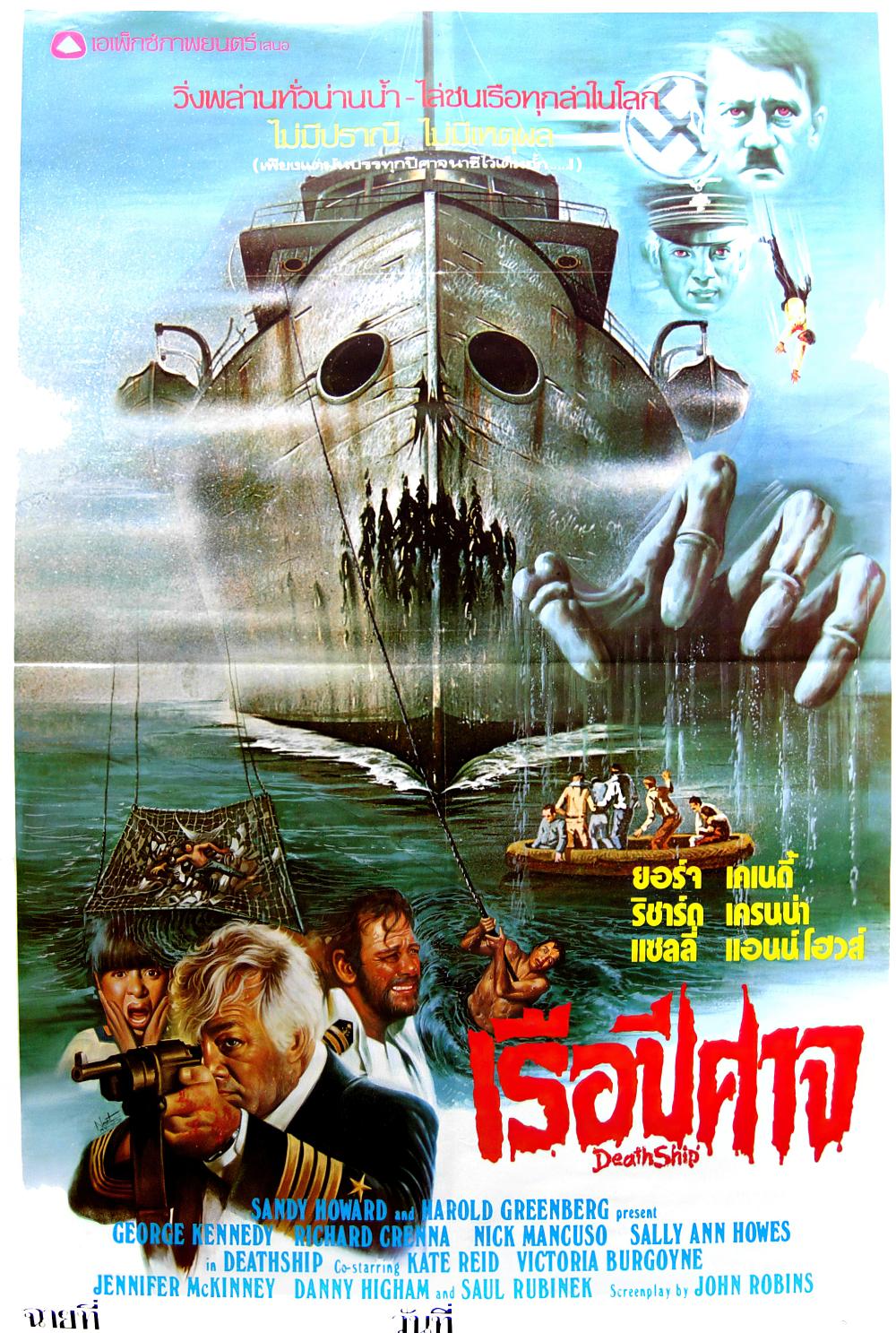 Compared to their contemporaries in the 80s, the Thai poster of horror-comedy Ghoulies stays rather faithful to the original, except for the two monsters floating at the top. The English-to-Thai transliteration is recreated into its Thai title while keeping the same type of font. What is so curious about it is the drastic difference between Thai and English taglines. The latter goes, "They'll get you in the end!", which somehow inspired the former that reads, "Weird monsters born out of non-brand toilets!" Why non-brand? 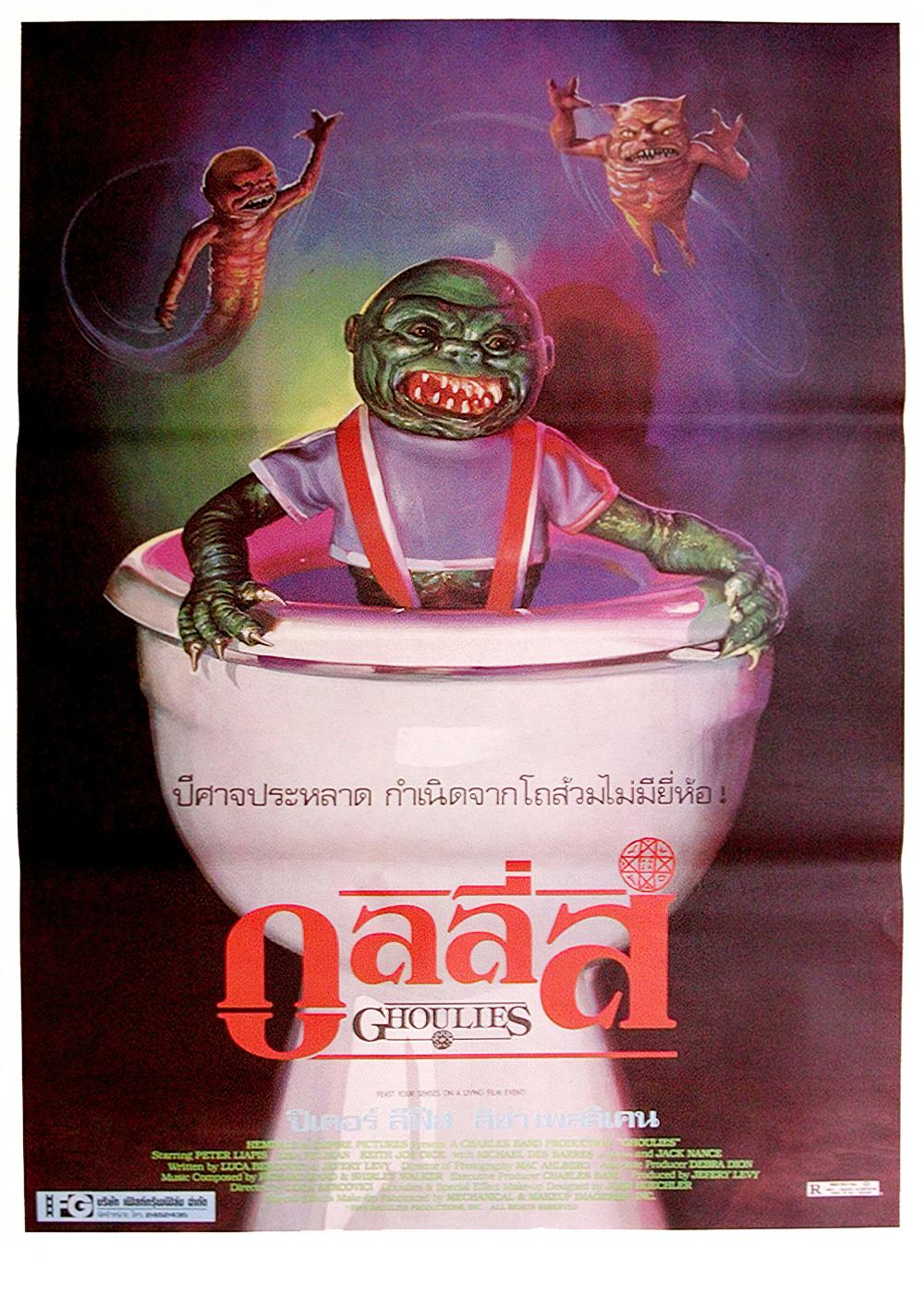 Lovecraftian horror From Beyond is perhaps the most curious case of Thai film posters I've come across. Besides the usual localisation, it was (misleadingly) marketed as a sequel to Re-aminator, also a lovecraftian horror film, because they shared Stuart Gordon as the director, Jeffrey Combs as male lead and Barbara Crampton as female lead when From Beyond is a standalone story and Re-animator went on to spawn two actual sequels. The more you know. 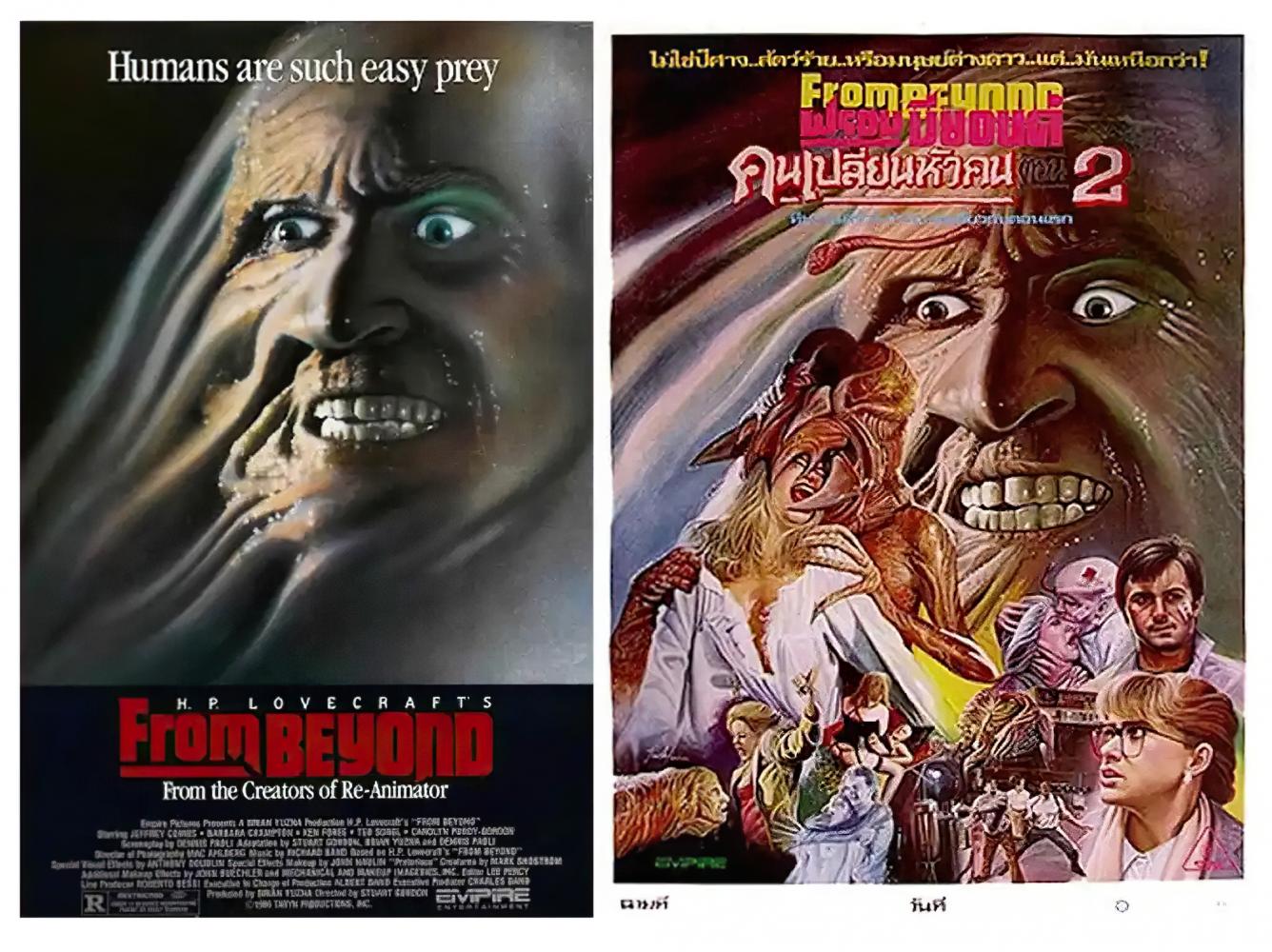