When art gets stifled
Opinion

When art gets stifled

A man in wizard robe raps against dictatorship at the rally on Silom Road on Oct 29, 2020. (Photo: Thana Boonlert)

'Art is short, a case is long," read a banner. Students apparently hijacked the well-known motto "art is long, life is short" by Prof Silpa Bhirasri, the father of Thai modern art, in protest of Chiang Mai University's legal action against its own lecturers and a student who "trespassed" on the art centre to exhibit works, some of which might challenge those in power, last year. It is a case in point for stifling democracy in Thai art.

On Nov 10, university instructors Thasnai Sethaseree and Sorayut Aiemueayut and their student reported to a police station to acknowledge charges brought by the former dean of the Faculty of Fine Arts, and then marched to their office to call for dropping the lawsuit and a probe into alleged misconduct. The prosecution should not be brought in order to uphold academic freedom, they said.

In October last year, students were scheduled to hold an annual graduation exhibition titled "Whiplash". They sought permission from the university's art centre, but the faculty denied access because some of their works dealt with "political issues". After quite a tussle that could delay the installation, the museum was locked. Some lecturers and students broke open the gate and entered the building to set up the exhibition anyway.

Some of their contentious works included criticism of official logos that feature traditional patterns and deity figures like Indra and Narai. In an interview with The Matter, the student who conducted research on the topic under her instructor's supervision argued the patterns and figures are influenced by supernatural beliefs, which explains why people must beg for help because state agencies incorporate divine or aristocratic elements into their identity.

Can we really separate art from politics? I think artists can personally choose whether to engage with political issues (an oft-quoted view that art is just escapism), but once their works enter the public arena, it is inevitably beyond their control. Even if they claim to produce apolitical, aesthetically independent art, they cannot monopolise interpretation or avoid criticism for disregard of pressing issues, such as human rights abuse and political conflict. No matter how beautiful their works are, aesthetes may have to pay the price for irresponsibility.

It all comes down to "the death of the author". Roland Barthes, a literary theorist put forward this seminal idea in his eponymous 1967 essay, that the text's meaning is not created by the author, but by the reader. We cannot give ultimate authority to the artist because the artwork contains influence from thousands of cultural sources to be pinned down even by the original creator. No matter how apolitical my doodling seems, some viewers can argue that it is an antidote to the dehumanising effect of capitalism. Even though they want to focus on the autonomous work of art, we have come a long way from formalism, the artistic movement in the first half of the 20th century whereby the most important aspect of artwork is its form rather than content or relationship to the external world. It was already challenged by other reactionary theories, especially postmodernism which expresses scepticism towards metanarratives or objective reality. How can the work of art remain detached from its socio-political context?

In fact, art is very political. It can retain aesthetic appeal, but at the same time instil ideologies into viewers. Meanwhile, art spaces can provide a platform for different ideas. But in Thailand, where democracy never grows, art has been mainly produced to serve those in power. In his 2019 article, Thanom Chapakdee, the late artist, critic and lecturer, argued that the Thai state has dominated art on behalf of the royal court since the Siamese Revolution in 1932. Propaganda art has been used to promote nationalism to counter threats in each historical period, for example political opponents. 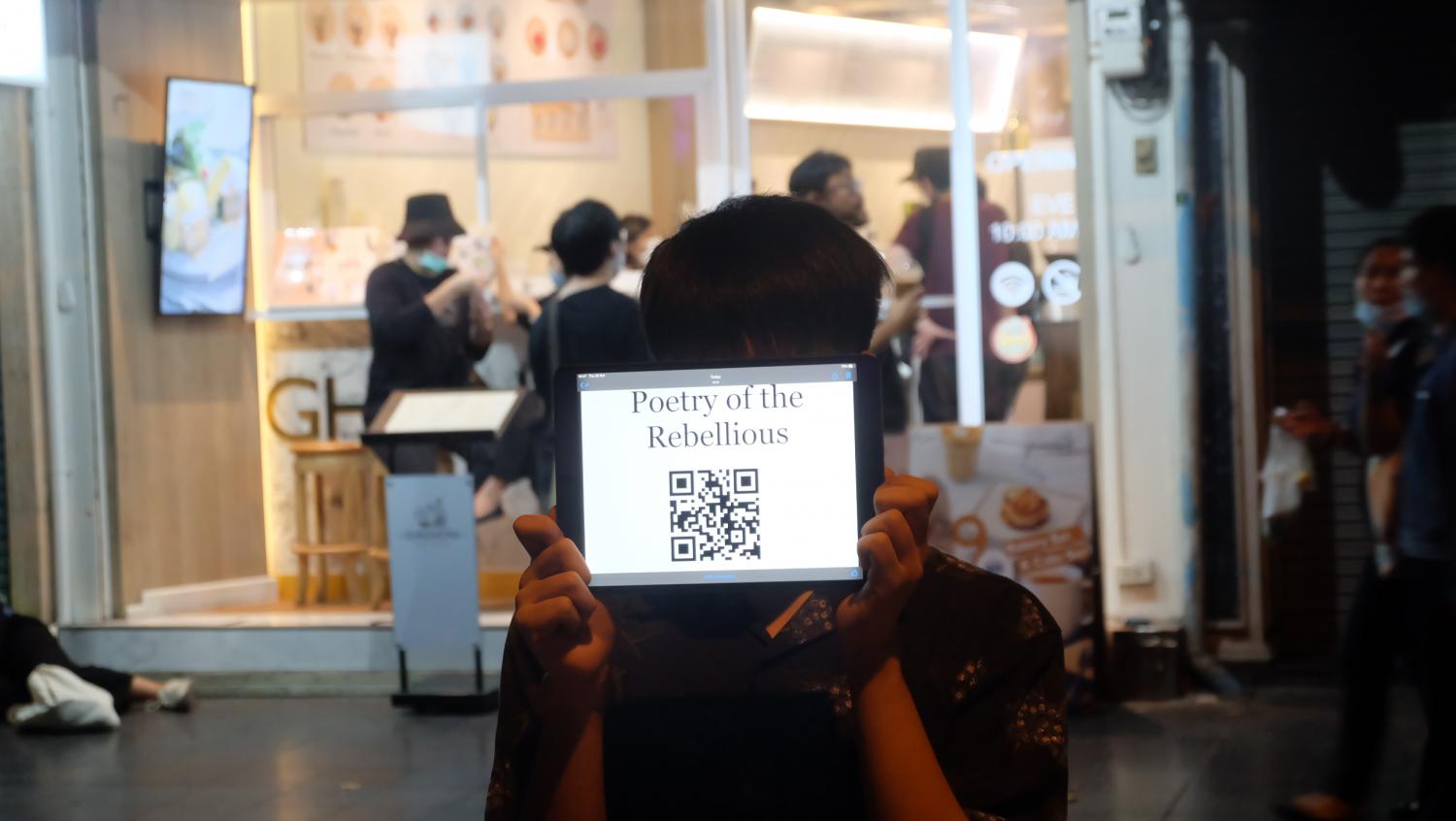 A student exhibits his rebellious poetry at the rally on Silom Road on Oct 29, 2020. (Photo: Thana Boonlert)

The Thai state has little room for dissident artists. After the putsch in 2014, many faced intimidation and lawsuits. Some ended up in self-censorship, while others fled the country. In 2017, officers ordered galleries to remove political artworks from exhibitions, including a picture of military students pointing guns at a cameraman. In 2018, police threatened to press charges against the local group Rap Against Dictatorship after their scathing song titled Prathet Ku Mee went viral. It was participation in a youth protest in July 2020 that resulted in a band member being charged.

After the disputed election in 2019, the artistic tussle between conservative and progressive values continues. The advent of the pro-democracy movement in 2020 lends support to the emergence of popular art. As Pierre Bourdieu, a sociologist, discusses in his work Distinction, unlike legitimate taste, popular taste or aesthetic is based on "the affirmation of continuity between art and life" and "deep-rooted demand for participation". In October 2020, political artworks were displayed under the theme of "Art Of Ratsadon" (People's Art) on Silom Road. On view were fashion shows, performances, paintings and even poems that challenge the country's rigid hierarchical structures.

However, the government's crackdown on political dissent is sapping the creative industry because it creates a climate of fear and therefore backfires on the promotion of much-yearned soft power. That is why the country's art remains trapped in the past and fails to engage with younger generations. Even an innocuous standup show by Udom Taepanich landed him in trouble after Srisuwan Janya filed a complaint with the police last month. Art can flourish where freedom of expression is allowed. If not, it is not just short, but dead.

Thana Boonlert is a feature writer for the Life section of the Bangkok Post.

Thana Boonlert is a writer for the Life section and a Bangkok Post columnist.