A search for land justice on Koh Lipe
Opinion

A search for land justice on Koh Lipe

Lipe island was once a quiet, pristine paradise populated by the Urak Lawoi sea gypsy tribe. The island is now a tourism destination where local people are victims of illegal land grabs from outside investors. Photos by Transbordernews

When asked about the sea gypsy way of life, Saluoy Hantalae's eyes flashed with happiness. The woman of Urak Lawoi origin from Lipe island, rushed to bring a ga-bang boat (traditional boat used by sea gypsies) model and explained vividly.

"It was fun faring the sea with grandpa and papa. During a trip which normally took 15 days, we explored and dropped by one island after another and stayed overnight when it got dark. Papa would tell me where and when fish were plentiful. Or the place we could get more seashells. I remember everything.''

With the sea knowledge that was passed down from her grandfather and father, the woman, who is now 62, earned a living as a fisher almost all her life.

The ga-bang boat is now a thing of the past. So is her life as a fisher. As Lipe becomes a top tourist destination, the island has experienced aggressive land grabs as resort operators use better law knowledge to take away ancestral land from the fishers. Like other Urak Lawoi people, Ms Saluoy has little education. She left school after Prathom 4, when she was just over 10 years old, to help with the house chores. She then went to sea as a fisher.

Before they knew it, Ms Saluoy and the villagers were no longer legal owners of their land.

The beach of old Lipe was once lined with coconut and pine trees, Ms Saluoy recalled. The villagers' huts were nestled among them. The villagers are mostly descendants of Kiri Harntalae or Toh Kiri, one of the sea explorers who settled down on Lipe over a century ago. They passed on the land to their children, who were scattered in groups.

When grown up, she moved from her parents' house, a bit farther away but still close to the sea.

The land Ms Saluoy lived on was passed down by her ancestors. No one cared about land title deeds then. They did not know what the documents were. It was their belief that the island was large enough to accommodate all the villagers. If anyone wanted to have more land, she or he just cleared the vegetation.

In 1990, Ms Saluoy and her mother again moved house further into the island after a relative who wanted to open a small shop asked them to. Her mother accommodated the relative's wish. It was then a trivial matter.

Shortly before that, Lipe villagers started to learn of the term "land title deeds." An outsider, who married Toh Kiri's daughter, volunteered to acquire land documents on behalf of the villagers. Ms Saluoy said she was not interested in the offer then.

The land conflicts heated up after the 2004 tsunami hit the area. An outside investor told the villagers to sell their land to him, and those who didn't agree were threatened. He seized the land from those without land ownership documents. 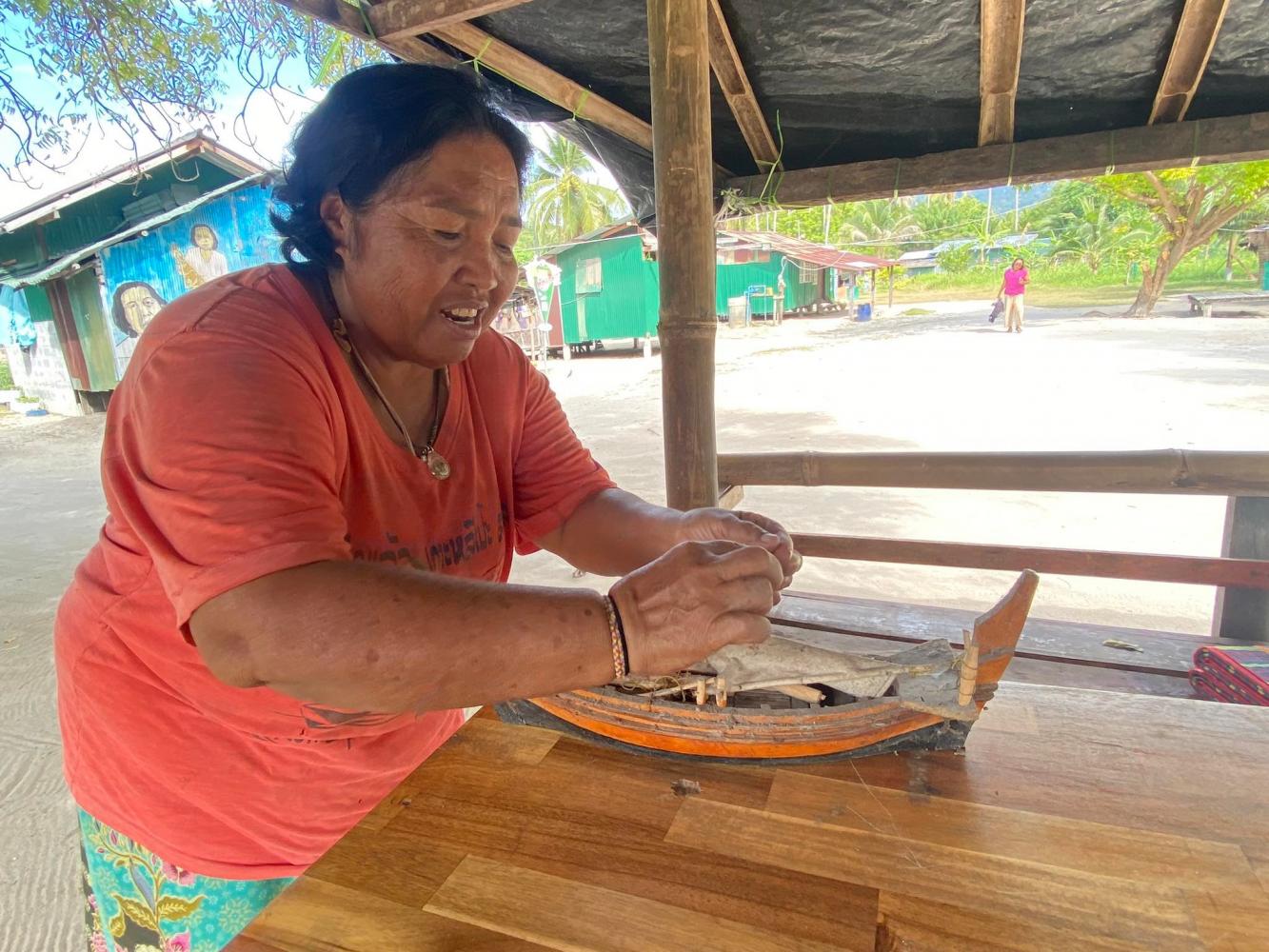 Despite the Urak Lawoi people having lived there for over a century, not many registered to obtain documents such as Sor Kor 1 or Not Sor 3 to acknowledge their ownership and use of land. Language barriers and lacking knowledge prevented them from doing so.

It found that the land under the Sor Khor 1 document initially totalled only 50 rai. But when the document was upgraded to Nor Sor 3, the developer had the document cover 81 rai and later 150 rai. Because Ms Saluoy and other villagers did not acquire land documents, they technically lost their ownership rights. The developer then blocked the walkway that villagers used.

Ms Saluoy lost the court case. But the Appeal and the Supreme Court handed the land back to her on the grounds that she was the original land owner. Villagers needed to ask for the help of civic groups and even the National Human Rights Commission to force state agencies and Tarutao Marine National Park to provide original aerial photographs, land records and any past registrations to show that Ms Saluoy and other villagers had been living there before.

"We are illiterate. We have no money for legal procedures. It's difficult to travel from the island to the court. In court, they talked in a language we were not familiar with, which was different from ours. We could not explain things as we wished to. At first, we thought that we would go to court just one time, but the battle dragged on, with several trips."

But Ms Saluoy was still lucky as the non-profit Thailand Foundation sent lawyers to help at the court so she could keep her land rights. But several Urak Lawoi villagers were not so lucky.

"At first, we hired private lawyers. We had to sell our boats to get money for the court fight. Without boats, it's like we have our hands and legs cut off. But we had no choice," she said.

"Of course, we are sad. We used to go to the sea, get fish and seashells for a living, or to share. Without boats, we can no longer do that. Life has changed."

Now some villagers embrace tourism by providing boat trips to tourists. But deep inside, they yearn for the chance to go back to the fisher way of life, which is in every Urak Lawoi's blood.

Tourism brings in money. But ironically, it also brings trouble as a result of the fierce land grabs. Beach areas where Ms Saluoy and fellow villagers used to roam freely have been occupied. Some developers even try to block them from infrastructure, like roads and canals, as resort operators want to make their properties and beaches private.

"The villagers do not want much. We just want the land for a living, we are not trespassers. We just want a small plot of land to live on, walkways to the sea, and a burial place for the dead," Ms Saluoy said.

"Lipe may be a faraway land, but we are also patriots. Please don't marginalise us. Please pay heed to our voices as we cry for help, and solve these problems for us. We want to keep our ancestral land for our children, not sell it."

Since local authorities hardly responded to their problems, Ms Saluoy and a group of villagers travelled to Bangkok this week to submit a petition to government agencies like the Land Department in the hope that the land disputes are eventually settled.

Ms Saluoy thinks community title deeds, with people sharing ownership, as a way out of the problem.

But like the local authorities, the central government remains half-hearted.

It's unfortunate that Interior Minister Anupong Paojinda while responding to a parliament inquiry last month, chose to sidestep the issue and only urged the embattled villagers to go to court.

This was said despite recommendations made by the National Human Rights Commission and a government panel tasked with looking into the Lipe land dispute, which said that villagers' land rights are duly protected.

If those with authority remain half-hearted, the road to land justice will remain far off for Ms Saluoy and Lipe's people.