After four decades of developing health infrastructure and three decades of designing and implementing a number of different health insurance schemes, Thailand achieved universal healthcare coverage in 2002. Ever since, all Thais have been covered by health insurance guaranteeing them access to health services. 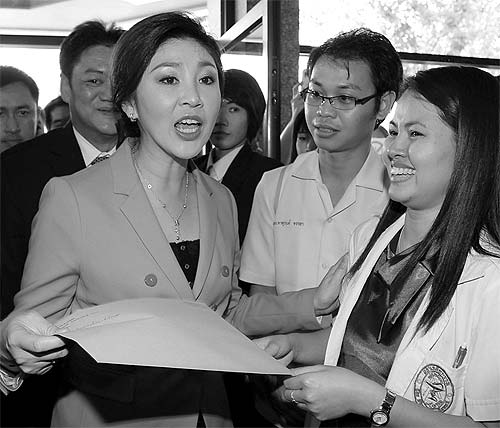 PM Yingluck Shinawatra accepts a petition from consumer activists who gathered at the Public Health Ministry earlier this month, to oppose a plan to revive the 30-baht healthcare scheme.

The key to this achievement is the universal healthcare scheme (UCS).

Launched in 2001, the UCS covered the remaining 47 million people, mainly those who were not enrolled in two other health schemes - the civil service medical benefits for government officials and family members, and the social security scheme for employees in private sector.

An assessment by a group of independent health system researchers and economists from international organisations including the World Health Organisation, found that this universal health coverage has prevented over 80,000 families from bankruptcy due to timely health treatment during its 10 years of implementation.

Impoverishment as measured by an additional number of non-poor households falling below the national poverty line due to medical treatment costs, was reduced significantly from 2.71% in 2000 prior to the UCS, to 0.49% in 2009.

Progress in the universal health scheme was also indicated by increasing outpatient visits per member per year from 2.41 in 2003 to 3.64 in 2011.

The number of hospital admissions almost doubled between 2003 and 2011. Data from 2010 showed a very low prevalence of unmet needs for health services in Thailand.

The report suggested that considering the positive results, the scheme should be maintained, even extended to minimise out-of-pocket payment and prevent impoverishment caused by healthcare expenditure among a majority of the population.

According to the book Good Health at Low Cost 25 Years On, launched during the week-long Prince Mahidol Awards Conference, Thailand outperformed many other countries in improving health outcomes at a low health funding per capita of 2,755 baht.

"Despite being a lower-middle income country, Thailand can manage to develop primary care services and put them into the national health system across the country. In addition, we spent the equivalent of only about 5% of the gross domestic product," said Viroj Tangcharoensatien, a researcher at the ministry's International Health Policy Programme.

What is the reason behind Thailand's success with the universal health coverage?

Key factors in the success of the country's healthcare system - as mentioned in the book - include interventions that are essential to mother and child health being included in universal coverage by the 1990s and provided at primary health units and district hospitals in rural areas.

The universal health scheme also provides financial risk protection for the poor and the vulnerable.

This does not mean there is no room for improvement.

A 2011 World Bank report on the public sector in Thailand highlights three challenges in the country's health system, including inequalities in utilisation and spending across the three insurance schemes, mounting pressure as well as fragmentation of financing, and the power struggle between the Ministry of Public Health as the health provider and the National Health Security Office as the health purchaser for the UCS.

Disparities between the three health schemes in expenditure were evident. Each scheme depends on its own different system of diagnosis which averages expenses for treating a certain disease. The expenses would then be calculated to arrive at treatment prices quoted by state hospitals.

However, the social security and the universal healthcare schemes depended on different prices for treating the same illness. For example, surgery for appendicitis is rated at 9,000 baht under the UC while the other two schemes would pay 18,000 baht for it.

The price of artificial lenses for cataract treatment under the UC scheme is quoted at 700-2,800 baht while those in the other two schemes stand at 4,000-6,000 baht.

While the UCS' introduction of treatment for such illnesses as peritoneal dialysis is seen as more suitable and cost effective for kidney patients in remote areas than haemodialysis, it is understandable that the change affected the income of hospitals and specialists, Dr Viroj said.

Harmonising the relationship between healthcare providers under the supervision of the Public Health Ministry and the National Health Security Office as health purchaser, and balancing the distribution of funds between urban and rural communities will be a challenge for the universal healthcare scheme in the next decade, said Samrit Srithamrongsawat, director of the Health Insurance System Research Institute.

Realising this, the previous government set up a panel called the National Healthcare Financing Development Office, to study reference prices for medicine and treatment in a bid to seek a concrete solution to inequitable access to health coverage.

However, it seems the authorities have yet to come up with any concrete proposals to narrow the gap in the benefit packages offered under the three health schemes, while the country faces a growing need for health financing.

The deep-seated power struggle between the health-purchasing and health-providing agencies is also upsetting the sustainability of the otherwise successful universal health coverage.

Political pressure on the NHSO board which holds the power to approve several billion baht of UC funding, has intensified since the Yingluck Shinawatra government came into office.

The conflict is mainly between the so-called health reform side comprising rural doctors and representatives of non-governmental organisations, and the conservative camp of the Public Health Ministry, the Medical Council and private hospitals.

Public Health Minister Wittaya Buranasiri's appointment of new experts to sit on the NHSO board and subcommittees caused an uproar among health reformists and civil sectors who pushed for the universal healthcare scheme from the very beginning. They question whether these new appointees come with conflicts of interest.

The wrangling at the NHSO is still ongoing, while the government's plan to streamline and standardise the three healthcare schemes has not gained traction.

Any wrong move will dearly cost not just the government but millions of people under these healthcare schemes.

MAYVILLE (UNITED STATES) - The suspected assailant of Salman Rushdie pleaded not guilty on Thursday to attempted murder and assault charges at a brief court hearing in upstate New York.