The sensitive issue of Section 112 is now being linked in discourse to the ongoing question of promoting freedom of speech and expression within Thailand. 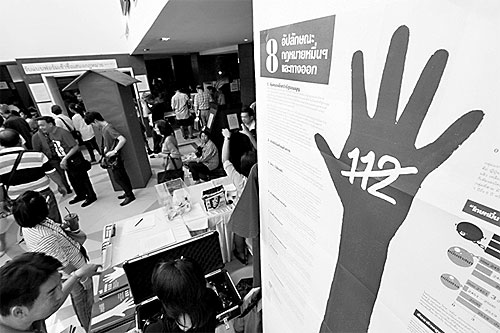 The Campaign Committee for the Amendment of Section 112 is gathering 10,000 signatures for a petition demanding that parliament debate the issue.

Essentially, there are two fundamental perspectives related to the argument for amending Section 112, better known as the lese majeste law: support and opposition. Those who call for reform have argued that in doing so, an environment more conducive towards the process of democratisation will be supported.

Thailand will inevitably have to learn one way or another, to fully accept a founding principle of democracy, which is freedom of speech and expression. No country can claim to have negotiated the road to democracy while continuing to pick and choose as and when such democratic principles suit prevailing domestic interests.

The promotion of freedom of speech and expression encourages citizens to express their own views. It also advances their capacity to be able to engage constructively in the political arena. Working towards this end will help to shift many Thai citizens out of a lingering passive and obedient mentality, which is a historical legacy; and towards becoming more actively engaged citizens within an evolving, maturing and more dynamic, vibrant democratic system.

Section 112 defines lese majeste as the defaming, insulting or threatening of the King, Queen, Heir-apparent or Regent. The maximum punishment is 15 years in jail for each offence. This may not appear to be a significant problem and obstacle in relation to the overall realisation of freedom of speech within Thailand, because its supporters have been arguing that the law only punishes those who act against the law. Although this argument initially appears fair and reasonable, it can only make sense if Section 112 was never opportunistically co-opted for political motives. And there must also be the presumption that there has not been too much room left open for interpretation by officials, which can be a decidedly grey area when it comes to such matters.

Various groups, especially from within the anti-Thaksin camp, have attempted to link the mobilisation to amend the article led by the Nitirat group and composed primarily of academics, with implicit support for Thaksin Shinawatra and his political alliances. But it is a logical fallacy to attempt to directly equate Section 112 reformers with a pro-Thaksin agenda, since a number of the academics supporting such a reform have been openly and directly critical in relation to Thaksin. The intention of these reformers transcends the current red-yellow paradigm, and attempts to contribute towards supporting ongoing reforms of the monarchy. This is in order to facilitate the transition of the institution into the 21st century, at a time when information is proliferating everywhere. It is becoming increasingly unworkable to hold onto the notion of being able to manage human expression under the provisions of Section 112 and the 2007 Computer Crimes Act. And this, accordingly, is no longer such a realistic option. This point they are reaching is the fork in the road.

In arguing that the amendment of Section 112 will inevitably lead to the destruction and removal of the monarchy; anti-amendment groups are acting to further slow the process of democratisation within Thailand. The proposed amendment to this law is not conceived with the intention of giving licence for anyone to set out to offend the monarchy. Rather, it will attempt to provide enough breathing space within the discourse for a full and proper dialogue relating to the role of the monarchy. As Head of State, our revered King is well loved and respected by his subjects and, to a great extent, the monarchy remains relevant regardless of lese majeste.

His Majesty and the institution of the monarchy have already somewhat evolved their position towards that of a "practical monarchy". In the context of Thai public perception with regard to previous monarchs, where kings did represent the people, this feeling lives on today, resulting in most of the mainstream support for maintaining Section 112. By promoting rural development, His Majesty has formed a profound connection with the people of Thailand. This has helped to ensure that the institution of the monarchy has remained relevant for Thailand into the 21st century. A continuation in this regard is, for the monarchy, a more effective way of upholding the institution than is any attempt to maintain Section 112.

As stated by Amartya Sen, a Nobel laureate in Economics: "A country does not have to be deemed fit for democracy; rather, it has to become fit through democracy. This is indeed a momentous change, extending the potential reach of democracy to cover billions of people, with their varying histories and cultures and disparate levels of affluence." If Thais are to come to believe wholeheartedly in the idea of democracy, then this inevitably demands that we become more fully committed to the reforms, which are necessary to encourage the vitality of the process of democratisation. This leave us with the question as to whether we want to support the role of the monarchy in staying relevant and integral to the country, through the steadfast promotion of freedom of speech and expression. Or do we allow an over-emphasis on tradition and the cultural conditioning to impede the process of reform, and in doing so, enable vested interests to exploit the institution of the monarchy?

Currently, the rhetoric of "being Thai" includes statements such as: "We have to protect the institution of the monarchy. If you are not doing so, then you betray your motherland, and you should now leave the country." This sends out a rather strong message about the refusal of some to accept the kinds of differences that are necessarily accommodated within a mature democracy. This kind of rhetoric can then act to mobilise support amongst the more conservative groups, and blur the line in the debate for and against Section 112, whilst further fragmenting Thai society in the process.

As no tangible evidence has yet to be provided suggesting that the leading proposals to amend Section 112 are intended, in some way, to bring down the institution of the monarchy, or to weaken it by drawing it into day-to-day politics; it would be far more productive to remain with the issues, which require a proper debate. When there are genuine disagreements to be had over an issue such as lese majeste, then the focus is not lost. Otherwise the arguments may descend into a feeding frenzy of accusations and distortions, which can only reinforce a sense of alienation and division within Thai society. This is the point that Thais must understand, whether or not this lesson is learned sooner rather than later.