Defining 'fake' before it kills
Opinion

Defining 'fake' before it kills

Tolomeo Almonacin is suffering from prostate cancer. His fever symptoms did not die down in spite of having medication prescribed by the hospital. The doctor later found out the medicine was fake. The video then cut to a shot of police searching pharmacies as part of a process to stamp out the counterfeit drugs trade in Peru. 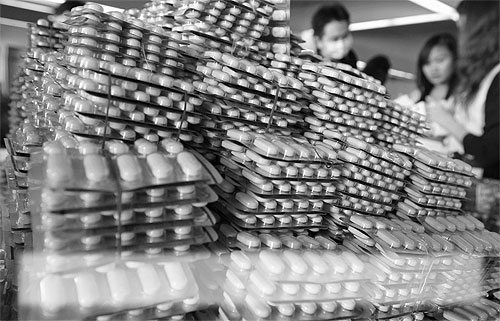 The five-minute video produced by the World Intellectual Property Organisation (WIPO) concludes that more than 25% of medicines sold in developing countries are counterfeit and more than half of medicines available on the internet are fake. The agency emphasised that thousands die every year due to counterfeit medicines. Patients are convinced they are undergoing treatment when in reality they are taking fake drugs.

Tolomeo's story became a viral hit on YouTube _ a direct message to the global community that the impact of counterfeit drugs on health could be great and that each country, particularly developing nations, should seek effective ways to stamp out the crime and health-related problem.

With the slogan "Counterfeit Medicines Can Kill," the video was also presented at a workshop on the dangers of counterfeit goods on public health recently organised in the Philippines.

So experts and authorities from Southeast Asian countries and beyond have joined forces to raise awareness of this issue in a region full of diversity.

In a bid to solve this crime and health-related problem in the region, intellectual property rights (IP) was the main focus of the WIPO-organised workshop. It was seen as an effective mechanism for the government to safeguard public health from counterfeit and pirated drugs. The government's role on IP protection could also make quality drugs affordable and accessible to the public.

The total global economic value of counterfeit and pirated products is as high as US$650 billion, based on the 2008 data of the International Chamber of Commerce. The agency also projected that piracy as a whole could cause global economic and social losses amounting to $1.7 trillion by 2015 and put 2.5 million legitimate jobs at risk each year.

Although counterfeiting and piracy is seen as a threat to the economy, it still remains ambiguous how the global community will come up with an agreeable definition of the terms and strike a balance between protection of intellectual property rights _ a stance held by rich developed nations _ and the universal right of access to affordable, quality medicines, particularly in the developing world.

The thing is, the term "counterfeit" has not yet been clearly defined by the World Health Organisation, which plays a large role in the prevention and control of medicinal products. Many develping countries have expressed misgivings over the WHO's role in "counterfeits", the use of which, in the dual context of intellectual property rights and health, could result in undermining the production and availability of affordable generic medicines.

An intergovernmental working group on sub-standard, spurious, falsely-labelled, falsified and counterfeit medicinal products was therefore established by the World Health Assembly in 2010, in a bid to resolve the differences. The consideration process is still ongoing.

In Thailand, the term "counterfeiting" in the Drug Act covers any medicinal products which fail to meet the standard amount by over 20% and/or have not been registered with the Food and Drug Administration (FDA).

With a mission to monitor and control the quality and safety of medicinal and food products, FDA secretary-general Pipat Yingseree said counterfeit drugs in terms of content are hardly found in the hospitals nowadays, due to the systematic and stringent drug purchasing system which supplies national health schemes.

The FDA secretary-general, however, conceded that the unclear definition could more or less prevent domestic competition since the producers could accuse local generic manufacturers of breaching patent laws and seek a court order to prevent any such production.

The Patent Act's incorporation of regulations pertaining to intellectual property rights on health and medicinal products has resulted in an "evergreen patent" for medical inventors. Patent holders can now extend a patent's duration by declaring new chemical substances or minor modifications to the original drug. Consequently, new generic drugs will be absent from the market due to the monopoly of original drugs, according to Usawadee Maleewong, head researcher on the "impact of Asean harmonisation on pharmaceuticals".

"Evergreen patent is a strategy widely used by multinational pharmaceutical companies to retain profits from popular drugs for as long as possible. The drug market is dominated by only a few patent holders and this has forced Thais to buy expensive drugs," she said.

While differences in defining "counterfeit" in the context of IP rights and health in the global community have yet to be settled, the Department of Intellectual Property (DIP) overseeing IP rights violations (including health and medical products), is already pressing ahead with its plan to stamp out counterfeit drugs.

Cases of trademark and IP violations rose from six in 2010 to 43 in 2011. The majority of the seized medicinal products were mostly being sold on the internet, e.g. counterfeit Viagra, cancer-fighting drugs and lifestyle medicines, said DIP chief Pajichima Thanasanti.

Such seizures helped safeguard people from fake drugs (which are being widely advertised online nowadays) since these medicines were not registered with the FDA and could be harmful to health.

Nevertheless, both the FDA and DIP should keep in mind that the grey area between patent rules and medicine production could hurt the public's right of access to life-saving medicines, especially in developing nations, said Niyada Kiatyingungsulee, manager of Thai Drug Watch. The academic at Chulalongkorn University's Faculty of Pharmaceutical Sciences cited the case of anti-Aids drugs confiscated in the Netherlands in 2008 while being shipped from a generic producer in India to HIV-positive patients in Nigeria, as an example of the difference between rich and poor nations in defining the term "counterfeit", and how such unresolved IP issues resulted in the poor being blocked from accessing life-saving medicines.

In the above case, over 49-kg of generic drugs were seized on the grounds that they contained materials which infringed on European Union laws pertaining to intellectual property rights. But the lives of people in developing countries where cheaper medicines are often sought, were put at risk.

While protectionism and the attempt to include medicinal products under broader measures are on the rise as superpower nations battle an economic downturn, policymakers and involved authorities in Thailand (which is listed among the low and middle income countries) must carefully deal with this sensitive issue, in order to protect not only economic but also public health security.

"We do not entirely oppose patent rules. But it is impossible for any country to rely only on imported original drugs. When the companies reap all the profits from the patent system, they should let generic drugs and medicinal access to grow following the usual market competition system. So people in developing countries will be able to afford more life-saving drugs and their lives will not be put at risk of substandard counterfeit medicines," she said.