A Myanmar I thought I would never see
Opinion

A Myanmar I thought I would never see

It is not often that you get the chance to be part of a moment that is genuinely historic. But, after more than 20 years of working on human rights in Myanmar, I truly never believed I would get to sit in Oslo and personally witness Aung San Suu Kyi receiving her Nobel Peace Prize. 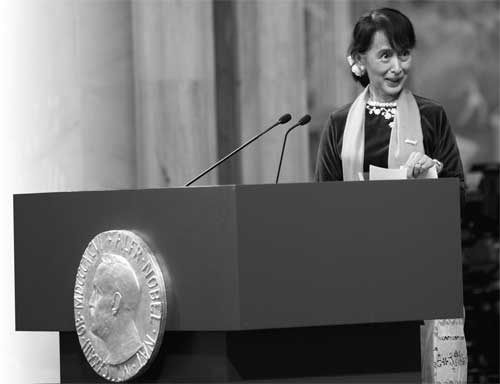 This moment is a true embodiment of the changes that are happening in Myanmar which were hard to imagine when I opened Amnesty International's file on the newly jailed prisoner of conscience, Aung San Suu Kyi, in July 1989.

When I was previously in the country, nine years ago, my time was limited to tacking from prison to government building and back again, talking only to government officials or interviewing 35 political prisoners in three jails.

This was in stark contrast to my return to Myanmar this year where I found a surprisingly new sense of normality.

I was able to meet many more people, including released prisoners who had returned to "civilian" life as journalists, doctors, writers and politicians.

One friend _ a former prisoner of conscience whose case I'd also opened 23 years ago _ and I were able to enjoy the novel experience of conversing freely.

Progress? Yes. But let's not be fooled by the excitement of the moment of seeing Mrs Suu Kyi travelling freely around Europe that the problems and challenges for Myanmar are over.

Some of the more recently released prisoners of conscience are trying to help those who are still behind bars. Others are deploying their skills and experience to work for environmental protection and land rights for farmers.

But at least everyone seemed happy to talk. It was normal; normal people doing normal things.

On the road to Nay Pyi Taw, the new capital, we stopped at a halfway point at one of a string of road houses, in the middle of farmland, with buffalo wandering across the highway and farmers returning from their fields.

As we watched TV in that idle way of travellers, I saw images of Mrs Suu Kyi campaigning alongside the logo of the DVB _ the exiled media group, Democratic Voice of Burma. That is one thing I never thought I would witness.

There was a feeling of optimism for human rights as we saw people increasingly standing up for themselves, whether through farmers' protests, demonstrations against lack of electricity or strikes among factory workers around Yangon, Myanmar's largest city.

But, as one businesswoman told me: "Now comes the hard part." She's right, of course.

Hundreds of political prisoners are still behind bars, the war in ethnic minority Kachin areas is entering its second year, and ceasefires with other ethnic armed groups are in their fragile infancy.

There is much debate about how many political prisoners are still detained and the government has a responsibility to release immediately all who are imprisoned solely for peaceful activities.

The fallout from ethnic conflicts remains _ where ceasefires have been brokered successfully between the army and armed groups, the humanitarian needs of those displaced by fighting must be addressed.

Meanwhile, the ceasefire between the Myanmar army and the armed group Kachin Independence Organisation has broken down.

Fighting resumed in June 2011 with Kachin civilians forced to porter for the army, being killed by indiscriminate shelling and having food and property destroyed. Tens of thousands of civilians have been displaced in the year that this conflict has raged.

Sectarian violence also broke out earlier this month in Rakhine State between the Buddhist Rakhine ethnic minority and the Rohingya Muslim minority. The Rohingya are another group whose rights are not being respected. They have faced widespread repression and discrimination at the hands of the Myanmar authorities for decades, including forced labour, land confiscation and severe restrictions on travel and marriage.

They have also been rendered effectively stateless under the 1982 Citizenship Law. An unknown number of people have been killed in Myanmar's western state and houses and businesses have been burned down.

The reform process is a delicate balance in Myanmar. Amnesty International is encouraging the government to implement what changes can be made immediately: releasing all prisoners of conscience, stopping abuses against Kachin civilians during the ongoing counter-insurgency operation, and protecting both the Rohingya and Rakhine ethnic minorities in Rakhine State.

Other changes will take more time, including legal and judicial reform. The international community should provide assistance in making these reforms, while at the same time continue to speak out against ongoing human rights abuses.

One thing that hasn't changed in Myanmar is the extraordinary courage and resourcefulness of the Myanmar people. There is much to do but equally, as Mrs Suu Kyui's presence in Europe proves, much to be hopeful for.

Donna Jean Guest is deputy director for the Asia Pacific Region at Amnesty International. She has covered the human rights situation in Myanmar since 1989 and has worked on Aung San Suu Kyui's case since before she was imprisoned in 1989.