After years of charges from a variety of sources that the GT200 bomb detectors government agencies began purchasing in the hundreds in 2008 are ineffective and overpriced, a Department of Special Investigation probe has come to the same conclusion. 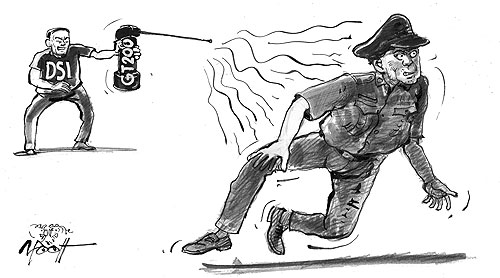 On Thursday  DSI director-general Tarit Pengdith said an investigation by his department had gathered enough evidence to take legal action against the manufacturers and distributors of the allegedly defective bomb detectors. Mr Tarit said that all 13 state agencies that bought the devices may have been duped and urged them to lodge complaints with the DSI so that legal action can be taken against the foreign manufacturers and their local distributors. He added that if the state agencies were not willing to do so the DSI would. Mr Tarit should be commended for taking this stand independently, but it is telling that the focus of the investigation stopped short of the government agencies that bought the devices, despite the DSI's conclusion that bidding contests to select the suppliers might also have been rigged.

Speculation that corruption and kickbacks were involved in the purchases has been rampant for some time, but no evidence of this has emerged to date. On the other hand, evidence of the ineffectiveness of the GT200 and the closely related ADE651, both of which have been used widely around the world, has been mounting for some time. As it stands now it now seems unlikely there will be an official inquiry into the purchase of the GT200 detectors, but at the least their use should be discontinued.

The devices were first bought by the Royal Thai Air Force in 2006 to detect explosives and drugs at airports. The army followed suit the same year and eventually bought 757 GT200 detectors at a cost of between 900,000 and 1.2 million baht apiece. In total, Thai government agencies spent close to one billion baht on the GT200.

A 2010 CNN article states that both the ADE651 and the GT200 ''use technology that some scientists have dismissed as little more than a car antenna mounted on a plastic box that is designed to act much the way a dowsing rod is used to find water'', and quotes an explosives engineer as saying ''I can see no mechanism of a detecting nature whatsoever.''

Problems with the ADE651 first came to light in November 2009 when it was reported in the New York Times that they were ineffective in detecting car bombs in Iraq, which were increasing in frequency at the time. In January 2010, the UK government banned the export of GT200 and ADE651 to Iraq and Afghanistan, warning that they were ''wholly ineffective'' at detecting bombs and explosives. About a month later then prime minister Abhisit Vejjajiva announced that the GT200 had failed rigorous tests carried out by scientists and the army in Thailand. ''We've done a double-blind test where the equipment was only successful in discovering [explosives] in 20% of the cases, when just a random choice would give you 25% _ so there's no statistical significance to having the equipment,'' said Mr Abhisit.

Yet there was no ban on the use of the devices. Most agencies, including the Office of the Narcotics Control Board, have stopped using them, but the army has not. In fact last week army commander Prayuth Chan-ocha said soldiers were confident of the effectiveness of the equipment because it produced good results in the field, in contrast to the results of scientific tests conducted by the DSI's National Electronics and Computer Technology Centre and others.

Defence Minister Sukumpol Suwanatat also insists the bomb detectors are effective and asks, ''If we don't use the GT200 what other detectors will we use?'' There are several good answers to his question. The first has four legs. The US security insider's magazine National Defense ran an article in 2010 which said the American military's success rate for locating improvised explosives planted in Afghanistan and Iraq was about 50% using their standard detection devices, which we can assume did not include the GT200. But that jumped to 80% when patrols took dogs along. The article quoted Lt Gen Michael Oates, commander of the Joint Improvised Explosive Device Defeat Organisation, as saying, ''Dogs are the best detectors.''

Secondly, there are electronic devices which have proved somewhat effective, including some the army recently ordered. Finally, if the GT200 devices are as ineffective as tests indicate, it would be better to use nothing at all rather than build up a false and deadly trust among those using them.