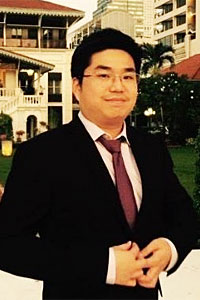 Business delegations, state visits and investors are descending on the former pariah state searching for new opportunities in Myanmar's blue ocean of industries. However, experts consistently caution that the country's basic infrastructure is simply insufficient to absorb foreign direct investment.

Myanmar President Thein Sein visits Laem Chabaeng deep-sea port in Chon Buri last month. Foreign companies are lining up to invest in the former pariah state, but the government there should try not to rush reforms in its zeal to turn around its economy.

Rudimentary financial and political institutions are being built: civil servants are learning parliamentary procedures, while economists are being trained to manage the economy as Myanmar begins its modernisation journey. It has political will and natural endowments to make this successful, but it would be remiss to overlook its highly capable and capital-rich Asean neighbours that have vast experience in economic development.

Myanmar already has enduring ties with members of the Association of Southeast Asian Nations and now is the time to deepen those relationships to help build institutional capacity and reap the benefits of foreign investment. Conversely, further integration by Asean will also bring strategic benefits as Nay Pyi Taw tries to hedge its relationship with Beijing.

There is, however, some uncertainty from Myanmar's nascent industries, businesses and small- and medium-enterprises. Firms are averse to competition that will be ushered in under the Asean Economic Community in 2015. For example, senior officials have indicated that Myanmar wants to develop an agribusiness industry and is not in a hurry to industrialise; however, fear of cheap agricultural products from Thailand could marginalise the domestic industry. These are legitimate concerns, but examination of the AEC will show that beggar-thy-neighbour policies are far from the spirit of Asean.

While many countries had trade embargoes against Myanmar, Asean member states did not ostracise Nay Pyi Taw. Likewise, the AEC will continue to be inclusive and ensure equitable economic growth. The AEC blueprint, since its inception, has taken into consideration the needs of Asean's lesser developed members and provides provisions in an "Asean-X" framework that allows Cambodia, Laos, Myanmar and Vietnam to liberalise at a pace that would not interfere with development.

Myanmar should look to its Asean neighbours and the Asean Secretariat as collaborators in policy formulation and basic infrastructure development. The Asean-5 _ Malaysia, Indonesia, the Philippines, Singapore and Thailand _ share similar histories of attracting and managing FDI for long term growth. Take for example Thailand's development of of its 140-kilometre eastern seaboard _ the infrastructure between Bangkok and Rayong that enabled a robust manufacturing base of Japanese autos and eventually the core the nation's export industry. Or Malaysia's ability to attract Intel's first overseas offices, and later AMD, Motorola, and Bosch in the Bayan Lepas Free Industrial Zone in Penang. Or the transformation of a sleepy harbour city of Batam, Indonesia, into a business and industrial centre. There is a vast pool of knowledge and experience in building industries that is not beyond the reach of Nay Pyi Taw.

To some extent, collaboration has already taken place in the form of Track 1.5 diplomatic engagements. Track 1.5 refers to a process that convenes members of government, civil societies, scholars and businesses in semi-formal capacities to discuss pertinent issues. Within these forums, an investor could raise a policy issue in a specific industry that officials can take into consideration, study and rectify. Myanmar can increase cooperation with former bureaucrats to assist with macroeconomic and monetary policy design.

In building basic industries, cooperation with seasoned businesses can accelerate the process. This, too, has already materialised in a partnership to establish a special economic zone in the future port city of Dawei with the Italian-Thai Development Plc construction company.

The Thai hospital group Dusit Medical Services plans to invest in Myanmar, which would help address the country's dire need for quality medical services. There is also discussion between the central bank of Myanmar with Malaysia's top two banks, Maybank and CIMB Group, to improve financial services. Another area of massive potential is the tourism industry of which "Amazing Thailand", "Malaysia Truly Asia" and "Wonderful Indonesia" have a wealth of knowledge in attracting visitors. An array of other industries and policy areas such as plantations, public health, telecommunications, project tendering, agribusiness and education all have ingenious Asean expertise.

The opening of Myanmar comes at a time of western lethargy, but considerable upswing in Southeast Asia. Indonesia recently pledged a US$1bn (31.5 billion baht) loan to the International Monetary Fund, while Malaysia's government-linked energy Petronas is making a $5 billion acquisition in Canada, and Thailand's CP Group is looking to make deals with US-based Smithfield Foods and the French retailer, Carrefour. If Asean companies are ready to export their capabilities to the West, surely, Myanmar stands to gain technology transfer and best practices through regional partnerships. It does not need to rush reforms its economy is not ready for; the investors are not going anywhere. Patience, consultation and building trust should be priorities.

Chayut Setboonsarng is an analyst at the CIMB Asean Research Institute. He can be reached at chayut@cariasean.org