'Insanity is doing the same thing over and over again but expecting different results." 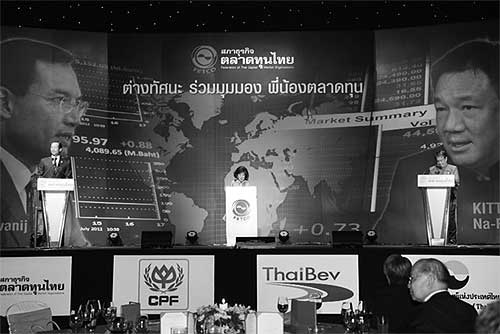 Former finance minister Korn Chatikavanij, left, and Deputy Prime Minister and Finance Minister Kittiratt Na-Ranong, right, on the same stage during a debate in a forum held by the Federation of Thai Capital Market Organisations on Aug 8.

We are not sure if Albert Einstein really made the above insightful quote, but even if he did not, it would still be an appropriate analogy to the government's approach to some highly damaging policies.

The recent budget debate, as well as my own recent debate with Deputy Prime Minister Kittiratt Na-Ranong a week prior, worries me greatly. If the populism that helped win last year's elections for the Pheu Thai Party was not damaging enough, the path the government is pig-headedly taking into its second year could cause lasting damage to our country.

What I have in mind are the government's policies to continue with the rice-pledging scheme, continue to borrow unheard of amounts "off-budget", seek to undo the monetary policy of the Bank of Thailand (BoT) that has served us well since the calamities of the 1997 crisis, and destroy the credit culture of the rural grass roots.

There are others, but these four alone, if not reversed, will set us back years of progress and perhaps even bring us to another crisis by the time of the next elections.

The rice pledge scheme has come under heavy scrutiny of late, and the Democrat Party challenged the initial premise of this policy since before the elections. Pheu Thai's contention was that by buying-up all the rice in the country, they could somehow force world prices to rise to the government purchase price. This was fundamentally flawed from the start and the current gap of about 9,000 baht per tonne of milled rice is stark evidence of this. It is thus no surprise that our exports of rice have fallen by almost 50% this year so far and the government is sitting on a loss of close to 100 billion baht to date.

Moreover, academics have calculated that a mere third of the project funds have reached the hands of the farmers, who are the intended recipients. The loss is also not prudently fiscalised, since it remains as an expense for the operating agency, the Bank of Agriculture and Co-operatives (BAAC). To make matters worse, the scheme is quickly eroding the quality of Thai rice, since farmers receive the same price from the government regardless of quality. Our competitive advantage was never in our efficiency of production, but in our quality. This threatens to no longer be the case.

Our second biggest fear is the impact of the government's borrowing habits. We agree with the need to invest in key infrastructure, and even have no objections to the need to borrow to do so. However, the prudent (and constitutional) way to do this is through the budget process. This is important because only through this process can there be transparency, scrutiny and disbursement discipline. Moreover, every budget since the 1997 financial crisis has been bound by the Public Debt Act which limits the level of budget deficit allowed each year. This is the fundamental reason why we have fiscal strength today and why confidence in our economy has not been challenged even amid some of the worst global economic crises, not to mention historic levels of domestic political instability.

At this point, I should mention that the Democrat-led government also borrowed off-budget in 2010 through the Thai Khem Kaeng policy, but that was because the economic crisis and subsequent collapse in government revenues meant that our budgetary debt ceiling was reached. In short, the only way which we could inject sufficient funds to revive the economy was to borrow off-budget. It is worth noting also that we had asked for an initial amount of 800 billion baht but cancelled half of that once the economy had begun to recover.

This government, however, has chosen to borrow off-budget even when fiscal space remained within the budget. Earlier this year the government pushed through an emergency decree to borrow 350 billion baht to invest in flood-prevention infrastructure. They claimed this money was necessary "immediately" in order to prevent floods from recurring this year. This was cynical opportunism at its worst. We knew that the government was not ready to spend the money, and challenged the legality of the decree with the Constitutional Court. Government MP's even threatened to blame the court for any floods is year if the bill was blocked.

Now that the rainy season is upon us, the truth has become apparent.

The finance minister revealed in parliament last week that a mere 700 million baht out of 350 billion baht has been spent. The terms of reference with project details has not been drafted, indeed, the projects have not even been identified. In a recent seminar I attended, senior civil servants responsible for the project called use of this fund a "long-term project" unlikely to even start for at least another year.

To make matters worse, we had just completed the 2013 budget last Friday. The government could have borrowed almost the entire amount for flood prevention in the budget, and even then probably would not be able to spend it all within the fiscal year. That they did not was largely because they know very well that with the lack of details they have on hand, they would never have survived the budget scrutiny process.

And that is not all. Because the government is borrowing this amount of money off budget, and because they had claimed that they needed the money immediately, they had legally pledged to borrow the total amount by the end of June 2013. Since they will not be in a position to use this money by then, they either need to let the law lapse and lose the right to borrow, or they will borrow the entire amount, thus incurring interest costs to the taxpayers of 12 billion baht a year.

If this is not insane enough, they are now talking about doing the same thing again this year, but this time with a law that would allow them to borrow 2 trillion baht.

The lack of transparency in this process is all the more worrisome given a recent poll conducted by the Thai Chamber of Commerce which showed that more than 80% of surveyed companies acknowledge that under-the-table payments are needed to secure government contracts, and that the price has gone up to as high as 35% of project costs.

Our third concern relates to the government's agenda to dictate how the BoT should conduct its business. As an ex-finance minister, I would be the last person to claim that central bankers are faultless in doing their jobs. However, I think it is fair to say that the governance structure imposed since the calamities of the mid-1990s, as well as the bank's general performance since, has made the central bank an important bedrock of our economy's strength.

Confidence in our central bank among the international community is also very high. Amid this, the transparent inflation targeting policy introduced by ex-BoT governor MR Chatumongkkol Sonakul has enabled the Thai economy to grow with lower rates of inflation than most of our peers, leading to confidence that has lead to a record build-up of our foreign reserves.

The government's stated desire to move to "exchange rate" management is unnecessary and dangerous. Singapore uses this policy, but then exports represent more than 200% of its gross domestic product, compared to about 70% for Thailand. Bear in mind also that management of exchange rates implies active use of foreign reserves and the risk of tempting speculators to move against our position.

The government economic guru, Virabongsa Ramagula, has said that the system needs change because it is "out of date". How so? if anything, going back to a system that directly led to the 1997 crisis is distinctly more out of sync with current conditions.

My last concern has directly to do with the people and specifically their money issues. This government displays a complete lack of genuine concern for the financial wellbeing of the grass roots.

The "debt relief" scheme imposed on the BAAC will hurt both borrowers and the bank. For the latter, the government policy is costing the bank close to 10 billion baht in interest income per year. For the borrowers, however, instead of reducing their debt steadily over the next three years, the scheme will have effectively meant that an extra three years of interest burden will have been paid without the principal having been reduced. Worse, the government is providing "debt relief" to good creditors rather than the much harder, and more necessary relief to informal debtors. This illustrates that it does not understand its priorities. Credit culture is being destroyed, taxpayers' money wasted, and those most in need of government assistance ignored.

What would we suggest the government do? First, it should scrap the rice-pledging scheme. Farmers still need income assistance, so the government should revert back to the proven income guarantee scheme. For sure, there is room for improvement in the way the scheme was run by the previous government, and we would welcome improvement to the scheme by Pheu Thai. Specifically, we still had some issues with ensuring that farmers were able to achieve the stated market price.

On the issue of fiscal prudence, the government should go back to borrowing from the budget only. Increase the deficit if necessary, but be ready to stand up for scrutiny through the budget process and not risk being in contravention of the constitution by going off-budget excessively.

The government should meet with _ and challenge the thinking of _ the BoT on a regular basis. However, the government also needs to acknowledge the importance of defending its independence. In this, both perception and reality are important. The all too public verbal spats between the government's economic team and the central bank has been very damaging to confidence and adds unnecessary uncertainty to the economy.

Finally, the government needs to remember that it has been given a historic mandate. Because of their majority, they have huge room to manoeuvre, which means they are uniquely able to do the right thing, rather than just what is politically popular. The first year has been wasted largely because the government has remained in "red shirt" mode, and party dynamics have meant that ministers have been working to please Thaksin Shinawatra rather than doing right for the country. Specifically on grass roots debt, the template on how to help those indebted to loan sharks already exists. Learn from the previous government's success and mistakes but most of all, do not insanely repeat the mistakes of the past. The damage caused in the first year was enough. To repeat the mistakes would be unforgivable.