Although former Democrat leader Bhichai Rattakul retired from active politics decades ago, he was frustrated by the colour-coded political impasse of the last few years and tried to do something about it - but his own party blocked his efforts.

Mr Bhichai came under heavy fire from the party's own supporters when he criticised the party over an unruly incident involving Democrat MPs in the House of Representatives on May 30. He made the comments during an interview with Voice TV, a pro-Thaksin cable television channel.

During a heated debate in the House on the controversial reconciliation bills, about a dozen Democrat MPs rushed toward House Speaker Somsak Kiatsuranond, surrounded him and loudly accused the PheuThai MP of being biased toward the government. At the height of the confusion, Democrat MP Rangsima Rodrasamee seized the speaker’s chair from Mr Somsak.

In the interview, Mr Bhichai criticised the Democrats’ conduct and demanded that they make an apology. Shortly after the interview was broadcast and posted on the social media, the savage criticism began. He was accused of having been bought by former prime minister Thaksin Shinawatra, of betraying the party and of being a chameleon.

The retired veteran politican appears unperturbed by the offensive remarks of his critics. During an interview with Matichon newspaper last week he talked calmy about how he felt about the Democrat Party and its leader, Abhisit Vejjjajiva, and his unrealised plan to bring about national reconciliation. 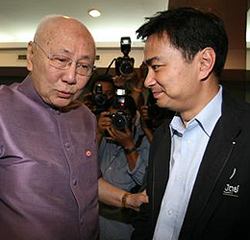 Mr Bhichai said Mr Abhisit was the right choice as party leader because he is a man of principle, honest and committed to his work. However, the current Democrat leader has one weak point – that is, he does not know how to make the best use of the people in the party.

Mr Bhichai recalled when he first joined the Democrat Party about five decades ago he was taught by then party leader Kuang Abhaiwong that a key factor in the success or failure of a party leader is how to make use of people – that is to bring out the different expertise and talents of individual party members, put them together and utilise them.

He said that Mr Abhisit not only does not know how to make best use of people, but also does not make use of the veteran politicians in the party.

Asked about his ideas for reconciliation, Mr Bhichai disclosed that he thought about it two years ago and had consulted a few "phuyai" about a plan to fly to Dubai to meet with convicted former prime minister Thaksin.

Then he elaborated on his plan, which he claimed Thaksin accepted, which was as follows: He would fly there to meet Thaksin and would convince him to accept the two-year jail term imposed by the Supreme Court’s Criminal Division for Holders of Political Positions and they would then both fly back to Thailand together.

Upon arrival in Thailand, they would travel together to Siriraj Hospital for an audience with HM the King, in Thaksin's capacity as a former prime minister, and seek a royal pardon. If an audience was not granted, Mr Bhichai would have promised to ask senior palace officials to accept a bouquet of flowers from Thaksin as well as his petition for a royal pardon.

After that, both would travel by car to Bang Kwang maximum-security prison. Mr Bhichai said he would have spent time in prison with Thaksin, but in another cell, until a royal pardon was granted. This was a guarantee to the ex-premier that his days in prison would be limited, not the full two years of the sentence imposed by the court.

He felt the deal was a win-win solution to Thailand’s protracted political conflict.

"Thaksin and his Pheu Thai party would be the heroes, as well as Mr Abhisit," said the former Democrat leader.

Mr Bhichai claimed that his terms were acceptable to Thaksin, but then-prime minister Abhisit objected, insisting that the conviction must stand.

In the Matichon interview, he made a final interesting remark which is worthy of attention.

"The Democrats have insisted that Khun Thaksin must face the two-year jail term without giving him a way out. In politics, there must be a way out; do not force someone into a corner because he will fight back fiercely. And the Democrats do not have a way out," he said.

Mr Bhichai will certainly be bombarded with even more heavy criticism for his candid interview about Mr Abhisit and about his plan to bring Thaksin home in order to resolve our ugly political conflict. Some might wonder why he chose to spill the beans now, and not much earlier.

Unfortunately, his plan has been overtaken by several events in the past two years, including the bloody red-shirt protests in Bangkok which led to the deaths of 92 people and the burning of certain parts of Bangkok. It is now history.

But as an after-thought, does Mr Bhichai’s plan sound pragmatic and logical? Is it true that there must be a way out in politics, otherwise we will be forever stuck in this dilemma?

Last but not least, I do not think Mr Bhichai is a changed man, a Thaksin admirer or a chameleon as alleged by his critics. He is, like so many of us, just sick to death of the endless political insanity and just wanted to help out -- by offering a way out, even if it didn't please everyone.