Are our drug policies really working?

Last month, the Royal Thai Police and the Office of the Narcotics Control Board (ONCB) announced that their war on drugs was a success. Referring to increased numbers of drug users arrested and rehabilitated, deputy national police chief Pol Gen Adul Saengsingkaew is quoted by the Bangkok Post (‘‘Govt war on drugs hailed a success’’, 17th Aug) as declaring ‘‘Regarding these statistics, the war on drugs now is going much better than it was under the previous government. Actually, it is even better than under the Thaksin Shinawatra administration which initiated this policy in 2001.’’

Drug prosecutions have risen by 8% in the last year, drug arrests by 14%, and methamphetamine pill seizures by 26% — but as many as 40% of drug injectors in Thailand are estimated to be HIV-positive. With this alarming statistic, it is clear the government needs to reassess the effectiveness of its war on drugs. 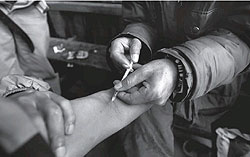 Drug prosecutions have risen by 8% in the last year, drug arrests by 14%, and methamphetamine pill seizures by 26% — but as many as 40% of drug injectors in Thailand are estimated to be HIV-positive. With this alarming statistic, it is clear the government needs to reassess the effectiveness of its war on drugs.

On Monday, the Ministry of Justice, alongside the Transnational Institute and the International Drug Policy Consortium, is holding a high-level meeting to review the country’s legal response to drug use. The latest government announcement raises, once again, a fundamental question: how to measure ‘‘success’’ when it comes to drug policies?

The results quoted by Thai officials — and by many governments around the world — focus on amounts of drugs seized and numbers of people arrested. These represent the immediate results of specific law enforcement actions, and are easy to measure — which is why they are bandied about freely by politicians and government agencies looking to justify the huge investments made in this area.

We believe however that governments should be looking instead at the true impact of these activities. For example, asking the question: have increased drug arrests actually succeeded in reducing the demand for drugs, or their supply? Has prohibition affected the availability, cost, or quality of drugs on street markets? Are state-sponsored drug rehabilitation programmes protecting people who use drugs from becoming infected with HIV, hepatitis or tuberculosis, or have prohibitionist policies actually increased the rates of infection and the health and social vulnerability of those people who use drugs?

This year, two reports from both the Global Commission on Drug Policy and the Global Commission on HIV and the Law highlighted the alarming rates of HIV infection amongst people who inject drugs in Thailand. Both Commissions point to Thailand’s strongly punitive approach toward drugs as a key driver of the HIV epidemic, as ‘‘HIV risk behaviour resulting from repressive drug control policies is the main issue driving the HIV epidemic in many regions of the world’’.

In the early years of the HIV epidemic Thailand earned widespread respect for the speed and pragmatism of its response to Aids: the number of new HIV infections fell from 143,000 in 1991 to 19,000 in 2003 through an intensive programme of condom distribution and by enrolling sex workers in prevention programmes respectful of their rights. But when it comes to HIV and drug use, the national response has failed and is now quoted as a leading example of how not to respond.
Although lessons have clearly been learned since the extrajudicial killing of thousands of drug users under the Thaksin administration, the criminalisation and mass detention of drug users continues unabated.

This policy drives vulnerable people away from health services and encourages even riskier behaviours. It undermines the excellent work being done by harm reduction services and civil society in the country.

Drug prosecutions have risen by 8% in the last year, drug arrests by 14%, and methamphetamine pill seizures by 26% — but as many as 40% of drug injectors in Thailand are estimated to be HIVpositive, and closer to 90% have hepatitis C. Less than 1% have access to sterile needles and only 3% have access to proven drug treatments such as opioid substitution therapy. We would therefore assert that Thailand’s war on drugs has been far from successful.

But the difference of opinion underlines the importance of having a proper framework by which to measure success — one which looks at outcomes, impacts and unintended consequences for the individuals involved as well as for the society as a whole. Thailand is by no means the only country where the war on drugs is hailed as a success without any proper assessment of the costs and benefits — this happens around the world. It has to stop.

There must come a time when the unintended, negative consequences of punitive drug policies come to the fore, and the case for more humane, healthfocused responses gets heard. In fact, this is already starting to happen in some parts of the world — particularly in Latin America, Europe and Australia.

Other Asian countries are also beginning to open up to this reality and are working hard to address HIV among people who use drugs. Malaysia has been notable in its efforts to scale up harm reduction programmes and voluntary drug dependence treatment. For Thailand to demonstrate the same leadership on HIV and drug use that it showed for HIV among sex workers, it needs to reassess its drug policy. It needs to place emphasis on the support of individuals and on public health, rather than on the punishment and demonisation of people who use drugs — and on the criminalisation of drug trafficking, not drug use. In their meeting on Monday, we urge the government agencies working on drug issues in Thailand to take these issues on board.