No plus for patients as EU deal trips
Opinion

No plus for patients as EU deal trips

Saturday, Dec 1, marked World Aids Day, a celebration of the achievements in combating this disease and a day to highlight the challenges that lay ahead if the world is finally to be rid of this deadly infection. 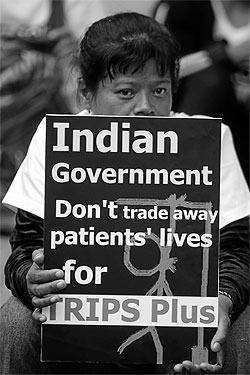 In past years, Thailand has often been praised for its progressive policies to address the HIV/Aids pandemic, including the promotion of universal access to anti-retroviral drugs.

It has also been recognised in the international public health arena as a country that had a progressive public health policy, and had a firm position against unfair trade rules affecting access to medicines.

Thailand was also applauded by the global community of people living with HIV/Aids and international agencies that work to combat HIV/Aids for its courage in enforcing the Agreement on Trade-Related Aspects of Intellectual Property Rights (Trips).

By making its people's health a priority over threatened trade sanctions, Thailand's actions in issuing a number of compulsory licences encouraged other developing countries, such as Brazil, India and Indonesia, to follow suit and make use of Trips' public health safeguards.

The compulsory licencing component of the Trips agreement effectively allows individuals or companies to use a patented drug without seeking the patent-holder's permission. Instead, they simply pay a set fee.

This has allowed for the proliferation of inexpensive generic-brand pharmaceuticals.

However, Thailand's recent position on the Thailand-European Union free trade negotiations is very worrying. It seems the Thai government is no longer willing to stand firm against accepting any and all Trips-plus provisions. Many of these provisions have much tougher patent law conditions than stated in Trips, and may adversely affect access to medicines.

In its rush to gain access to the European market for chicken and seafood, the Thai government has underestimated the massive impact on public health that such a weak negotiating position will bring.

One of the Trips-plus provisions being discussed in the Thai- EU free trade agreement is the introduction of "data exclusivity" into Thai law. Such a move provides a monopoly distinct from patent rights that often results in high prices and a delay in market entry of generics.

As a part of the US-Jordan free trade agreement, Jordan implemented data exclusivity. A study conducted by Oxfam in 2007 found that of the 103 medicines registered and launched since 2001 that had no patent protection in Jordan, at least 79% had no competition from a generic equivalent as a consequence of data exclusivity.

The study also found that prices of these medicines under data exclusivity were up to 800% higher than in neighbouring Egypt.

A 2010 CPath study determined that once Guatemala enacted data exclusivity, some medicine prices rose as much as 846% _ even though just a handful of medicines were under patent protection.

The government's negotiating team argue that if they take a strong position against Trips-plus, then the EU will walk away from the negotiating table. This is simply not true.

As we saw with the EU-India negotiations, the Indians stood firm on their "no Trips-plus" position and the European Union recently announced that intellectual property rights would be removed from negotiations.

We would therefore take this opportunity to request that the Thai government ensure that forthcoming negotiations with the European Union will not adversely affect the cost and access to medicines and medical technologies by stating clearly and firmly in the framework of negotiations that all Trips-plus demands be excluded.