If we're so happy, why am I so sad?
Opinion

If you are reading this it means that, hooray, the world didn't end yesterday! It also means that now, there won't be anything to watch on the documentary channels. Well, unless you like fishing and motorbikes. 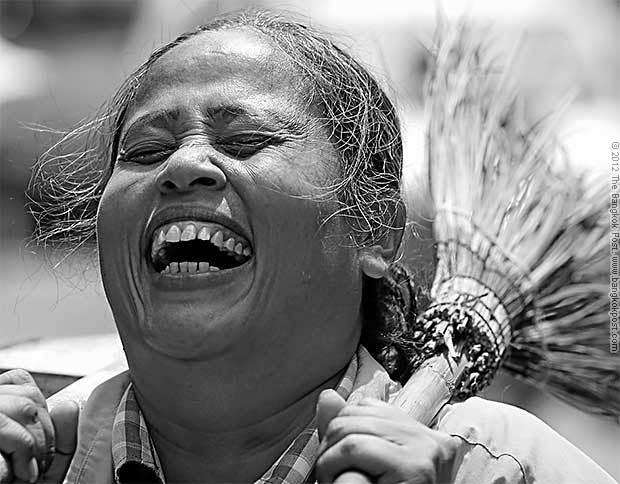 A smile from a road sweeper seems to back up two surveys which ranked Thailand as the eighth happiest country to live in and Bangkok as the sixth friendliest in the world. JETJARAS NA RANONG

Being alive isn't the only cause for celebration, at least if you live here in Thailand. Not one, but two recent polls have put the famed Land of Smiles on their lists of awesome places to live.

Thailand is now officially the eighth happiest place to live, while our capital is said to be the sixth friendliest city in the world.

The results of the surveys, carried out by Gallup and Tripadvisor, are certainly news to me. Personally I don't feel very happy, and I don't really have any friends, so I would like to know who the people that were surveyed are.

Of course, I am being facetious. I have loads of Facebook friends. But I truly am at a loss as to why we are consistently ranked so highly on these kinds of lists?

For tourists, Bangkok is notorious for the number of ways that you can get ripped off. Tuk-tuk drivers and their quick stops at jewellery stores, taxi drivers ''forgetting'' to turn on the meter, police fining tourists for breaking made-up laws, night markets selling shoddy goods, beautiful women turning out to be men in disguise; the list of scams that you can fall prey to in Bangkok is endless.

Admittedly Thais are quite friendly about the way they rip you off, but that's like a tiger asking you how your day was while it chews on your femur.

Perhaps Thais are simply the best of a bad bunch? After all, I consider myself quite well travelled and I don't think anywhere in the world has particularly friendly people.

What does friendly even mean? And why are Thais so good at coming across as friendly? Does our lack of confrontational skills make foreigners think we're just being nice? Because we're not.

If Thais were really into being nice, we wouldn't charge foreigners more for tourist attractions by writing dual prices in Thai. I don't know any other instance where we use Thai numerals other than when we're charging tourists more than locals and seeking to hide it.

Bangkok being labelled sixth friendliest city just proves that we Thais are good at tricking people. Thailand coming in eighth on Gallup's happiest countries list, however, proves we are good at lying to ourselves. And lying to yourself has far fewer benefits.

These are the questions that around 1,000 Thais were asked in order to gauge whether they were happy. Does learning something new make you happy? What if you learnt that Thai people are inherently prone to scamming you? Would that make you happy? And honestly, hands up, how many Thais learnt something new yesterday? Did you learn it in all the books you aren't reading? Or through all the lies that our politicians and big businesses tell us?

And what about feeling respected? Thailand is a country divided by politics and social class. Yellows don't respect reds. Thaksinites don't respect Abhisitians. The hi-so don't respect the working class. There is no respect.

So, again, I ask, how did Thailand rank so highly? Are we oblivious to what's going on around us? Our military is guilty of shooting a young boy, our deputy prime minister is allegedly involved in illegal animal smuggling, our leading companies fight over 3G! These things do not make me happy!

Looking at the other countries that populate the happiest places list, we can see many countries with a similar level of development to Thailand. For example, Panama, Paraguay and El Salvador make up the top three.

Is there a connection? I suspect the answer has more to do with people from developed nations feeling relatively less happy, whether because of a crippling sense of entitlement or because they are so rich and clever they can no longer be satisfied with normal life.

But Tokyo topped three of Tripadvisor's four categories (cleanest, safest streets, friendliest taxis), yet it doesn't have the happiest people. That Japan is the world's third largest economy, whereas Thailand, which is full of corruption (88 on the Corruption Perception Index 2012), is super happy, shows my argument makes sense.

Thankfully, these types of surveys are usually ignored by the general public, I do hope, however, that the powers that be do not exploit these results and use them as an excuse to refrain from addressing some of the serious issues that plague our country.

Dec 21, 2012 did not mark the end of the world and now we enter 2013 as a supposedly happy, friendly country. Our ''miracle year'' has now come and gone. Let's see if we can stop lying to ourselves and the rest of the world and make Thailand a country worthy of appearing on next year's lists.