Headed for a debt crisis?
Opinion

Headed for a debt crisis?

It is true that a certain level of public spending is necessary to perform essential government policies, but what if tax revenue is not able to cover those necessary government expenditures? 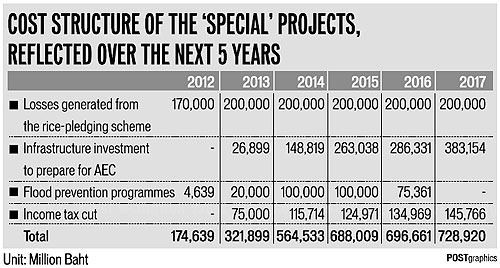 The obvious answer here is for the government to take on debt. Is this a bad thing? Absolutely not.

Public debt, if used properly and managed well, can be a fundamental tool to build an economy and a country. All the government needs to do is ensure their spending is properly targeted and that debt grows more slowly than tax revenue in the long-run.

Unfortunately, this may not be the case for Thailand.

The Thailand Development Research Institute (TDRI) has conducted a forecast on Thailand's public debt situation over the next five years, from 2013-2017. We have found that the level of public debt is most likely to rise over that time period, almost regardless of how fast the economy grows. The forecasted debt surge mostly resulted from the government's extravagant populist policies. Policies such as the rice-pledging scheme, subsidies for first-time car buyers and income tax cuts are likely to contribute to increasing public debt.

Shown in the table of the cost structure of the government's special projects over the next five years, it is predicted that if the economy grows by less than 6% per year the level of public debt is likely to reach and even surpass a shaky proportion of 60% of the country's national income (GDP) _ a level assumed to be safe by many.

For an average citizen with commonsense, this should sound worrisome.

It should also worry the government. If we look at this debt trend from a "risk management" basis, it certainly is worrisome. In risk management, one would evaluate both positive and negative outcomes that might occur, and do whatever is necessary to prepare for the worst.

So even if the economy grows by at least 6% annually over the next 10-15 years, the country's public debt-to-GDP ratio would begin to fall and stabilise (though this is certainly a big "if"), it is by no means a sure thing.

And what about the worst-case scenario?

The worst is when the economy grows by 4% or less per year while the government continues to spend according to its current plan without generating more future income to cover its enormous expenses. In that case, debt-to-GDP ratio would approach 80% quickly, and the country would surely lose its credit trustworthiness.

To prepare for the worst, the TDRI proposes that the government should do their best in raising its "fiscal space" by: 1) more intelligent investments; 2) more income generation; and 3) a reduction of unnecessary expenses.

Additionally, the government should continue to invest in various policies that develop our human and capital productivity. This is absolutely essential if Thailand is to avoid the middle income-trap. Labour productivity here still mirrors the productivity of poorly structured economies.

Secondly, in order to spend more, the government needs to collect more income, and should do so with sensible tax reform that would not only raise income but make society a better and more equitable place to live.

Those who earn higher incomes should pay higher taxes. The current tax system is not built that away due to many tax loopholes.

Thirdly, the government needs to cut back on some of its expensive populist policies, such as the costly rice-pledging scheme.

The TDRI estimates that curbing the loss to no more than 70,000 billion baht per year, instead of 200,000 billion currently, could easily add 5 per cent of debt/GDP to the fiscal space.

That level might prove necessary for the country to avoid a European-type public debt crisis that would drag the country down long term.

It is up to the politicians whether they want to do what is best for the country, or do simply what they feel will win them another election.