To err is human. But to err on the scale of the wrong predictions made for the Bangkok governor’s election by all but one of the major pollsters is not just an embarrassment, it's a disaster for their credibility.

Only the Nida Poll, run by the National Institute Development Administration, correctly predicted that former Bangkok governor MR Sukhumbhand Paribatra, the number 16 candidate from the Democrat Party, would be re-elected.

The pollster reported 43.16% of respondents said they would vote for him. Not that far off. He won almost 48% of the vote against almost 41% for Pol Gen Pongsapat Pongcharoen, the number 9 candidate from the Pheu Thai Party, with a 63% turnout.

The other opinion polls all predicted Pol Gen Pongsapat would win well. 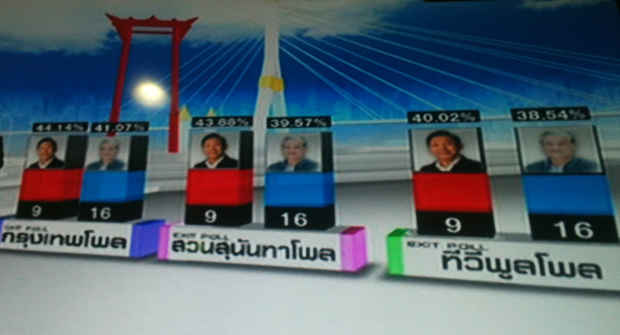 Are Bangkok voters notoriously unreliable, saying one thing to pollsters and then doing the opposite, as suggested by one of the pollsters in trying to excuse the blunder? It is possible that some of respondents might not have answered the opinion survey honestly, and others might have changed their minds later. But to put the entire blame on the poll respondents, the voters, for this shocking mistake is just too simplistic an excuse.

The totally erroneous election forecasts by most pollsters should be a lesson to them. They need to make a close self-examination to find out what went wrong – be it the methodology, the size of the sample, or the answers from the respondents, whatever – so that they do not make similar mistakes again.

The lousy performance of most of the polling institutes witnessed in the March 3 gubernatorial election has had a heavy impact on their credibility, to the extent that a few of them are pondering stopping publication of future election forecasts.

Unlike the previous Bangkok governor election, the March 3 election was not just a contest between the two political arch rivals, the Democrat and Pheu Thai parties, with the governor’s seat as the trophy, but a fight believed to have wider political ramifications.

For the Democrats it was a do-or-die contest they could not afford to lose if they have any hope of standing up to the Pheu Thai juggernaut in the next general election in their main political bastion, which is Bangkok.

For Pheu Thai, although Pongsapat failed to wrestle the governor’s seat from Sukhumbhand, it was not at all a complete defeat for the party. The party actually expanded its foothold in the city as evidenced by the large number of votes caste for its candidate compared to the results in previous governor elections. It was the first time a losing candidate polled more than one million votes.

Many Bangkok voters who are neither supporters of the Pheu Thai or Democrat parties may have cast their ballots for Sukhumbhand not because they were impressed by his performance, which has not been impressive, but because they did not want Pheu Thai or, to be more specific, former prime minister Thaksin Shinawatra, to dominate politics across the country, including Bangkok.

But this political mindset may change if Sukhumbhand does not change the way he ran the city in the past four years, which many people rate as below par. He must show results, and at least follow up on his election promises, be more pro-active and reach out to Bangkokians.

Failing that, there will be no third chance for the Democrats.

The fear of the "devil", as whipped up by social critic Sulak Sivaraksa’s message in the social media calling for a vote for the "lesser of the two evils", may not work its magic in future for those Bangkok voters who took his advice this time, on March 3.