Thailand has a long history of reconstructing heritage. But it has no history of conserving it. 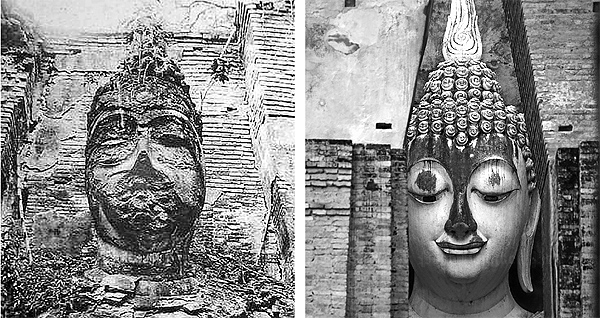 Phra Acana, the main Buddha image at Sri Chum temple in Sukhothai, before and after restoration. During his visit to the temple in 1901, Prince Naris noticed that the eyes on the image were set at different levels which indicated that at least four restorations had been undertaken in the past. But the Fine Arts Department restored the image with the aim of showing the unity of the Sukhothai style. LEFT PHOTO COURTESY OF PROF PIRIYA KRAIRIKSH; RIGHT PHOTO BY YINGYONG UN-ANONGRAK

If we take the Oxford English Dictionary's definition of conservation - "Preservation from destructive influences, natural decay and preservation of existing condition" - then Thailand has a poor record of doing that.

Thailand's history of heritage reconstruction can be divided into three periods.

- The first: the Buddhist period from the mid-7th to mid-19th century. The aim of Buddhist sects during the 7th century was to acquire merit through the making of Buddha images, building stupas and enlarging and modifying existing structures to suit sectarian specifications and prevalent tastes. These were all accepted practices.

Among the earliest examples of the Mahavihara tradition of pious heritage preservation was the restoration in the 1340s of the Maha That Luang at Sukhothai by Somdet Phra Mahathera Sri Sradharajulamani Pen Chao. He increased the height of the Great Relic Stupa from 177 metres to 190 metres, and had it stuccoed.

To welcome the new millennium of the Cula Sakarat Buddhist era, in 1638, Jeremias Van Vliet wrote that King Prasat Thong of Ayutthaya had "built, renewed and repaired more temples, towers and pyramids than any of his predecessors". Among the structures restored during this time was the prang (tower) of the Great Relic Stupa at Wat Mahathat, Ayutthaya, which had collapsed earlier.

Originally, the prang stood 19m high and the trident finial another 6m. As the king thought the original form was squat, he had the height of the tower increased to 44m, but retained the original finial.

Having founded Bangkok as his new capital in 1782, King Rama I in 1808 commanded that the large seated bronze Buddha at Sukhothai be brought to Bangkok for safekeeping and installed at the newly built Wihan Luang of Wat Suthat. However, since he noticed that the face and the hands were not in accordance with the Pali texts and commentaries, he had them corrected to meet contemporary interpretations.

It can be seen from the above examples that traditional methods of heritage preservation refers to restoration and reconstruction. It does not mean conservation or preservation of the original state of the monument.

- The second: the nationalist period, which lasted from the mid-19th to mid-20th century. As Siam joined the "civilised" nations during the reign of King Mongkut, nationalism took root as a state religion. For his part, the king had the Phra Pathom Cetiya at Nakhon Pathom rebuilt.

King Chulalongkorn who restored the Phra Prang of the Temple of Dawn, commanded that restoration work must rely on the original materials as much as possible. He wanted the restoration to look authentic and to follow the original designs.

In March 1911, one year after his ascension to the throne, King Vajiravudh founded the Department of Art and Crafts. He named it Krom Silpakorn, or the Fine Arts Department and turned into an archaeological department. But no actual conservation took place in his reign.

King Prachadhipok established the Royal Institute to oversee the Fine Arts Department, the Museum Department, and the Archaeological Department. Its task then was to preserve monuments _ not to restore them to their original state.

Three years after the absolute monarchy was overthrown in 1932, the Royal Institute was shorn of its responsibilities, but survived as a research centre for higher learning. The Fine Arts Department, which came under the jurisdiction of the Ministry of Education, took charge of archaeology, conservation, and museums.

- The Third: The development period from the mid-20th century to the present. During Field Marshal Phibun Songkhram's first administration (1938-1944), the government's attention was geared toward "nation building". Among the programmes of national development was a scheme to rehabilitate the island of Ayutthaya, the former capital which had been depopulated since 1767.

In 1940, Luang Pradit Manutham, who was then minister of finance, had the Provincial Hall constructed in the middle of the island accessible by a concrete bridge so as to bring people back into the former capital. Roads were built and land was parcelled out for sale. As a result of the government-sponsored development, 23 ancient monasteries disappeared.

Field Marshal Phibun's second administration (1948-1957) was more constructive in the area of conservation, spurred, no doubt, by the country becoming a member of Unesco in 1949. In that year alone, the Fine Arts Department restored ancient monuments in Nakhon Ratchasima, Phitsanulok, Chiang Mai, Chiang Saen, Lop Buri, Phetchaburi and Kanchanaburi as well as enclosing the Kroe Sae Mosque in Pattani with a fence.

In 1961, the Act on Ancient Monuments, Antiques, Art Objects and National Museums was promulgated with a clause that gave the Fine Arts Department freedom to do what it thought best.

In 1977, the department drew up a master plan to conserve and develop the environment of the historic monuments at Sukhothai as well as to "recreate the atmosphere of the historic city". Its intention was to restore the historical monuments and to revive the abandoned city. Thus, the Sukhothai Historical Park Development Project was born, a 10-year endeavour with a total budget of 202.6 million baht. It ushered in a period of development that involved archaeological research, land-use planning, community development, resettlement of people to make way for the historical park and associated infrastructure, and landscape improvement. It also included the revival of festivities mentioned in the Ram Khamhaeng inscription for the benefit of tourism.

In preparation for the Bangkok Bicentennial celebrations in 1982, the government under Gen Prem Tinsulanonda in 1978 appointed the Committee for the Conservation and Development of Krung Rattanakosin.

In 1981, the cabinet approved the committee's proposals as follows: to forbid the construction of new housing by the state as well as the private sector within the inner city; to restore any building built in the reign of King Chulalongkorn or earlier to its former state, or to demolish the building and reconstruct it following the same design as the original; to create open space and shady areas along the Chao Phraya River; and to allot land for traditional and cultural activities.

In 1985, the Fine Arts Department made amendments to the 1961 Act on Ancient Monuments so that it could have a freer hand to restore and develop. The so-called "Bangkok Charter" defines restoration as "the act of putting back to a former state" that contradicts internationally accepted conservation practice. The department explained that even though a restored monument could not be considered an original work of art, it would have a longer life span than one that had not been preserved and would best show how the original might have looked.

Also in 1991, the Committee for the Conservation and Development of Krung Rattanakosin successfully created the Rama III Plaza and Park by pulling down the Sala Chalermthai Theatre in order to give a vista of the Loha Prasat at Wat Ratchanadda, which was built in 1846. The destruction of the Sala Chalermthai Theatre was a travesty of conservation. The theatre should have been conserved to retain the integrity of Khun Chitrasen (Mew) Apaiwongs' grand Art Deco design of 1941 for Ratchadamnoen Avenue.

The success of the project to develop historical parks must have inspired the master plan for the conservation and development of Krung Rattanakosin, which received approval from the cabinet in 1997. This plan sought to open up views of historical monuments, to create more parks, to restore monuments, to create an identity for the inner city, recreating the atmosphere of inner Bangkok during the reign of King Chulalongkorn.

The row of Art Deco-style shop houses lining Ratchadamnoen Avenue, built during Field Marshal Phibun's nation-building programme, are under threat from the 2003 conservation and a project, known as the "Thai Champs Elysees".

To commemorate His Majesty's 80th birthday, in 2006 the Supreme Court president declared that the modernist Supreme Court building facing Sanam Luang would be replaced by a Thai-style construction at a cost of 3.7 billion baht.

The president argued that the historic building, which was built to celebrate Thailand's full judicial sovereignty, was dilapidated and could no longer be used even though it was only 23 years old.

From the preceding account of the historical reconstructions in Thailand, it cannot be denied that ours is a culture of reconstruction. For not only our monuments are reconstructed, but our perception of history is reconstructed as well.

For example, the likeness of Ram Khamhaeng is based on a 1912 hypothetic portrait of Phra Ruang who probably was as mythical a personage as King Ram Khamhaeng was.

In spite of contemporary records stating that the Cetiya Phukhao Thong, outside Ayutthaya, was constructed by King Naresuan to commemorate his victory over the Burmese crown prince, we insisted that an anonymous ruined stupa in Suphan Buri province was King Naresuan's commemorative stupa. Accordingly, we reconstructed a cetiya to him there.

Given the national propensity for make-believe, our endeavour to conserve heritage seems doomed before it begins. Yet it is not too late to realise that conservation is not reconstruction. We might begin by separating development from conservation.

Let conservation serve future scholarship not today's development. We might start by leaving ancient brick mounds alone and monuments untampered. We might erect signboards next to them with paintings, or models, of what we imagine the originals may have looked like.

We seriously have to tackle the destructive elements brought by greed and delusion in order to preserve existing conditions, which may not be ideal. But they are all that we have.

To conclude, conservation is a Western concept that has no roots in Thai culture. Similar to other Western concepts, like democracy. Thais imported it to give themselves a veneer of respectability. While paying lip service to conservation, they tried every trick to undermine its meaning and subjugate it to their tradition. Amazingly, they succeeded in turning conservation into the rationale for development. So in the name of conservation we destroy those that we wish to preserve. King Vajiravudh had expected it all. He wrote in 1923: "If we are forced to choose between progress or preservation of antiquities, it is normal to think of progress first."

In our country how many bricks from the buildings of Ayutthaya went into the making of railway embankments? My only hope is that there will not be too many occasions when we will have to barter antiquities for progress.

Ninety years later, his observation is more relevant than it was then. For the antiquities that remain for us to barter have almost gone. However, we still have the Phibun-era buildings waiting to be sacrificed on the altar of progress.