Before leaving for Bangkok, farmer Wai Pongphim, 60, told youngsters at home that his stay in the capital was likely to be a long one. Together with some 20 others from Ban Ta Mui in Ubon Ratchathani's Khong Chiam district, he was leaving to join other villagers from across the country in a rally at Government House. 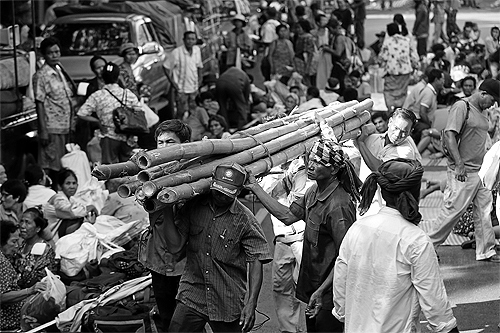 Members of the People’s Movement for a Just Society (Pmove) set up camp near Government House to call on the Yingluck Shinawatra government to help resolve their plight caused by top-down, environmentally destructive policies. PAWAT LAUPISARNTAKSIN

Mr Wai and friends travelled more than 700 kilometres to the seat of power to demand that authorities let them go back to the land they used to farm for generations, but which was in 1991 made part of Pha Taem National Park.

"It's getting harder to make a living nowadays," Mr Wai said. "Villagers are still being forced off their land while construction of resorts is increasing. There are plans to build dams on the Mekong River, which means there'll be less fish to catch.

"It is difficult for us to accept the development that takes away our simple way of life. All we want now is to have a piece of community land and the right to work on it."

Since Sunday night, some 3,000 people have descended on the capital. They came for various reasons.

Many came because they lost their land to state projects or powerful individuals with the help of unscrupulous officials. Som Khamnuan, 82, from Warin Chamrap district of Ubon Ratchathani, said he lost a 14-rai plot of land that his family had once farmed to a local "influential person".

Some came to complain about the impacts of environmentally harmful projects, such as mining and power plant operations. Some have been taken advantage of by major agribusinesses.

Others, like Hawa Kla-suek, 52, from Ban Chang Hae in Ranong's Muang district, are displaced Thais who want official recognition. Others still face jail time because they farmed public land that was long left unused but had been recently claimed by powerful agribusiness companies.

And some came to demand that their simple way of life be restored, such as those who have been affected by the construction of the Pak Moon Dam more than two decades ago.

Whatever their problems, the protesters have one thing in common: they are poor, powerless and voiceless. As a result, their problems have received little government attention, in some cases for decades.

In recent years, they have banded together under the banner of the People's Movement for a Just Society (Pmove) to give themselves some leverage. They have rallied in Bangkok twice before.

The first time, they presented a list of demands to the Abhisit Vejjajiva government. When that failed to yield satisfactory results, they came again last year. Their spirits were lifted when Prime Minister Yingluck Shinawatra promised that committees would be set up to look into their problems.

Needless to say, that didn't happen, which is why they made yet another dreadful trip to Bangkok to demand the promise be fulfilled.

This is an embarrassment for the Pheu Thai Party-led government, which has claimed to be a champion of the poor. That is probably why the government's response to this week's rally was surprisingly swift.

However, Ms Yingluck's appointment of Deputy PM Chalerm Yubamrung to head the panel looking into the villagers' problems has been met with scepticism and even ridicule. After all, the flamboyant politician is better known for his rhetoric than for his action, especially for the poor.

Based on this fact alone, the villagers would be wise not to expect any dramatic resolution to their problems. But this is just a manifestation of other, more compelling, reasons why the rallying folks should not have their hopes up too high.

Taken as a whole, the villagers' problems would require extraordinary efforts and resources, not to mention time, to solve. They are certainly not on the government's priority list.

Having arrived at the apex of power through the votes of the poor, the Pheu Thai Party is focused on a narrow range of issues. First and foremost is to find a way to bring fugitive former PM Thaksin Shinawatra back home without serving a day in jail, and to amend the constitution to weaken checks and balances in order to strengthen its grip on power.

The second item on its priority list is to implement its 2-trillion-baht megaproject plan, its 350-billion-baht water management plan, and existing industrialisation schemes.

Both of these issues will demand total attention from party members and allies to move forward. The villagers' problems are a distraction which cannot be ignored but which could draw away resources, and the government cannot allow that to happen.

Furthermore, solving the villagers' problems would mean stepping on some powerful toes, likely those of the people the government wishes to keep as allies.

And something that could offer a more lasting solution to the perennial land problem _ such as Pmove's demand for a land tax to dilute private landholdings and free up land for the poor _ is definitely a non-starter. Influential landlords, including the Shinawatra clan and friends, would join forces to nip it in the bud.

So when the cabinet convenes its weekly meeting next Tuesday, it will probably approve Mr Chalerm's proposals to alleviate some of the villagers' problems in the short term, with a promise that more lasting solutions will follow in the future.

The immediate objective is to resolve the embarrassing situation facing the government. The trick, as always, is to appease the protesting villagers enough so that they agree to leave in peace. Once home, it would be extremely difficult for them to get organised and come to Bangkok again.

That would leave the government free to pursue its other "more important and urgent" objectives.

The irony is inescapable, because the government's development plans would take away more land and create even more problems for poor folks, while Pheu Thai's political manoeuvring would contribute nothing to the poor's wellbeing.

Thailand ranked sixth out of the top 10 countries where Chinese tourists prefer to use mobile payments, while Singapore ranked first, according to a report by Nielsen and Alipay.