You're not in Malaysia Mr Plodprasop
Opinion

You're not in Malaysia Mr Plodprasop

"Garbage", that's the exact word used by Deputy Prime Minister Plodprasop Suraswadi to label all the non-governmental organisations, environmental and civic groups which plan to protest in Chiang Mai over the next week, when some 1,500 delegates from 49 countries are attending the Second Asia-Pacific Water Summit in the northern capital. 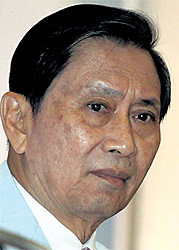 Not content with insulting these people, he also threatened to have them locked up in police cells, or even thrown in prison, if they dare to protest at the site of the international conference or in its vicinity.

Here is his exact insulting, threatening remark. "I warn the protesters not to come, otherwise they will all be arrested. There will be no space reserved for the protest but only jails awaiting them. There will be no talk whatsoever, only arrests. And the Chiang Mai people should not let these people, who are like garbage, mess around."

The derogatory way he referred to NGOs and the environmentalists, and the implicit way he suggested the people of Chiang Mai, the bastion of the red-shirt movement and a hard-core red-shirt group known as the Chiang Mai 51, should deal with them and prevent them from staging a protest is a clear reflection of what kind of a man he is and also his mindset.

Mr Plodprasop may have, somehow, mistakenly thought for a moment he was in Malaysia, where a protest in public needs approval from the police.

His threat is exactly the sort of action that Malaysian police are considering against Malaysia's opposition leader Anwar Abrahim and his associates for unapproved protest rallies against the result of the recent general election there, or the "mother of all election frauds" as they charge.

Here in Thailand, even in the red-shirt fortress of Chiang Mai, every individual or group of people of any political colour or non-colour has the constitutional right to public protest in a peaceful manner. The NGOs and environmentalists have every right to rally anywhere in Chiang Mai, even outside the water conference, so long as they do not break any law, including not blocking traffic.

There is no need whatsover for Mr Plodprasop to be afraid of these protesters, or to insult them in advance. They are educated and mature people - and probably are more responsible and care more about protecting the natural resources of this country, including the environment, than Mr Plodprasop and his officials do.

I can only presume that Mr Plosprasop does not want a demonstration in the northern capital during the Water Summit because the protesters may say a lot of bad things - but, unfortunately, they are also the truths - about his pet project, the 350-billion baht water management scheme that he plans to sell to the visiting delegates.

The delegates - many of whom are not well-informed about what actually is happening in this country – will undoubtedly be captivated by the PR deluge they will be swamped with about Mr Plodprasop’s pet project, and his presentation, without learning anything about the other side, the dark side of the scheme, which they could hear only from the protesters.

But truth cannot be concealed and Mr Plodprasop seems to have forgotten this.

All the delegates should be mindful of the fact it will be in their own interests, and ensure they are properly informed about the water management problems in this country, if they keep their options open and also lend an ear to the other side of the argument - not just soak up the information flood packaged by the Thai government.