Chiang Mai’s red-shirts, known as Rak Chiang Mai 51, may not join their fellow reds at a rally planned by the United Front for Democracy against Dictatorship (UDD) at Ratchaprasong intersection on Sunday to mark the third anniversary of the May 19, 2010 dispersal of protesters by the military.

It is not because they have any conflict with the UDD leadership. Or because they cannot afford to travel from Chiang Mai to Bangkok and back.

The real reason - or at least their given reason - is that they are too busy protecting the good name of the northern capital, at risk of being "tarnished" by the green groups that threatened to protest in front of the international convention hall where the 3rd Asia-Pacific Water Summit is being held from May 14-20.

Petcharavak Wattanapongsirikul, chief adviser of Rak Chiang Mai 51 and an adviser to the Human Development and Security minister, said they have to camp out at the water summit venue to prevent the green groups from protesting there.

He said that since Chiang Mai takes great pride in hosting this international conference, any attempt to stage a protest at the venue would give the northern capital a bad name. He suggested the protesters rally at Government House in Bangkok instead. They could then raise their complaints directly with the authorities directly concerned.

But would a peaceful protest by the green groups – and their protests are normally non-violent - really give Chiang Mai a bad name? I doubt it. 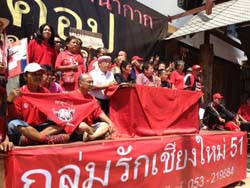 The counter-protest planned by Rak Chiang Mai 51 is far more likely to tarnish the city’s reputation as a place of friendly people, because it is intimidation and goes against the basic right of public assembly.

Since its inception in 2008, Chiang Mai’s red-shirt movement has ruled the streets in the northern capital to the extent that they mistakenly believe they are the only ones who have the right to protest there, and any other group who want to protest must first get their consent, or face the consequences.

I am not joking. Rak Chiang Mai 51 means business for anyone who dares to challenge them. Not even the police want to have trouble with them. The following are some examples of the group’s infamous track record, which may have slipped the memory of most people in Bangkok and elsewhere - but not in Chiang Mai.

In 2008, the group raided a community radio station of the People’s Alliance for Democracy and clashed with PAD supporters. The father of the owner of the station was beaten to death.

On Jan 23, 2009, the red-shirts raided a monastery of the Santi Asoke sect in Chiang Mai on the thinly-veiled pretext of searching for illegal material. Simultaneously, in nearby Lampang, a few hundred red-shirts entered the Regent Resort hotel to look for Chaiwat Sinsuwong, a PAD leader, who was reported to be chairing a seminar there.

In February 2009, the group used force and intimidation to break up the Gay Pride parade to highlight the HIV/Aids problem in the northern capital on the ridiculous grounds that the parade would ruin the tourism industry there.

In July 2009, the group laid siege to Wiang Ping hospital, where then public health minister Wittaya Kaewparadai was visiting it. The minister had to flee through the back door.

Then there was the incident involving then finance minister Korn Chatikavanich and commerce minister Porntiva Nakasai. They had to run the gauntlet of Chiang Mai’s red-shirts when they held a meeting with local businessmen to discuss tourism matters.

The above violent incidents speak volumes about the group’s perception of democracy -- a principle they and the UDD have persistently professed to fight for and to protect.

I wonder whether the UDD leaders will respect the lawful rights of the other people when they stage a mass rally at Ratchaprasong intersection this Sunday? Do they even bother to ask local business people and residents there whether they approve of the rally or if they want it to be moved elsewhere?