School size matters, but it should not be the only thing that counts. 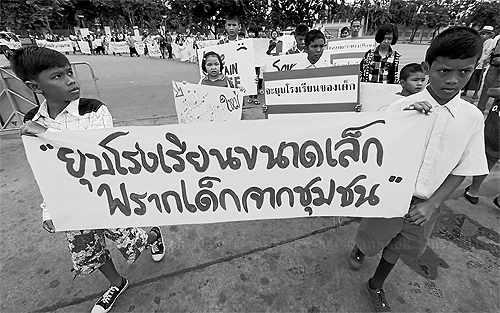 Children join a rally to protest against the Education Ministry’s policy to close small primary schools nationwide in 2011. The ministry wants to renew the policy again this year. CHANUT KATANYU

During the past week, there has been an intense public debate: Should the Education Ministry close down or merge small schools, especially those in rural areas?

Some have argued that closing down small schools is a huge mistake, as affected pupils will have to make long and exhausting trips to distant schools, resulting in many negative consequences like more car accidents, high transport costs and an erosion of the community spirit which is embedded in schools.

I wanted to elaborate on this debate further by examining two important notions of the education system _ accessibility and quality.

First, one can argue that small schools address the issue of accessibility. They allow pupils in rural areas to have better access to education. Basic education should be provided for one and all, so that human capabilities can be promoted.

However, does accessibility always mean quality?

Pupils should be able to have equal access to education as affordably and as easily as possible, but they must also have access to high quality education.

This brings us to the second notion _ quality. Size offers economic efficiency in terms of budgeting. Schools receive per-head subsidies from the government to support teachers and facilities. Naturally, smaller schools would have a smaller budget compared to larger ones with a greater number of pupils.

This substantial contrast shows that small schools will not have enough instructors to teach in every subject. Teachers will have to teach more than two or three subjects to varying year groups. While small-school mergers will address some of these issues, the process should not result in education becoming inaccessible for pupils. The decision to merge schools should be conducted on a case-by-case basis.

So, will there be any exceptions to the merger?

Education Minister Phongthep Thepkanchana argues that small schools can be exempt from mergers if they are located in remote areas where travel would be a serious concern.

They will also be exempt if they can show that their students' performance matches or exceeds the average national examination standards.

These exceptions are welcome, particularly as the opponents of this policy have argued that some small schools achieved higher Onet scores than larger ones in 2012.

However, the ministry's current plan to offer 15-30 baht per student per day for transport costs might be insufficient. The government should go further to explain how it will address the transport safety issue for our children. It will also have to address larger social and cultural concerns which have been raised by various parties.

The Thailand Development Research Institute's (TDRI) work also suggests size is not the only factor at play here; the government should think about two other significant concerns.

First, the curriculum has not been adapted to teaching our children how to live successfully in the 21st century. The curriculum fails to instil skills related to critical thinking, teamwork and communication, all essential elements in succeeding in the working world.

Second, a lack of accountability in the education system breeds poorer quality education. When students' performance declines, no one is held accountable. Teacher salaries and promotions are not tied to student performance.

Other factors like teacher quality, training, curriculum development and school assessment must also come into play when deciding how to improve school quality.

The details of these proposals can be found in Somkiat Tangkitvanich's March 27 opinion piece in the Bangkok Post and they are also available in Thai on the TDRI's website (www.tdri.or.th).

In the end, if a school's size is hurting its quality of education, then the government should carefully communicate and implement a plan of action to assist those who are affected.

On the other hand, if a small school is exempt from being merged, the government should also propose a plan to improve and strengthen the level of education in these schools.

There must be real political will to address the issue of quality, and this will allow policymakers to think in a broader sense of how to reform our academic institutions. This would ensure they do not fall into the trap of inefficiency and inadequate standards in the future. So far, we have heard very little on this.

Supanutt Sasiwuttiwat is a researcher with the Thailand Development Research Institute (TDRI). Policy analyses from the TDRI appear in the Bangkok Post on alternate Wednesdays.