Putting 'reform and reconciliation' in perspective

On the morning of Aug 7, the day the amnesty bill was to be considered by parliament, I made a final plea to the Pheu Thai government to "take one step back, three steps forward" to no avail. 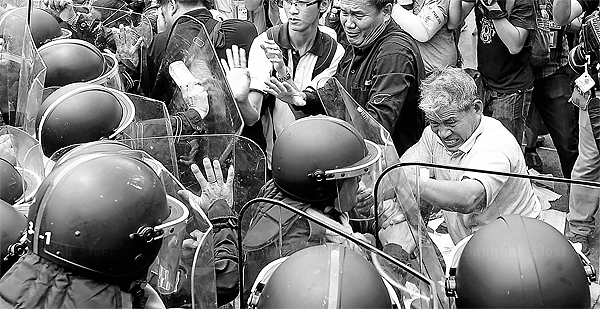 Anti-government protesters scuffle with riot police during a protest against the Worachai amnesty bill. AP/WASON WANICHAKORN

In that Facebook post, I had supported the need for reform as per Prime Minister Yingluck Shinawatra's suggestion two days earlier. However, I stressed two points: the first was that the government should show good faith by postponing the hugely contentious amnesty bill and the second was that any genuine reform would need to include the participation of broad civil society. not just political cronies and bitter has-beens.

This was a personal plea but one that very much reflects the standpoint of the Democrat Party.

Had the government agreed to postpone the deliberations regarding the amnesty bill, the Democrats would today be at the reform table, and we would have helped to convince others to join.

I had stressed that the cost to the government of a postponement was minimal. With two years left in its term, a one-year postponement should not be a concern, and I genuinely believed the willingness to compromise would have also been an extremely popular move for Ms Yingluck.

Alas, the opportunity was allowed to pass by, thus illustrating that the government was willing only to proceed precisely on its own terms, and those terms clearly reflect the agenda dictated by former prime minister Thaksin Shinawatra. It plainly refuses to accept the notion that amnesty does not necessarily equate to reconciliation, especially in this case.

Is the condition imposed by the Democrats reasonable? I certainly believe it is when you consider the context. No independent agency has voiced support of the government's obsessive pursuit of a blanket amnesty. Having initially committed to work with the Truth for Reconciliation Commission (TRC), the government subsequently ignored its findings and recommendations completely, simply because they did not fit Pheu Thai's agenda.

The government then ignored objections from the UN human rights office and, on Monday, the Pheu Thai spokesman was reported by the Bangkok Post to have lambasted the final report of our own Human Rights Watch. All because none of these organisations saw what needs to be done the same way Pheu Thai does.

Furthermore, it is clear that many families of those who lost their lives during the two-month protests in 2010 do not agree with this premature blanket amnesty. It should be noted that objections have been raised from families on both sides of the political divide. Indeed, the red-shirt-supporting mother of a nurse killed in Wat Pathum Wanaram on May 19, 2010, submitted her own draft amnesty law, known as "the People's Bill" which was much clearer as to precisely what crime the law would cover, and excluded main perpetrators from amnesty.

It should be further noted that Abhisit Vejjajiva and the Democrat Party immediately supported this draft, even though it was clear that the drafters had in mind Mr Abhisit as a guilty party. Herein lies the greatest irony of all, the "accused" Mr Abhisit and Mr Suthep, his ex-deputy, are fighting against amnesty and pushing for the justice system to take its course, while the "accuser", Thaksin, is doing everything to make sure none of the evidence ever reaches a court of law.

To date, none of the government's actions have pointed to any genuine desire for reform or reconciliation. They were so afraid of their own shadow that an unnecessary enactment of the National Security Act was issued, followed by an over-the-top display of police-led state power. When the "mob" demonstrated peacefully and within the law, instead of appreciating this democratic behaviour for what it was, the Pheu Thai Party machine went in to overdrive, deriding the participants for being weak in comparison to their red power. Meanwhile, police threats against the general public in social networks highlighted the complete lack of tolerance for dissenting voices.

The Pheu Thai government then turned on its normal default mode of using marketing as a way of creating an impression of success.

I have much respect for Messrs Tony Blair, Kofi Annan and Martti Ahtisaari, but the invitation for them to join the reform process cannot be seen in any way other than as an attempt to provide false legitimacy. All three gentlemen were here in Bangkok in 2012. I actually spent an hour with Mr Blair together with Mr Abhisit in a private discussion. All three shared a similar view, clearly stated, that reconciliation and subsequent reform could come about only through the respect of the rule of law and human rights. Mr Annan and Mr Ahtisaari specifically supported the TRC.

If they were intellectually honest, we can expect to hear exactly the same from them again were they to return next month. Indeed, this is precisely what our own TRC had concluded and was also the rationale given for the objection of the amnesty bill by the UNHRC. It is plain for all to see that the government cannot separate the issue of reform from amnesty. This is because there is a large body of opinion that strongly believes that blanket and premature amnesty will directly destroy the main tenet of liberal democracy: that no one should be above the law, not even if you have the majority voice in parliament.

It is not too late for a proper reform process to take place. However, the host organiser cannot be the government, but must be a body made up of all parts of society in which both Pheu Thai and Democrats take part in.

I wrote in that Facebook post on Aug 7 that all parts of society must be strengthened, be it the courts, civil service, military, the environment, economic structure, religion, parliament, and, yes, even the monarchy. Genuine reform can thus only take place if there is an open agenda, open minds and genuine intent.

The Pheu Thai government has a major role to play, of course. As the overwhelming power in the land, it must take the first steps to show that it is indeed acting for the public good. It must avoid all acts that benefit only its supporters, it must stop its intimidation of those with different opinions and it must behave in parliament as true democrats. The public was shocked that after having asked everyone to bring their dissent to be discussed in parliament, the premier herself, as a member of parliament, cynically chose to be entirely absent from the recent amnesty debates.

As an example, during the political crisis whilst the Democrats were in power, Mr Abhisit did two things that were significant compromises, neither of which were universally supported by his party members at the time. The first was when he offered the red shirts what they ostensibly were fighting for _ an early House dissolution. The second was when he appointed Kanit na Nakorn to head the TRC. This raised many eyebrows in the Democrat ranks because Dr Kanit was a founding member of Thaksin's Thai Rak Thai Party.

In both cases Mr Abhisit believed significant gestures needed to be made that were clearly not beneficial for the Democrats. I suggest now that Pheu Thai needs to think along the same lines.

Without meaningful compromise from those in power, they cannot expect trust, respect or cooperation for what will be rightly seen as a mere process to whitewash their self-serving strategy.

Korn Chatikavanij is deputy leader of the Democrat Party.