The mathematics is simple and straightforward. When you buy something such as a pack of rice at 200 baht and you sell it at 150 baht, the loss is 50 baht. And if there were other costs too, then the loss will be higher.

A few days back, former deputy prime minister and finance minister MR Pridiyathorn Devakula told the media that the rice pledging scheme had already cost the state (ie the taxpayers) an estimated 425 billion baht in losses for the 2011/12 and 2012/13 harvest years.

The Commerce Ministry immediately denied that the losses were as high as claimed by MR Pridiyathorn. It said the right figure would be about 100 billion baht a year. Deputy Prime Minister Kittirat Na-Ranong also questioned MR Pridiyathorn’s figure, adding that the former deputy prime minister and former governor of the Bank of Thailand was an economist and might not understand basic accountancy. 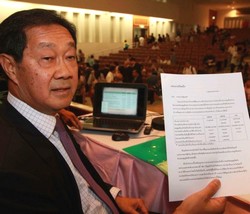 Former deputy prime minister and finance minister MR Pridiyathorn Devakula tells the media that the rice pledging scheme had already cost the state about B425 billion baht in losses for the 2011/12 and 2012/13 harvest years, on Oct 14, 2013. Bangkok Post file photo

MR Pridiyathorn’s weak point then with his estimated losses from the rice pledging scheme was that he did not present the details to back up the figure. So, on Monday he was back again criticising the scheme, but this time armed with all the necessary figures, which he said were obtained from the Commerce Ministry.

The standard excuse from the Commerce Ministry that the actual figures were not available because there is still rice in the stockpile and, therefore, full accounting is not possible, is totally unacceptable. I wonder if the same excuse could be used by a private firm when revenue officials ask why it is unable to submit its accounting books for taxation purposes?

This time around MR Pridiyathorn did not mention the corruption issue in the rice pledging scheme, which the Commerce Ministry has denied all along. The problem is that there are no receipts to prove the existence of the graft, which is believed to be widespread.

There is however a small item that, I believe, the Commerce Ministry must show -- the receipts to prove its own claim that some 7 billion bahts' worth of rice has been donated as relief aid to disaster-hit countries and to help flood victims at home. The ministry is claiming a refund from the cabinet. It must have the receipts, or does it?

MR Pridiyathorn, like many other critics of the rice pledging scheme, has no malicious intentions against the government, the Commerce Ministry or any individual ministers. They all just want to point out the serious flaws in the scheme, so that they can be fixed in order to stop the bleeding of our overall economy as a result of this poorly implemented populist policy.

The question is, when will the people in the government and in the Pheu Thai Party open their eyes and see the good side of this criticism and lend a receptive ear, so that both parties can work together to stop the bleeding?

Thais advised not to visit Kazakhstan

The Thai embassy in Astana has advised against making a visit to Kazakhstan, which has decreed a period of 14-days house quarantine for people arriving from Thailand.

An eruption of new cases in South Korea, Iran and Chinese hospitals and prisons rekindles concerns about the spread of Covid-19 disease, which has killed more than 2,200 people.

BEIJING: The earliest vaccine for the coronavius that has killed more than 2,000 in China alone will be submitted for clinical trials around late April, China's Vice Science and Technology Minister Xu Nanping said on Friday.