The folly of Thailand's endless protests

Is this the end of Thaksin Inc in Thailand? The more than 100,000 people who joined rallies Sunday to oust the nation's prime minister certainly hope so. So do the thousands who took to the streets again today, some of whom broke barricades and police lines to get inside the grounds of the Finance Ministry in Bangkok.

The biggest anti-government demonstrations since 2010 have less to do with Prime Minister Yingluck Shinawatra than her fugitive brother. Billionaire Thaksin Shinawatra was ousted as premier in a 2006 coup and has lived in exile overseas since fleeing graft charges in 2008. His baby sister Yingluck has been trying to get her big brother home since assuming the premiership in June 2011, and many Thais have had enough. She is now under growing pressure to resign or to dissolve parliament.

Thais and observers of their umpteen anti-government ruckuses tend to obsess over "red shirts" and "yellow shirts" and who the bad guys and good guys are at any given moment (it can be hard to keep track). We are all missing the plot -- what we're witnessing is a political system, and indeed an entire country, that seems hell-bent on committing economic suicide. 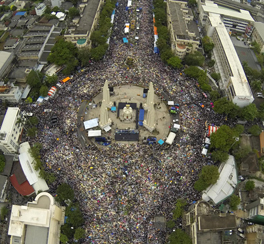 Sure, one could make the same observation about lawmakers in Washington willing to default on the country's debt. Or politicians in Tokyo so scared of rice farmers that another few years of stagnation seems preferable to suffering their wrath. But really, Thailand needs to get a grip on these self-destructive, tit-for-tat street demonstrations. One obvious suggestion is to elect better leaders. Another: let government institutions sort things out.

I'm not going to defend Yingluck's policies. Her pipe dreams about passing an amnesty bill, or tweaking the constitution so that her brother can return home and plunder anew need to end. Does she really think Thailand's 67 million people are that dumb?

But then, the Thai people must also remember that their leaders are, for better or worse, democratically elected and have real mandates. If one of them engages in improper activities -- as in the case of Thaksin allegedly using his office to enrich his family, hence Thaksin Inc. -- a democratic process exists to hold them accountable. If it doesn't, then create one.

The point here isn't to oversimplify Thailand's plight. My own country, the United States, often makes the mistake of thinking democracy can cure all. What's required is rule of law, equal protection for all people, and strong, accountable institutions. Good results depend on how a leader acts long after the ballot boxes close. By these measures, all democracies have a ways to go.

But Thailand is stuck in a terribly self-destructive cycle. Look, Thailand is an amazing, fascinating and beautiful country. Its economy has boundless potential. But the world won't wait for the country to get its act together. Economies as diverse as China, India, Indonesia, Malaysia, the Philippines and Vietnam are evolving in ways that enable them to leapfrog peers in a short span of a few years. Developing economies need to watch their backs. Sadly, Thailand is too preoccupied by internecine political squabbling and all things Thaksin to notice it risks getting left behind.

While the outcome of this family drama is anyone's guess, the immediate loser is the Thai economy. The SET Index of stocks has fallen about 7% in the past month, and you can bet those losses will only accelerate. Thailand's all-important tourism business will take another big hit if the unrest continues. Memories of 2010 are still raw: an army crackdown on protesters that left more than 90 people dead, the seizure of government offices and the closure of airports, stranding thousands of travellers.

The nation urgently needs better roads, ports, bridges and railways to plug into Asia's economic boom. Thailand could be a vital hub between China, India, the US and the other nine members of the Association of Southeast Asian Nations (Asean). Yes, the place has that much promise. If only Thais would stop believing that endless protests will get them anywhere.