Democracy as we know it is being poisoned
Opinion

Democracy as we know it is being poisoned

Thai democracy is in crisis because it is producing undemocratic results and practices. 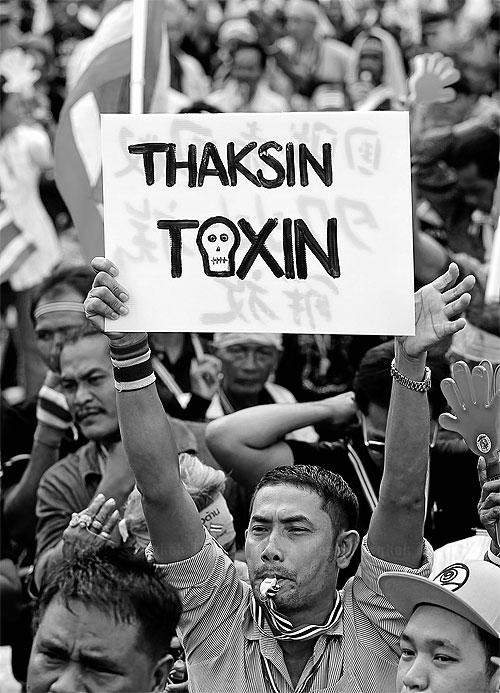 The surreptitious 4am attempt by a partisan faction in parliament to impose the dubious amnesty bill on an unsuspecting public is just one example of many.

The apparent mastery of democratic form has not been matched by statesmanship that is democratic in spirit.

Thai Rak Thai and its successors, including Pheu Thai, have grasped the form but not the content of true democracy.

Instead of governing the nation as a whole, they serve their leader with servility and serve their base with spoils.

They spread the meme of Machiavellian partisanship, as if elections were a winner-takes-all contest.

They practise patronage and favours and the carrot-and-stick, and punish or exclude those who disagree.

Elections can be gamed, and gamed they are, time and time again. But there is also the problematic tyranny of the majority.

One need only consider the examples of tyrants brought to power through a bump at the ballot box _ Ferdinand Marcos of the Philippines and Adolf Hitler of Germany, for example (for readers who dislike any mention of Hitler in kneejerk accordance with Godwin's law, no need to read on) _ to see that a plurality or a majority of votes is no guarantee of a democratic outcome.

In more contemporary terms, the great paradox of the Arab Spring is that bringing democracy to populations where fundamentalism thrives is a formula for self-destruction; democratic process undoes democratic norms at the ballot box. Followed to its logical conclusion, majority rule in places like Algeria and Egypt will produce results that are at odds with the survival of secular, civil society.

With a runaway electoral mandate, it is possible to erode, if not destroy, free speech, an independent judiciary, and social tolerance, instituting a dark age devoid of true democracy.

Democratic in form but not in content, election-backed tyranny can institutionalise intolerance, replace constitutional law with sharia law and reduce the political minority to second-class citizens in their own country.

Just as the rise of Islamism raises the basic question whether or not intolerance can be tolerated, the rise of sham democracies raises a parallel question: whether fealty to the outward rituals of democracy through elections, electioneering, media play and populism actually produces results worthy of the name democracy.

Surely there is something wrong with a system that allows an ambitious fugitive in Dubai to be the puppet master of parliament, the "remote control" of the prime minister while his clan is the beneficiary of rampant corruption.

Greedy, outsized schemes, whether they be hiking up the price of rice to insupportable levels to reward regional allies, or unnecessary big-ticket items like high-speed trains from China, a cash cow for those adept at corruption by percentages, only burdens the populace with debt, while increasing indebtedness to him and his corporate cronies.

Thailand is at a turning point; everyone's worried about what the future will look like.

To the inevitable cry, if you don't like the government you can vote them out, I say, nice textbook answer, but things don't always work out that way. Tell that to the frightened and confused Germans of the 1930s; tell that to the exploited and oppressed Filipinos of the 1970s; tell that to broken-hearted Americans frustrated with eight years of George W Bush and the war party, who then took part in a once-in-four-years ritual at the polls to chose between Tweedle Dee and Tweedle Dum, with the result that the new man, as different as he appeared to be at first glance from both his rivals and his predecessors, turned out to push the same policies.

What has been happening on the streets of Bangkok is a necessary venting of pent-up frustration, an active expression of democratic yearning, an assertion of minority speech coupled with the right of assembly. The non-violent guerrilla-style tactics of taking temporary control of public property recalls the Occupy protests in the US; the spirit of Zucotti Park is alive at Soi Aree today. The classic marches on Ratchadamnoen and other iconic centres draws on the heritage of the Bangkok demonstrations of the 1970s, Black May and the mass mobilisations of recent years.

It takes far more courage and commitment to take to the streets and sit in at a public place under constant threat of harassment and crackdown than it does to drop a ballot in a box. These huge popular demonstrations are a blunt expression of democracy in action, a wishful manifestation of the rule of the people by the people.

There is no saying where the current demonstrations will end, or what wrong turns protest leader Suthep Thaugsuban and his comrades might take, or when tragedy might befall unlucky people in the wrong place at the wrong time when the inevitable crackdown and Thermidor sets in.

But the people out there putting their lives on the line are worth listening to, because they are saying things that would otherwise find scant expression in a system dominated by the ruling party.

It's the voice of the disenfranchised opposition, speaking out, shouting out, trying to alter the fate of a nation that they see as being on a path to ruin. They are taking great personal risks and putting up with considerable discomfort to stop the runaway train of unchecked greed and coordinated power grab. They want their country back, they want fair play; they want to live in dignity, not debt.

Philip J Cunningham is a media researcher covering Asian politics. He is the author of Tiananmen Moon.