Election not the issue, it's when
Opinion

Election not the issue, it's when

It should be made clear from the outset that most of the people who took to the streets in two mass protests against the government and the Thaksin regime, on Nov 24 and Dec 9, and those who regularly join the rallies at the Democracy Monument and nearby are not against an election as a matter of principle.

Not even the People’s Democratic Reform Committee led by former Democrat MP Suthep Thaugsuban is against an election as a means for democratic governance.

They only reason they are against the Feb 2 election is because it is too soon and there will not be enough time for some necessary reforms before we go to the polls to choose our new members of the House of Representatives.

How can a boxing match be fair if the fighters are allowed into the ring while the rules of the game are flawed? The simple solution is to fix the flawed rules first, before the fight.

Likewise, in light of the current political conflict, the protesters' demand that the flaws in our political, economic and social systems be fixed first is neither ridiculous nor unjustified. We all know that all past elections were fraught with vote buying and other forms of cheating. Why not do something first, to pre-empt all these misdeeds from happening yet again? 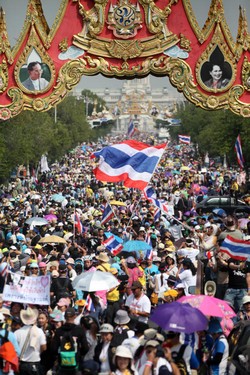 We all know that many politicians can hardly be trusted. They promise a lot of things, including reforms, during their election campaigns. After winning election it is a completely different story.

That explains why all the ready-made reform proposals put forward by respectable panels led by former prime minister Anand Panyarachun, Prawes Wasi and Kanit na Nakorn have been shelved somewhere by the government and are gathering dust.

The PDRC appears to have gone too far with its demand for the resignation of the entire caretaker cabinet so that an interim prime minister can be appointed and a people’s council formed to draw up a reform blueprint. But at the heart of their hardline demand is the desire for changes which must be made before there is an election.

Should we ignore the voice of hundreds of thousands of people in unison who are demanding reform before an election? This voice will get louder and louder, with more and more people joining the cause as the Feb 2 polls approach.

Even the military is divided on the Feb 2 election timeline. Defence permanent secretary Gen Nipat Thonglek, speaking on behalf of the Defence Ministry, is clearly supportive of the set timeline. However, the commanders of the three armed forces support the election as a matter of principle, without making it clear that they want the election to be held on Feb 2.

Earlier, permanent secretaries of all ministries and heads of state agencies of equal status issued a statement urging reform, saying that an election alone will not end the country’s political conflict.

It is no secret that the road to the Feb 2 is strewn with landmines. If the government wants to take the risk and ignore the calls for reform before an election, then it must also be ready to face the consequences and take the blame.

Keep elderly payment as is