Scattered across Cambodia are eight "drug treatment" centres. Each holds between 40 and 400 people whom the government claims are receiving treatment and rehabilitation for drug dependency. But don't be fooled. These centres are often surrounded by high walls or barbed wire fences. They are run by the police, gendarmerie and the army, or government agencies with no medical expertise. 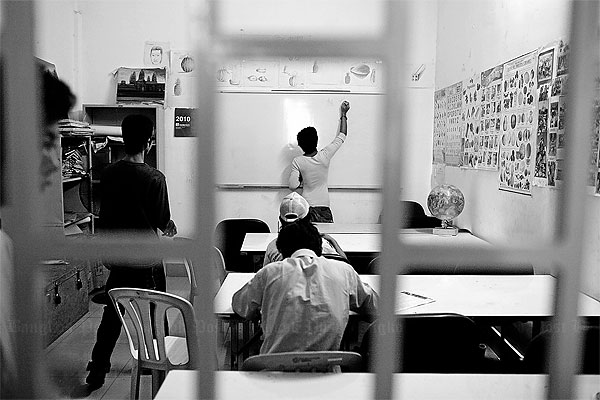 A free class for addicts at a drug drop-in centre in Phnom Penh. Drug detention centres run by the government in Cambodia are rife with abuse, says Human Rights Watch. THE NEW YORK TIMES/ JUSTIN MOTT

There is no evidence-based treatment available. Instead, "treatment" consists of exhausting physical exercises and military-like drills to "sweat out" the drugs. This approach ignores decades of research and understanding of drug dependency as a chronic, often relapsing, but treatable illness. But then it's not necessary to be dependent, or even use drugs, to be locked up in Cambodia. The centres also confine homeless people, beggars, street children, sex workers, and people with disabilities _ all of them forced to do the exercises and drills.

The Cambodian authorities sweep urban streets of those it considers "undesirable" and dump them in these centres. There are no lawyers or trials, no formal sentences, and no opportunity to appeal. Many are locked up ahead of high-profile international meetings or visits by foreign dignitaries. When Cambodia hosted three large Asean summits in 2012, the centres were bursting at the seams with those too "undesirable" to be seen by the visitors.

Human Rights Watch published a study called "They Treat Us Like Animals", which documents conditions in these centres. Former detainees said they were punched and kicked by centre staff, whipped with rubber hoses, hit with sticks or branches, shocked with electric batons, and punished with physical exercises intended to cause intense physical pain and humiliation, such as having to crawl along stony ground. Female former detainees described rape and other sexual abuse by male guards. Many detainees were forced to work without pay on centre vegetable plots or on construction site work gangs. Those who refused to work were beaten.

In March 2012, 12 United Nations agencies issued an unprecedented joint statement that called on countries with drug detention centres, such as Cambodia, "to close them without delay and to release the individuals detained". Cambodian authorities have not publicly responded, nor have they stopped locking people up in these centres and abusing them. Cambodian authorities have neither investigated reports of torture and other criminal acts in the centres, nor held anyone responsible for these abuses. Since 2010, when Human Rights Watch released its first report on the problem, three centres have closed. The authorities can close them when they want to. But the overall number of men, women and even children detained in these centres across the country remains constant _ around 2,200 each year.

Cambodia is not alone in running abusive drug detention centres. They are common elsewhere in Southeast Asia and China, with some recent estimates on the combined detainee population reaching nearly 240,000. But there is talk of reform in the region. Malaysia had 28 centres in 2009; it now has 17. Earlier this year, Vietnam circulated an unsigned, draft "renovation" plan for its centres that would reduce the number of detainees from 35,000 to 10,000 by 2020. It's just talk at this stage and clearly doesn't go far enough. That's hardly the "immediate closure" that the UN has called for _ but at least it's more promising than in Cambodia.

When Human Rights Watch reiterated its call in July 2012 for Cambodia to close its centres, the then-deputy secretary-general of the national drugs authority told local media: "Why do they just always recommend closure? Do they want the drug users walking around?"

They do. Everyone in the centres has a right to be free from torture and other forms of physical and sexual abuse, and to liberty, except when deprived of that right by due process of the law. Consider that many detainees try to escape because of the ill-treatment and poor conditions, despite knowing the authorities will brutally punish them if they are recaptured, and in some cases knowing that they will return to precarious lives on the streets. Detainees are safer and healthier outside of detention centres than inside of them, and having no home, or sitting in a park, should not be a crime.

Far more needs to be done by way of voluntary assistance and support for Cambodia's "undesirables". Social services and voluntary, community-based drug dependency treatment need to be expanded. But even if that scale-up began tomorrow, it would be unconscionable to leave people in these abusive detention centres until such services are available across the country. The Cambodian government has authorised small-scale voluntary, community-based drug treatment projects in four provinces. But Cambodian officials have frequently stated that these voluntary treatment options won't replace their centres.

A clear-eyed assessment starts with recognising that the people in charge of these operations are not genuinely motivated by a desire to provide drug treatment and rehabilitation. An assessment considers the extraordinary pain, suffering and humiliation the centres inflict. And it ends with the conclusion that there are no legitimate legal or health reasons for the ongoing detention of people in the centres, drug users or otherwise. Eight more centres need to close.

Joe Amon is the health and human rights director at Human Rights Watch.