Protesters have no right to force their opinions on others
Opinion

Protesters have no right to force their opinions on others

<b>EDITORIAL: </b>PDRC protesters are entitled to voice their disagreement with the election but they have no right to force others to share their views.

After ordering protesters to surround the Thai-Japanese sports stadium in Din Daeng _ the registration venue for election candidates _ Mr Suthep changed his mind on Tuesday afternoon and told his followers to return to the Democracy Monument on Ratchadamnoen Avenue.

The protesters are entitled to voice their disagreement with the Feb 2 election, which will go ahead before the reforms they have demanded.

But preventing candidates from registering on Monday to run was in breach of those candidates' basic rights. The protesters have no right to force others to share their views.

Some protesters harassed and attacked reporters covering the event. This resulted in many of them being stuck inside the stadium for several hours.

Other protesters stormed the office of the Department of Special Investigation, claiming they wanted to see the evidence behind charges levied at their leaders.

These actions are beyond the bounds of peaceful protest; they are illegal and in breach of people's rights.

So, the decision to withdraw from the election registration venue was appreciated, and we hope the muan maha prachachon, or the great mass of people, will keep their demonstrations peaceful and unarmed.

We fully agree with the protesters in expressing their views, showing their disagreement with Yingluck Shinawatra's government and its attempts to enact the controversial amnesty bill and the charter-amendment draft on the make-up of the Senate.

But we strongly disagree with some protest leaders' harsh words attacking members of the Yingluck administration, and any actions that are illegal or in breach of the basic rights of others. 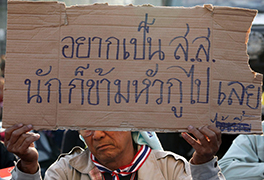 An anti-government protester holds a sign reading "Jump over my head if you want to become an MP", during the blockade of the Thai-Japanese Stadium. (Photo by Thiti Wannamontha)

Mr Suthep announced earlier that protesters nationwide would shut down the country on election day to block people exercising their right to vote.

This could lead to violence as many voters, particularly those in support of the Pheu Thai Party, will insist on casting their ballots.

So instead of blocking the election, the anti-government protesters should campaign for their supporters to cast ''No'' votes in the booths to express disagreement with the Pheu Thai Party and the election.

At the same time, we urge anti-government protesters to support the seven private-sector organisations' proposal for the government to issue a decree to set up a body to handle political reforms.

While the reforms must be agreed upon by all parties they affect, they should occur separately from the election, which is related to the democratic system.

All political parties must commit to the reforms. Also, after the Feb 2 election, the House must be dissolved as soon as the reforms are completed and a snap election called under new rules established by the reforms.

The new government formed after the Feb 2 election must not enact any controversial bills, like the amnesty bill or the charter-amendment draft. This is the only way out of the crisis.

May I take this opportunity to wish a Merry Christmas to all readers.