Out with the outdated Thai regime
Opinion

Out with the outdated Thai regime

A friend of mine who is a businessman was asked why he was not out in the streets protesting. Is he not against corruption? But of course, he’s against corruption. In fact, he hates it so much that he has filed a lawsuit against a certain government ministry over unethical practices.

But isn’t that all the more reason for him to be out in the streets protesting? Well, not quite. His lawsuit was filed against the ministry in question under the Democrat government three years ago, not Pheu Thai. Drum roll, please. 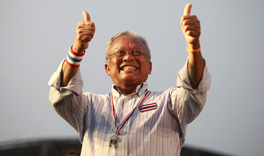 After all, Thaksin is a true son of Thailand. He represents this outdated Thai regime in almost all aspects – as does the representative of his opposition, Suthep Thaugsuban. Let’s take a look.

Thaksin’s political support is built around a network of family politics and cronyism. Check. Suthep had four family members in politics, this was before they resigned to protest, of course, and he is the most powerful man in the Democrat Party as he controls the southern MPs. Check.

Thaksin’s business support is built around a network of shared interests and mutual profit margins. Check. Suthep’s business interests are well known to be in land and rubber, among others. Check.

Thaksin’s government and nominee governments are marred by corruption allegations. Check. In 1995, Suthep’s Sor Por Kor 4-01 land scheme scandal led to the downfall of the Democrat-led Chuan Leekpai government – then there’s the rubber controversy during the Abhisit Vejjajiva-led government. Check. 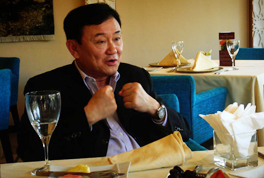 Through marketing propaganda, Thaksin’s image constantly bombarded the Thai populace while he was prime minister. Check. Through persuasion or intimidation of the press, Suthep has made sure his face, words and deeds are constantly in the media during the protests. Check.

Hallelujah, the clouds are parting and the light is shining through from heaven. Paternalism, tribalism, hero-worship, corruption, cronyism, nepotism, propaganda and all the other –isms and non-isms, we can find them all plaguing both sides of the political divide.

So let’s just eradicate the outdated Thai regime, be it Pheu Thai, Democrat or any other.