Victory for Suthep, of sorts
Opinion

Victory for Suthep, of sorts

Ratchaprasong shopping street, Lumpini Park camping bonanza and Asoke/Ploenchit/Silom music festivals, none of these may seem much of a threat to the Thaksin Shinawatra political machine.

In fact, add to it the unusually cool weather and clear sky, the decrease in pollution due to less traffic, and locals and tourists alike are enjoying central Bangkok like never before.

Couples stroll holding hands, families feasting on street foods and buying "Shutdown" souvenirs, tourists snapping pictures, pointing and giggling to each other,"Oh my gosh, you guys, we’re like in the third world! But better!" 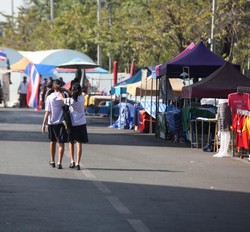 Come nighttime after people get off work, they join together and dance to free concerts by some of Thailand’s biggest stars – the laughter, the smiles and the togetherness.

Except for the sporadic shootings and grenade lobbing, can we keep central Bangkok like this? I haven’t driven the car in two weeks, just motorbike or walk. Living and working in this area has become the best of times,  leaving the Doucal’s in the shoe closet and wearing the Converse everyday.

But of course this cannot last. Something has to give, and there’s a way Suthep Thaugsuban can win this.

The protest sites may be relatively empty during the daytime. Bangkok protesters have to work, so that pretty much just leaves the southerners who made the trip up to the capital. But come evening, things are much livelier and if Suthep makes the call, hundreds of thousands may come out again. It is simply a matter of timing.

The controversial rice-pledging scheme is coming back to bite the Pheu Thai Party in the butt, with the National Anti Corruption Commission (NACC) pressing hard. The lies, the corruption and the incompetence involved in the scheme would make Baby Jesus cry.

Add to that the caretaker prime minister, Yingluck Shinawatra, chairperson of the rice-pledging committee and clone extraordinaire. The chairperson who knows less about the scheme than the oh-my-gosh tourist, and there’s a strong case.

Multiply the above by the sneaky blanket amnesty bill, and a government openly run by a fugitive convicted criminal, well that’s more than enough grounds for the people to rise up and demand that Pheu Thai step down – to dissolve the House and call for a fresh round of elections!

But wait a minute, the prime minister has already dissolved the House and the election is set for Feb 2.

Perhaps given everything over the past 10 years, the Thaksin political machine deserves a more severe punishment than just having to contest another election, which Pheu Thai is, of course, sure to win.

Perhaps add to everything else the increasing pressure from the protesters and "The Others", at the right time, and there are grounds for the Constitution Court to ban the Pheu Thai Party and all its politicians. 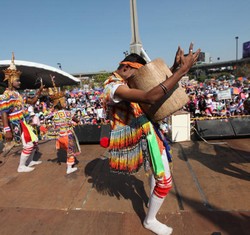 With Thailand not having a government, then one may be appointed. But of course, this is a democratic revolution, so the power will be returned to the people eventually.

However before returning to a democratic election, say in a year’s time, sweeping reforms will be made that will change nothing about Thailand except that upcountry parliament seats may be reduced to about 12, while southern seats increase to 300.

So come election time, perhaps in a year, the fourth incarnation of the Thaksin puppet, clone and nominee (after Thai Rak Thai, People’s Power Party and Pheu Thai) would not be able to beat Abhisit Vejjajiva and the Democrat Party.

Of course, it would not be so simple. At anytime, a horde of hundreds of thousands of red-shirts may descend upon Bangkok, crying for justice and vengeance.

But as the Egyptian Mamluks stopped the Mongolian horde dead in its tracks at the Battle of Ain Jalut in the sands of Galilee; as Major General George Meade’s Army of the Potomac beat back the last hurrah of General Robert E. Lee’s Arm of Northern Virginia at Gettysburg.

As Rhett Butler said to Scarlett O’Hara, "Frankly, my dear, I don’t give a damn."

Just as in all those dramatic moments in history, the military would stop the red legion stone cold on the Asia-Pacific Highway, just outside the old capital of Ayutthaya.

The people of Bangkok would tell the northerners, "Frankly, my Laos, it’s better this way."

Having put the Middle Earth in righteous order, as promised Suthep may then give up worldly things and sail to Aman, the Undying Lands, the Blessed Realm of the Valar and the High Elves. Leaving the realm of man forever to the follies of men.

From across the sea, we shall wave goodbye to the uncle who did it "kamnan-style". With tears in our eyes, we then head back to the Shire, happily ever after… or until the next time.

Are you not entertained?

The House is expected to be dissolved on March 15 and a general election held on May 7, according to a deputy chief government whip.

WASHINGTON - The United States said Wednesday that suspected Chinese spy balloons like the one it shot down were part of a "fleet" that has spanned five continents, as NATO joined in voicing concern.