Academic warns of 'state of paralysis'

A man uploaded onto YouTube a video of himself shooting handguns at what appears to be a deserted range while attesting that he will go to vote on Sunday and no-one should try to stop him. 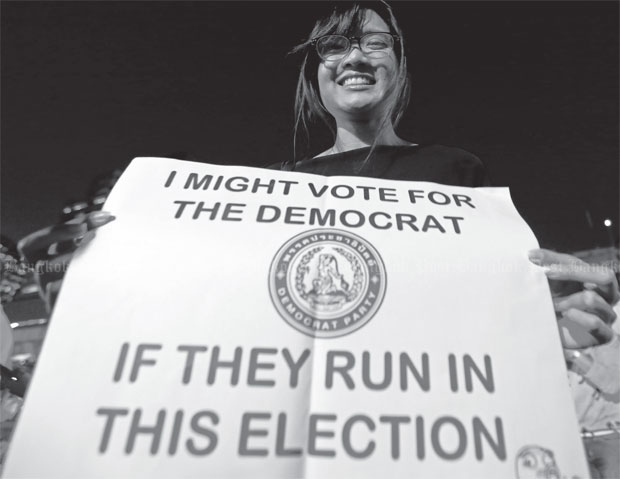 A pro-democracy activist holds a placard during a rally to show support for the general election on Sunday. Political scientist Prajak Kongkirati, below, warns that a state of government paralysis could follow now the anti-government protesters have turned to oppose the electoral process itself. EPA/NYEIN CHAN NAING

A protest-friendly radio news host this week declared: ''If you love democracy, don't go to vote.''

Another woman posed on her Facebook page: ''Voting is an unpatriotic act. How have we come to this?"

The general election scheduled for tomorrow has become a battleground, literally and ideologically, for the caretaker government which insists the poll must be held as planned and anti-government protesters who maintain that it be delayed to make way for the reform of the country through an appointed interim government and reform committee.

The anti-government protesters, led by former Democrat MP Suthep Thaugsuban, have called on people to join their mass rally on Sunday instead of going to the polls.

The People's Democratic Reform Committee argues (PDRC) that it does not want democracy to be just about an election, which it says turns out political parties that promise the most to voters without adhering to financial discipline.

For the protest group, the Yingluck government may be democratically elected but it abuses its mandate and functions as a tyrant of the majority.

The group argues that it must implement reform of the country's administration first so that it is ready to enjoy ''genuine democracy'' with effective checks and balances to keep the elected government and corrupt practices in line.

The PDRC's attempt to block advance voting on Sunday Jan 26, however, resulted in clashes with government and election supporters in many areas of Bangkok, with one of its leaders Sutin Tharatin shot dead in a skirmish in Bang Na.

The shift by the PDRC protesters from opposing former Thaksin Shinawatra and the caretaker government of his sister Yingluck to targeting the election itself is an unprecedented phenomenon even for Thailand's tumultuous politics, which has seen 25 general elections since 1933 and 12 military coups.

The PDRC rejecting the election has escalated the deep-seated political conflict to another level from which it will be difficult for the country to recover, political scientist Prajak Kongkirati says.

Mr Prajak, a lecturer at Thammasat University, said the PDRC's transformation from being an anti-government group to becoming an anti-election one is a ''big mistake''.

''The PDRC has triggered a situation for a possible clash of the masses,'' Mr Prajak said.

By boycotting the election, the protest group has turned not just millions of people who support the Yingluck government into its enemies, but also millions of others who still cherish their democratic right through the electoral process.

Mr Prajak, who studied electoral violence in Thailand from 1975 to 2011 for his PhD dissertation at the Australian National University, admitted that the animosity towards the election itself marks an unprecedented development in the country's prolonged political conflict.

In short, the PDRC has destroyed the previously agreed-upon means to settle political conflicts, he said. By boycotting the election, the PDRC broke the peaceful and democratic way for the general public to participate in a process to decide who should have the right to govern, Mr Prajak said.

''The PDRC is pushing society closer to a corner where there is no exit,'' Mr Prajak argues.

He added that while there has been violence in every election that he studied after Oct 14, 1973 to the latest one in 2011, it was targeted at individuals  candidates who feared they might eventually lose at the poll, political canvassers or mafia types. The scales were also limited. Each election from 1975 to 2011 saw no more than 30 people killed, Mr Prajak said.

Even the latest election on July 3, 2011, which was widely expected to become a bloody one because it was held after the crackdown on red-shirt protesters which left more than 90 people dead, ended relatively smoothly with three deaths recorded officially.

"The most violence that Abhisit Vejjajiva or Yingluck Shinawatra faced during the last election was egg throwing,'' Mr Prajak noted.

Although he disagrees with the PDRC's anti-election move, Mr Prajak said he understands the group's frustrations.

The PDRC protesters consist of two main groups: members of the Bangkok middle class and people from the South.

"In the current electoral landscape, these two groups which make up the Democrat voters base, are the minority,'' Mr Prajak said.

Worse, they are the minority with no hope of turning the tables in the electoral system. Their main vehicle in the parliamentary system, the Democrat Party, has not won a general election in more than two decades.

Most people, including Mr Prajak, blame the country's oldest party itself for failing to reform itself so that it can become a viable alternative for the ''frustrated minority'' in the electoral contest.

He cited the inability of the Democrat to win the election as one of the reasons why these people have turned to street protests to vent their frustrations. Mr Prajak also said that he believed the Democrats' decision to boycott the Feb 2 election will further erode its standing in the electoral democracy in the long run.

With the conflict raised to the anti-democracy level, will the country be able to recover from it?

Mr Prajak believes it is possible albeit very difficult.

He said without a deciding factor, namely military intervention, the stalemate between the government and the protesters both of which enjoy similar levels of support is likely to continue after the Sunday election.

He said the civil-war scenario which some observers worry could eventually occur is unlikely because it will hurt the protesters themselves, most of them are from the well-to-do and middle class the most.

He predicted that a state of paralysis and failed government will prevail with the country suffering political instability for a few more years.

"We have a sizable group of people, hundreds of thousands of them, who are determined in their rejection of the election. How can democracy continue under this condition? How will we live together in peace?,'' Mr Prajak asked.

One of the post-election challenges is therefore how to bring these people, who Mr Prajak admitted make up a powerful force in Thai society both in terms of economic prowess and social influence, back into the fold of electoral democracy.

A failure to do so could plunge the country into a state of anarchy, he said.