In a storm of hate we lose our humanity
Opinion

In a storm of hate we lose our humanity

In Thailand’s increasingly polarised and desperate political situation, vitriol and invective have become common, and virulent sexism and hate speech are spiking dramatically. 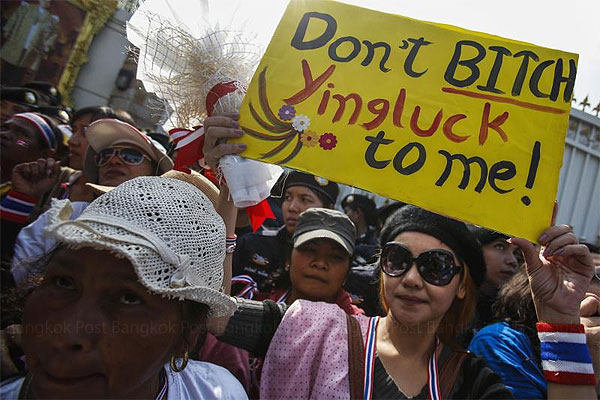 An anti-government protester holds a placard attacking caretaker Prime Minister Yingluck Shinawatra during a mass rally. While Ms Yingluck has become the main target of misogynistic insults and hate speech, her supporters also resort to the same tricks to vilify her political opponents.  REUTERS/Athit Perawongmetha

Vile racist, sexist, dehumanising insults and personal attacks have been exchanged across the political divide since the early days of the current crisis in the mid-2000s. It seems more and more Thais have abandoned our legendary politeness and become nastier in public. “Face breaking” is fast becoming a new national past time.

The abuse of our first female prime minister has become so bad that many international media have highlighted the ugly misogyny and the filthy and hate-filled language.

I was relieved to see some Thai women’s rights organisations and advocates speaking out publicly at last, after a long silence. The appalling misogyny deserves more domestic reflection and condemnation.

But the sad truth is, it’s often committed by political leaders themselves, from the main opposition party leaders and members to respected doctors, university professors and famous celebrities.

I feel ashamed of my fellow Thais who think calling Ms Yingluck a “dumb bitch” or a “whore”, and laughing at jokes involving her vagina and about sexual assault, shows they are supposedly smarter and worthier than she is.

There’s been an awakening in Thai civil society to ugly hate speech. Yet political leaders are still largely silent, especially when it occurs on their own side.

It’s not just Thai women’s equal position and standing that become threatened. The equal standing of all Thais is being threatened — our morality, humanity and dignity — when political enemies are debased to the extent they are no longer equal human beings worthy of common decency and respect.

But, Ms Yingluck is not the only victim. Misogynistic and homophobic insults and hate speech have been hurled by her supporters at opposition figures too.

We have seen decapitated heads of Ms Yingluck, her brother and their political allies, an image of Ms Yingluck naked climbing a thorny tree after death, and photoshopped pictures of Mr Suthep and the Democrat Party leader Abhisit Vejjajiva with a noose around their necks. Mr Suthep has also been seen on a wanted notice up in Isan with a 500,000-baht bounty on his head.

With top political leaders already depicted after horrific deaths, or suffering in this life or the next, images of other political players bloodied and bruised are starting to emerge.

The imagined violence goes in parallel with the dehumanisation and demonisation that is not only condoned, but is part of the top-level rhetoric.

After a protester was killed in a blast in January, Mr Suthep shouted from the protest stage that Ms Yingluck was “an animal” and “not human”, and reminded his supporters they were fighting “fiendish monsters from hell”. The truth of the matter is that she is the little sister of the square-faced devil whose evils — the protesters believe — must be eradicated.

The anti-government crowds love to use the word “eradicate” when referring to the so-called Thaksin regime plaguing Thailand. Those who don’t support them are quickly branded “unpatriotic”, “red buffalos”, or “Thaksin’s slaves”.

Killing communists was permissible in the 1970s. It’s not a big stretch that to think killing “monsters” and “slaves” of the evil one is permissible today too.

It has already started. The mini-riots around Ramkhamhaeng University at the end of last year, where red shirts were pulled from their vehicles and stripped of their red shirts, which were burned on the spot. The senseless beating of a taxi driver at a road blockade and a homeless man found with a red shirt among his belongings.

Some bodies have also been depicted in anti-government protest clothing and accessories. These are dangerous signs of ominous undercurrents.

In the political struggle between the old and new behemoths, blind partisan hatred is a reign of terror. Thais are once again cheering on the killings of other Thais.

Disturbingly familiar is the same old xenophobia reminiscent of the 1970s. Thammasat students were branded “Vietnamese communists: then. Now we hear of “Cambodians” supposedly brought in to help the red shirts and the police.

Ar-kaew Saelew, who was shot in the neck and paralysed from the neck down has been branded on social media as a “Cambodian right-hand man of Hun Sen”.

With both sides already suffering losses, each is now condemning the other as traitors and non-humans. Unrestrained resentment and anger are driving out decency, empathy and reason. Thailand needs more moral courage, not only from political leaders but also from its citizens to stand up for principles, not personalities. Those who believe in decency, democracy, justice and peace must defend them.

More voices of reason need to be heard. We need to start a civilised and open public debate to sort out political disagreements, to find common ground and agree on how to move our country forward and avoid violence.

Whether our favoured principles are human rights and equality, or duty and tradition, none of us have exclusive claims on righteousness and love for the nation.

The talk of civil war or splitting Thailand in half is getting louder. Unpleasant and unlikely as it is, it is not entirely implausible. Still, looking at Egypt, Syria or Nepal should give us pause.

The end results of uncontrolled hate are not what we want to experience first-hand.

Kaewmala is a writer and social commentator. Her blog is thaiwomantalks.com.