May I begin with assurances that the government has a strong will and good intentions with the rice-pledging scheme. I had full confidence when the Pheu Thai Party proposed this scheme — with the trust that you have given to the party and me — that this scheme would boost farmers’ income and quality of life as well as ensure the prosperity, security and sustainability of the sector. 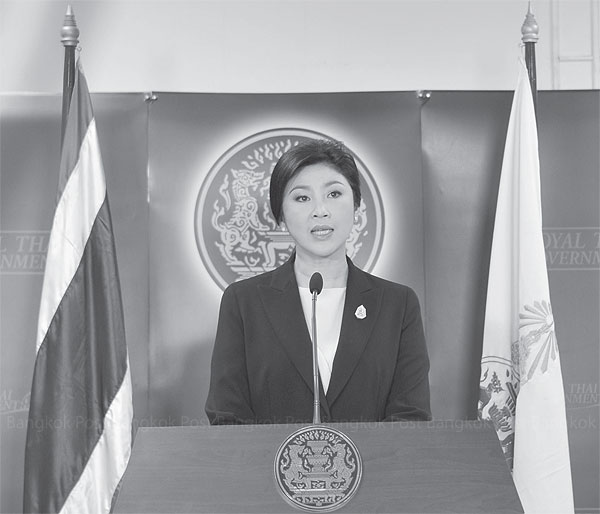 Farmers are the backbone of the nation. Every Thai who eats rice must feel grateful to farmers, for every grain that makes us grow. In reality, it’s sad that farmers are being taken advantage of and exploited and they have to continue working in a back-breaking environment.

Over the past two years, the government's rice-pledging scheme has proven to be a success, meeting its targets, and has helped generate more income for farmers. It has strengthened the grassroots economy, as well as economic growth as a whole.

The sources of the scheme's revolving fund are clear.

The first is income from rice sales which is the responsibility of the Commerce Ministry. The second is a subsidy fund managed by the Finance Ministry under a mechanism which includes loans from the Bank for Agriculture and Agricultural Cooperatives and other state and private financial institutes under a government-set ceiling.

The public has realised the scheme’s success, with money going straight to the farmers. With continuing popularity, the scheme is the pride of those involved.

It is unfortunate, however, that the dreams and hopes of farmers to have a better life have been crushed by political games.

With sadness, I have to apologise all the farmers who are being taken hostage in an unfortunate episode by anti-government groups whose campaigns make it impossible for the government to run it smoothly.

But no matter how huge the obstacles are, I will not be disheartened. I will continue to stand up and protect the farmers.

The political games I mentioned involve anti-government factions that want to oust my elected government, and establish a non-elected administration. I can accept differences in opinion and the right to peaceful protests.

But once I dissolved the House, I returned the power to the people. Every party should look to the election and allow the people to make a decision on which policy they want, or who to run the nation.

Yet the anti-government groups have rejected that international convention. They didn’t take part in the elections and they pursue tactics that seek to discredit the government without regard for damage which the nation must sustain. They are ready to use every means to destroy a project that benefits the people, such as the rice-pledging scheme.

Now they have tried to block the government from making payments to the farmers by disrupting our efforts to find revolving funding in a systematic way.

They have tried to block state officials from performing their duty.

In fact, if every party acts with sincerity, if bankers have compassion for the farmers and realise their plight, the fund management can go on. I can assure you the government is responsible for every baht and the bank loans have been guaranteed under the law, so it’s not possible for anyone to misuse the loans.

Given the high stability of our financial institutions and high levels of liquidity in the banking system, giving loans to farmers will not pose risks to any bank.

The funding problem is different from the previous crisis that ended with the collapse of financial institutions. The scheme is overseen with stringent fiscal discipline. Banks, bank management, bank officers and workers’ unions have no need to worry since every process has been undertaken in accordance with the law and cabinet resolutions.

Allegations and legal challenges have been brought against the scheme that it is plagued with corruption at the policy level. I insist there is no policy-led corruption. If there is corruption at the operational level, I want to see stricter measures against it.

I welcome scrutiny by the National Anti-Corruption Commission as long as it is fair and non-discriminatory under the rule of law — without bias or a political agenda. Otherwise, it will destroy not only a good scheme, but also the scrutiny system's credibility.

While you are waiting for your suspended payments, the government realises your plight and will ease your suffering by instructing the BAAC to extend the loan payment deadline for another six months.

So you can also secure access to loans for your next crop, the BAAC will lift the loan ceiling for its current customers with a loan guarantee.

The measure will also cover farmers who are not BAAC customers. Contact your closest BAAC branch if you need help. Farmers who belong to agricultural cooperatives can apply for the loans at cooperative offices.

Finally, as head of the government, I maintain that I will protect all farmers and members of the public. I will not tolerate political games that use the farmers as hostage.

I am asking all parties concerned to realise the suffering of the farmers. Every drop of sweat is precious.

We must not allow our backbone to become crippled. Farmers must enjoy a good quality of life, decent income, and have pride and dignity like any other people in this nation.