Leaders and politicians can be defined by words they probably wish they had never uttered.

Former prime minister Thaksin Shinawatra is still stuck with the Jone Krajok, or ‘’petty thieves’’, term he mistakenly used to refer to early-day insurgents in the deep South.

Former prime minister Abhisit Vejjajiva is still being burned by a remark he made to foreign media about the 2010 crackdown on red-shirt protesters: ‘’Unfortunately, some people died.’’

Former foreign minister Kasit Piromya’s summation of the yellow-shirt protest as a place for ‘’good food, excellent music’’ has become more memorable than any of his diplomatic legacy.

Caretaker Prime Minister Yingluck Shinawatra has her own defining words as well, not from one occasion but two. 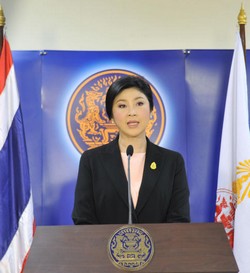 The first speech that made people look askance at Ms Yingluck, who normally projected a composed and politically innocuous persona, was during her trip to Mongolia.

The speech, delivered in April last year at a conference on democracy in Ulan Bator, was very controversial because for the first time Ms Yingluck openly discussed the case of her brother, former prime minister Thaksin Shinawatra, who was ousted by the coup in 2006.

Ms Yingluck’s take on democracy, delivered as Prime Minister of Thailand, conjured up a ferocious debate in Thailand because she seemed to reduce the years of political conflict in Thailand – the complex interconnection and clashes of ideologies, money politics, tendency for military intervention, patron-client networks and such – into a single occurrence.

Her brother Thaksin was overthrown by the coup in September 2006. Her family suffered greatly. Thailand lost track and was still struggling to overcome "anti-democratic elements" that still prevailed in the country, namely through independent agencies that abused their power, she said.

The Mongolia speech on April 29 laid bare Ms Yingluck’s view of democracy as largely about triumph at the ballot box and her complete disregard for the check-and-balance mechanisms, which just coincidentally is the same philosophy espoused by her brother.

Without doubt that  speech stirred up a lot of debate in a country that remains sharply divided between pro-Thaksin people, who think like him, and those who oppose the former PM and cherish systems that  closely monitor politicians' actions.

The other speech that will live on in people’s memories and define Ms Yingluck and what kind of leader she is, was delivered in defence of the rice pledging scheme on Tuesday this week.

Unfortunately for her, the rice speech is not just controversial like the Mongolia one. The rice speech is profoundly violent as it killed all facts about the scheme, for the sake of promoting its perceived popularity.

It is also very hurtful in its intention to divide people and to brand those who disagree with the government’s initiative as callous souls who have no heart for poor rice farmers.

In trying to defend what is essentially an indefensible, ill-conceived and loss-ridden scheme, Ms Yingluck has become a demagogue, a well-dressed, polite and photogenic one perhaps, but a manipulator all the same.

Just as Ms Yingluck chose to reduce the diversities of the tussle over demoracy in Thailand  into a simplistic tussle between Thaksin and the coup-makers, the caretaker PM in her latest speech obliterated all the problems that are plaguing her multi-billion-baht rice-buying scheme, shining the light only on the argument that she and her government love rice farmers.

Instead of addressing why her government has not been able to sell enough rice from the stockpile, which she bought at a cost markedly higher than market prices, and how she needs to borrow more and more to keep the project running, Ms Yingluck branded people who oppose her problematic way of running the vote-netting scheme as people who have "no çompassion’’ for farmers.

Ms Yingluck should know that these two issues are not related. There are people who would really like to help rice farmers, but who would not support such an inefficient subsidy as her rice-buying project. She should know,  but she wanted to brand them otherwise, possibly to gain political points for her caretaker government now facing challenges from both protesting rice farmers demanding their overdue payments and the anti-government group led by former Democrat MP Suthep Thaugsuban demanding her resignation.

Indeed, I would have no problem should Ms Yingluck admit that the rice pledging scheme is losing money, just like any similar subsidy programme that has been run by past governments, and that she feels that is all right.

I would not mind if she had said that, because that would be the truth. The problem, of course, is that  Ms Yingluck continued to insisted that her rice pledging scheme has proven to be a success, ‘’the pride of those involved.’’

Did Ms Yingluck not follow the news about protesting rice farmers pelting her Finance Minister Kittiratt Na- Ranong with water bottles the other day, because he would not give them an answer as to when her government will pay them for the rice they sold to the rice-pledging project monhs ago?

As a member of the Pheu Thai Party, which has made the rice-pledging scheme its marquee policy guaranteed to win a massive number of votes, Ms Yingluck might have felt the need to come out and defend the crucial platform.

As the country’s prime minister, even on a caretaker basis, Ms Yingluck risks diominishing the prestige of her office with such a divisive speech, a speech that tells the Thai public if they do not agree with her policy, then they are against helping the poor. It’s simply not true.

Atiya Achakulwisut is Contributing Editor of the Bangkok Post.