Thailand now needs sustainable constitutionalism harmonising with its Buddhist culture of seeking the equilibrium of the middle path between extremes and aligning with the rule of law. 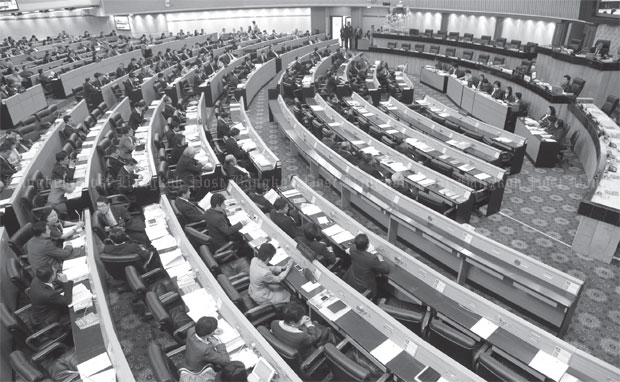 The West gave rise to two conflicting visions of Democracy — one from England and another one from France. The English version was authored principally by John Locke in 1689 and the French version by Jean Jacques Rousseau in 1762.

Locke’s constitutionalism sought to resolve the problem of abuse of power. Rousseau sought to provide an ideal standard of absolute justice along with a recommendation to concentrate power in the sovereign in order to achieve that ideal.

Locke’s constitutionalism was "bottom up" while Rousseau’s was "top down".

When Thailand moved from absolute to constitutional monarchy in 1932, its leaders adopted Rousseau’s constitutionalism. Field Marshal Plaek Phibulsonggram and subsequent military autocrats followed the Napoleonic model of nationalising authoritarianism. Thaksin Shinawatra followed in this tradition. Those on the "left" in Thai politics followed statesman Pridi Banomyong with his preference for mass-based electoral majoritarianism not dependent on either the monarchy or the military. Today this tradition manifests itself in the red shirts and the Pheu Thai Party.

But Thai constitutionalism has never settled into place because other influential Thai opinion-leaders and politicians tried to infuse into the country’s new Rousseauist constitutionalism more English practices associated with Locke’s concern for preventing abuses of power.

Rousseau’s central constitutional concept is "the General Will". This idea, which is to animate all decisions by government, is defined as the highest and the sole explanation of the common good of all. It is to be accepted by all, which makes everyone equal and the same. There are to be no "particular wills" of individuals or cliques or factions or social orders or special interests that can contest the supreme legitimacy of the General Will.

Rousseau argued that "… whosoever refuses to obey the General Will shall be compelled to do so by the whole body." Rousseauism thus became the basis for modern totalitarianism because it provides for no checks on the will of the majority.

For Locke, whenever the legislative or the executive acts "contrary to their trust", their government dissolves and the people are at liberty to erect a new one. Said Locke: "When they, by ambition, fear, folly or corruption, endeavour to grasp themselves or put into the hands of any other an absolute power over the lives, liberties, and estates of the people, by this breach of trust they forfeit the power to the people had put into their hands, and it devolves to the people who can establish a new legislature".

Thaksin’s manoeuvres to concentrate power in his hand by means of bringing elected officials under his personal sway caused his government to lose its legitimacy under Locke’s constitutional system. So, under that system, by seizing too much power Thaksin forfeited his authority and the people of Thailand were within their rights to withdraw allegiance from him and his ministers and seek to replace his government with one more faithful to upholding the public trust.

To achieve more sustainable constitutionality in Thailand, the country’s constitution should be amended to use more Locke and less Rousseau.

The executive branch of the national government should be removed from direct dependence on the National Assembly. The chief administrative officer of the cabinet of ministers should be directly elected by the people for — say — a three-year term of office. The election of the chief administrative officer would be held in years when the House of Representatives is not elected.

Second, central ministries should be decentralised to reduce their capacity for rent extraction. In particular, the Ministry of the Interior should be abolished in large part with many of its powers transferred to provinces and local communities. The centralised ministry created by Prince Damrong during the era of French and British colonial expansion in order to protect the territorial integrity of Thailand is no longer needed.

Third, the national police must be converted to community policing, both in structure and in tactics. A police force organised as light infantry along Cold War lines is no longer needed by Thailand.

Reform of the judicial branch is also necessary to enhance the social presence of the rule of law. So that the opinions of courts can gain more respect for their probity and logical correctness and that judges will be more accountable for excellence in their decision-making, all court opinions should be published in full as signed by the judges on the day of decision. Second, the constitution should specify deadlines for the final resolution of litigated cases and appeals thereof.

The constitution should specify the duties of the National Assembly to limit its ability to dominate personnel selection and decision-making in government ministries. The National Assembly would have limited functions to enact general legislation only, raise taxes, approve budgets, and advise and consent on major government personnel appointments.

Most importantly, the constitution should provide for a robust process of impeachment of the chief administrative officer, ministers, senior bureaucrats, army generals, senior police officers and senior local administrators.

Among the unhelpful options to put a new government in power are a military coup to dissolve the government and a recourse to royal prerogative. A soft power option would be to use Section 87 of the current constitution which permits the government to appoint advisers. Thus, the Yingluck administration could appoint special advisers to the prime minister and all ministries with the appointments to include plenipotentiary authority to veto acts and decisions of the prime minister and ministers.

Prime Minister Yingluck with consent from her special adviser could appoint a new set of ministers so that 30% of the cabinet could come from the Pheu Thai Party, 30% from the opposition, and 30% from respected civil society leaders.

The new interim cabinet again under Section 87 could appoint members of a constitutional convention and charge them with advising the government on the draft of a new constitution.

Stephen B Young is global executive director of Caux Round Table. The article is based on his recent talk at the Sasin Graduate Institute of Business Administration.