Jatuporn in - at Yingluck's expense?
Opinion

Jatuporn in - at Yingluck's expense?

Nearly two years ago, sitting from across the table, I listened to Jatuporn Prompan complained about being sidelined from the cabinet by Prime Minister Yingluck Shinawatra.

He said the red-shirt United Front for Democracy against Dictatorship (UDD) was not being appreciated enough. He warned that Pheu Thai should not count on the guaranteed loyalty of the red shirts.

It was bitterness talk. Mr Jatuporn may have been shunned by Ms Yingluck, but big brother Thaksin Shinawatra has been generous to him - as Thaksin usually is with those who work for him. That's why so many do. That made Jatuporn a loyal but disgruntled soldier.

But here's a chance for him to shine again (although one hopes not in a literally fiery blaze). Thaksin and Pheu Thai need muscle in the street. Jatuporn is the bulging bicep. 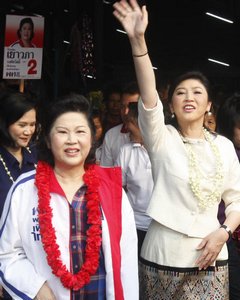 Sisters and rivals: Yingluck (right) and Yaowapa at a Chiang Mai election rally. Only one can be prime minister.

So he's officially elected as the new leader of the UDD, with Thida Tawornseth relinquishing the post.

Now. Remember back in 2010, when it was time for battle. Ms Thida and Veera Musikapong were nowhere to be found. Mr Jatuporn and Natthawut Saikua were in charge. (Mr Natthawut was named secretary general of the UDD during last week's Jatuporn promotion.)

There's a time for activists and ideologists, poster boys and girls and brand ambassadors. But then there's a time to bring in the big gun. Mind you, though Mr Jatuporn may be hardcore and firebrand, he isn't a militant provocateur. There are other people for that.

Jatuporn warned of a looming civil war, but assured everyone that the UDD will be peaceful and unarmed. Of course. A lot of people claimed similarly for 2010.

In Mr Jatuporn's version this week, every 2010 exploding bomb, burnt building, fired shot and dead body in the street were either the work of the elitist, fascist, yellow ammart agents or, at the very least, an invisible third hand. The red shirts were entirely guilt free, completely innocent, truly, really, no kidding.

At the same time Mr Jatuporn was putting this out, a lot of people were claiming on behalf of the People's Democratic Reform Committee (PDRC) of 2014 that all members of that group were equally and entirely free of guilt, completely innocent, yes, obviously, absolutely, kid you not.

So it's the proverbial "same same, but different" for both sides.

Meanwhile, Ms Yingluck is the one being forced to the sideline. For some two years, she was the compromise that both sides could live with. She was the non-threatening, un-dangerous representative of Thaksin.

All she had to do was smile and stumble through the script. People made fun of her, but making fun is better than making coup d'etat, making street protests or making impeachment.

There isn't a coup - yet - but there have been plenty of street protests and two impeachment bids, one over the rice-pledging scheme and one over the 2-trillion-baht infrastructure borrowing scheme. 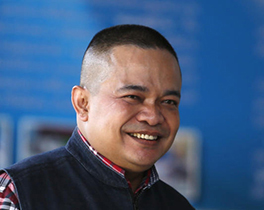 Street protests lead to political pressures that may bring political changes. Thus far, the PDRC has been making progress in agitating for a ban of Ms Yingluck.

If this should succeed, her replacement might be the less known but more formidable sister, Yaowapa Wongsawat, wife of Mr Somchai, who was prime minister just before Abhisit Vejjajiva, during the brief People's Power Party (PPP) governments of 2007-8.

Ms Yaowapa may lack the smile and charm of younger sis, but she more than makes up for the superficial with actual skills and capabilities. Many believe she, along with Thaksin's ex-wife Khunying Khunying Potjaman na Pombejra, are the real brain and brawn in the Shinawatra clan.

This of course brings us back to the agenda of Suthep Thaugsuban, leader of the PDRC. This agenda states it is not enough to bring down the Pheu Thai government. It defines victory as getting completely rid of the entire Shinawatra clan, its political power and all influences. As yet, however, Thaksin still has other players to put in.

Ms Yingluck herself may be safe. Or maybe not. Unintentionally, she has placed herself, and her brother has played her, into a corner. Intentionally, Mr Suthep has put her into a corner. She is expendable. But the Shinawatra political power must be secured.

Regardless of how this may play out, matching street protest for street protest is a dangerous game. We had a taste of it in December at last year's Ramkhamhaeng shootings, which led to injuries and deaths on both sides. But danger is a part of a power struggle. It's simply playing the game.

So here we have a man with terrorism charges pending for years, working for a man running away from corruption convictions for years. They are fighting against a man with arrest warrants out for months, working for invisible hands that cannot be charged with anything.

Then there's a woman, or a clone according to her brother, facing two impeachment bids. She really needs to stop crying and show strength of character, assuming she has any.

Welcome to Thailand. There are stranger things in this world, but not that many.