The political situation in Thailand is slowly but surely ratcheting up to something akin to a civil war. Civil wars are by nature bloody affairs that bring out the worst in everyone, let loose the extremists on all sides, and have no real heroes. 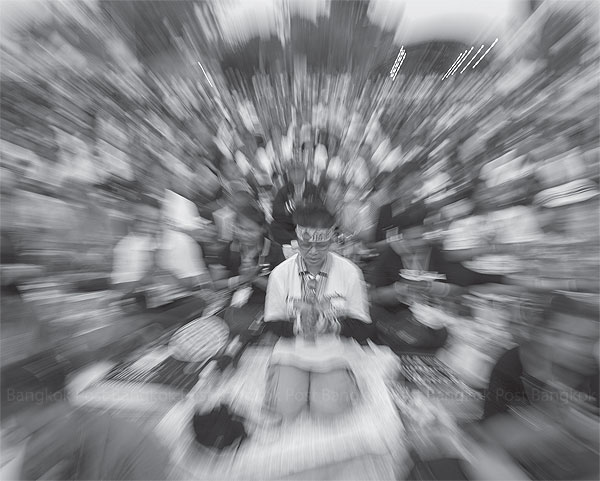 A group of anti-government protesters prays during a rally at Lumpini Park. Any chance of a political settlement looks dim, however, as the anti- and pro-government movements both promise to outdo each other in mass protests. Pattarapong Chatpattarasill

To avoid civil war, there are a few possibilities. All, unfortunately, are fraught with risk.

The first is to proceed as constitutionally as possible. The annulment of the Feb 2 election has embittered many, if not the majority, who feel that once again that popular sovereignty has been thwarted.

Although the constitution does not specify, the most "normal" response to an annulled election is to hold it again, under the terms of the annulled election. If under the first attempt, the government is asked to set an election between 45 and 60 days after the dissolution of the House of Representatives, then the clock begins again once the first election is officially annulled. That would mean that the new election should be held between May 5 and May 15.

There has been talk in political circles that the new election could be delayed for months. Doing so would be the least constitutional. There is nothing in the constitution suggesting the election should or could be delayed. Citing precedent from a similar situation in 2006 would be allowable only if the coup makers had chosen to amend the 1997 constitution. Instead, they abolished it. So citing the situation of 2006 is off-limits.

Some may say the political situation has not been resolved, that parties have not had a chance to come together to negotiate. There is nothing in the constitution that stipulates that political conflicts need to be negotiated before elections can take place. Political parties are free to do so if they wish. But the clock is already ticking and elections should be announced as soon as possible.

Finally, there is no doubt that the People’s Democratic Reform Committee (PDRC) would oppose a new election without "reforms" occurring first. That is the committee’s choice. But it is not the right of its members to obstruct registration of voting or the polls on the day of the election. Whether the election is later nullified or not, the act of obstructing elections is illegal.

A second possibility is to throw the entire framework of government back to the people. The present constitution came in on a referendum, and there is no reason the people could not be asked again if this is the constitution they want or not. The 2007 charter was premised on the base illegality of the 2006 coup. Its referendum was fatally flawed. Criticism of the constitution was severely curbed and there was no clear alternative if it was voted down. Worse, it has proven almost absolutely impervious to change.

When elections become too complicated (as they seem to have become now), referendums are the most direct route to popular sovereignty. Referendums are used to good effect in Switzerland, and they generally limited bloodshed, such as in Crimea and coming up in Scotland.

If in a run-off between the 2007 constitution and the more democratic "people’s constitution" of 1997 and the former wins, then Thailand goes back to its present intractable situation. New elections are attempted and we will all see how it goes.

If the 1997 constitution were to win, then the two major parties could agree on a set of reforms that becomes common in all party platforms for the first election. The more progressive bits and pieces of the 2007 constitution could be part of that set of reforms.

With a new constitution, members of all independent agencies would be dismissed and new members would be chosen under the much better nomination system of the 1997 constitution.

One suggestion would be to eliminate the term "neutral" from the Thai political lexicon. The "neutral" approach of the 2007 constitution is leading to disaster and debasing the integrity of Thai law as a whole.

To start with, the composition of a new constitutional court, say, could be made up with four nominees from each side (Pheu Thai and Democrat Parties, respectively). Such nominees would be considered on their legal background, and not on their "neutrality" or party affiliation. Those eight would have to agree on one person to nominate to take the ninth position. After that, it is the prerogative of the ruling party to nominate replacements to be approved by an elected Senate.

By acknowledging that Thailand is split politically, the country could free itself of the façade of neutral brokers. It recognises that "politics" is not what politicians do but rather the exercise and constraints of public power by any party. Under this definition, many groups are involved in the political project: civil society groups, social movements, elected officials, bureaucrats, and even the Crown Property Bureau and the monarchy. "Politics" is no longer a dirty word; it’s just the dynamic underlying any political society.

A national government dedicated to constitutional reform under a newly revitalised 1997 constitution could have a limited mandate of one year. It could set into place some safeguards to ensure that the rights of the minority or minorities be respected.

To have a year-long national debate on the future of Thailand would require that any laws restricting freedom of speech be decriminalised. The stifling presence of Section 112 of the Criminal Code needs to addressed, those charged or jailed under the article need to be released, and dialogue needs to include open discussions of the status of the monarchy and its assets. These laws only put the long-term interests of the institution at risk.

The third possibility is to let things continue as they are. Rhetoric is heating up on both sides. At some point soon, Thailand will find itself in a civil war. When that day comes, that situation will create a dynamic of its own, largely out of control of anyone.

On the Pheu Thai side, to call for elections or a constitutional referendum would take courage. It has conceded all it can to the forces opposed to it. But now it needs to be proactive and champion the principle of democracy. Don't just return the vote to the people; let the people choose their own constitution.

But Pheu Thai also needs to learn how to work with the Democrats on some level. Political party reform, tax reform, and a cleaner government are in everyone's interests.

The PDRC and the Democrat Party may be opposed to either new elections or a new constitution. But if they want to exist and persist in a democratic world, the present road of obstructed and annulled elections, of perceived bias in independent bodies, of making up the rules as they go along — will only lead to ruin.

Time is running out.

David Streckfuss is an independent scholar based in Khon Kaen.